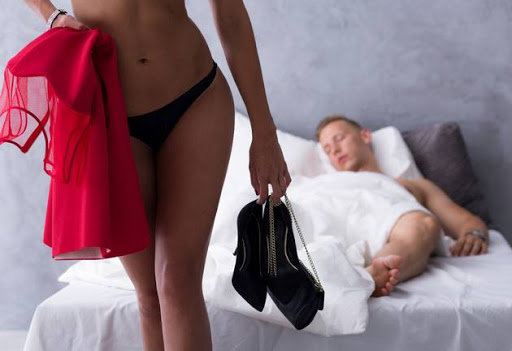 Your risk of contracting HIV during casual sex is based on the type of sex play you engage in and what safe-sex methods you use, says Dr Tlaleng Mofokeng.
Image: iStock

I used to be really brilliant at one-night stands.

In fact the last date I went on was going to be one. We'd met online, chatted for a while, then lined up our first date. We went for pizza, as I recall. I liked him enough, but I wasn't completely sold, and I wasn't looking for anything serious at the time. But I'd shaved my legs and worn the expensive perfume, so I wanted to get my money's worth. Plus, I live in Cape Town, so you never know when a drought will set in. That was four years ago. (Although we may not be together much longer, after this column.)

Being one-night-stand-fit is a skill that not all women have. Guys seem to find it easier to go in without strings and come out untethered. I've always maintained that it's because their bits are on the outside, so it's easier for them to wave them around freely like that. While as women, everything we've got is on the inside. Freud would have a field day.

But there's something incredibly freeing and empowering about choosing to have a one-night stand, especially if you manage to walk away afterwards without guilt or any other feelings, like a rash or burning sensation when you pee. Plus these days Tinder makes hook-ups easy (and therefore one easy, too, I suppose).

I have a friend who had a one-night stand with a doctor, which turned out to be fortuitous, because when the main event was over and it was time to step away with a smile and a wave, they couldn't find the condom anywhere. They even checked the ceiling (she's double-jointed). So in the end he wrote her a script for the morning-after pill on his way out the door. I like the element of multitasking she brought to this adventure, and she's inspired me; when my guy breaks up with me for writing this column, and I have my next one-night stand, I'm going to do the smart thing and ensure it's with a tax accountant.

It's no fun if you're left with mortifying regret: Jason Mykl Snyman

The term one-night stand comes from the olden days when a travelling show or circus would stop by in a town - which they called a stand - for one night only and perform for the locals. A one-night stand with me, for example, isn't much different.

There's snack food involved, booze, some animals, a good chance of fireworks, costumes and music that plays whenever I take my pants off - it's the Imperial Death March from Star Wars. Afterwards, there's a whole lot of applause and the next morning you're left with sensory overload disorder and mortifying regret, thinking over and over again - I should not have licked that. I should not have licked that.

Fortunately, my latex allergy and fear of herpes have prevented me from participating in too many of these catch-and-release situations. In the last decade, the closest I've come to having any night stand at all was this beautiful mahogany night stand I tried to buy from a fancy store - but my card was declined, and I had to do the walk of shame anyway.

I've always used protection, though, like a fake name and a fake phone number. If movies are anything to go by, 100% of these encounters will result in unplanned pregnancy, and I don't want to be getting a bunch of messages two months later saying "We Need To Talk" - or worse - having the whole thing validated with a Facebook friend request the next morning.

Call it what you want. The old smash-'n'-dash. The hit-it-and-quit-it. A premature evacuation. Adults need play time too, but be careful out there, folks. A one-night stand may be fun while it lasts, but syphilis is forever. If that all seems too risky to you, best avoid it altogether and get back to the eons of loneliness coming on round the bend.

Personally, I can't think of anything worse after a night of drinking than waking up next to someone and not being able to remember their name, or how you met, or why they're not breathing anymore ...

• E-mail us if there are any topics you'd like to hear about from a She Said/He Said point of view: amillionmilesfromnormal@gmail.com