40% of clippers at township barbers contaminated with blood: study 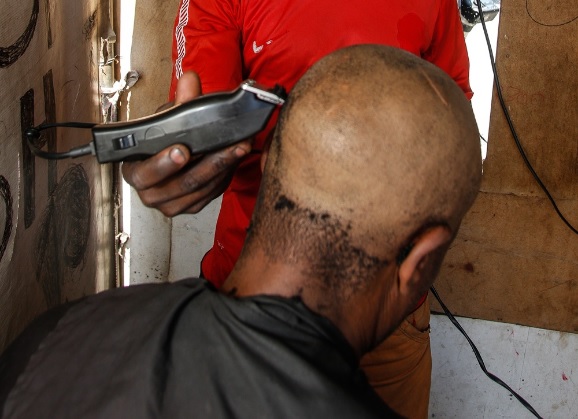 Researchers found that all of the barbers involved in the study cleaned their clippers after each client, but not in an approved way.
Image: Simphiwe Nkwali

Nearly half of the clippers used by township barbers are contaminated with blood.

The hepatitis B virus was found on four out of 50 clippers examined by University of Cape Town researchers, who said the equipment was “a possible public health risk”.

Although HIV was not found on any of the clippers from Langa, Gugulethu and Bonteheuwel, the head of dermatology at UCT medical school, Nonhlanhla Khumalo, said this did not mean there was no risk of contracting HIV from clippers.

“Closer in time to the source contamination, clippers may have had levels of infectious HIV that could have posed a risk to clients,” she wrote in the South African Medical Journal.

Closer in time to the source contamination, clippers may have had levels of infectious HIV that could have posed a risk to clients

Khumalo and her team collected the clippers immediately after they had been used for a haircut — mainly a clean shave, or “chiskop”. In Bonteheuwel, the most popular style was a brush cut.

A study in 2007 found that a third of men bleed during clean-shave haircuts, but 42% of the clippers in the latest study had blood on them.

Khumalo said all the barbers cleaned their clippers after each client, but not in an approved way. More than 80% used methylated spirits, which had no antiviral properties, and 8% used an open flame, for which there was no data on efficacy.

“The new generation of accelerated hydrogen peroxide-based environmental surface disinfectants are bactericidal, virucidal, mictobactericidal and fungicidal. The formulation is safe to use and has a high compatibility profile for various materials in addition to being a fast-acting intermediate-level disinfectant.”

10 things you need to know about HIV self-testing

BioSURE HIV self-test is now available in South Africa at some Dischem branches‚ Spar stores and at some Pick n Pay supermarkets for people to test ...
Lifestyle
4 years ago

Khumalo said the UCT study produced as many questions as answers. “We do not know how virus levels on clippers decline as the clippers move through hair as they are used on subsequent clients.

“It is unlikely that the hepatitis B levels detected on the clippers would pose a risk to a client, but closer to the time of the source contamination there may have been levels that did pose such a risk.

“We are also unable to determine whether the viral DNA levels detected represent infectious virus, or damaged virus no longer able to cause infection.”

• This article was originally published in Times Select.

Killers: Here are the top 10 things most South Africans die from

One in five South Africans die from unnatural deaths such as crashes‚ assaults‚ drowning‚ smoke inhalation or poisoning.
News
4 years ago

The life of a woman who has been taking antiretroviral drugs since 1989 has dramatically changed as she no longer has to queue at her local congested ...
News
4 years ago