Are these really the very best pictures - and bios - of men offering themselves for dates online, asks Paige Nick 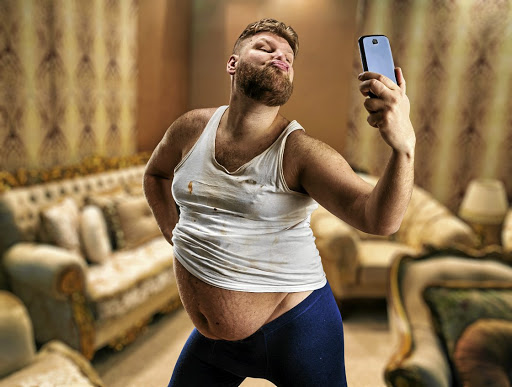 Is that selfie really the best choice for your Tinder profile pic?
Image: 123RF/nomadsoul1

Dating online is many double-barrelled things; eye-opening, soul-destroying and hilariously ludicrous. But the one thing it never is, is dull.

I was swapping war stories with a newly divorced friend, and we decided to do a Tinder Duel. The rules are simple. You both share your most recent match and compare what the universe, read "The Algorithm", is sending your way.

It's like that Super Trumps card game we used to play as kids. But instead of pulling a card with a picture of a car and comparing things like kilometres, cc's and kilograms, you pull out your most recent online dating match, and compare things like, kilometres away from you, profile pic, bio and of course kilograms.

She went first, bam! Picture an overly tanned 29-year-old, lounging on his bed, in nothing more than a pair of the briefest of red briefs, a set of abs you could grate cheese on, an honours degree, and something resembling a stale cocktail roll shoved in his pants. His bio actually contained the words, "part-time superbike racing driver".

The competition was stiff. To say the least.

My turn. Boom! Mine was at least fully clothed. Well, in the loosest sense of the word. His picture was taken from an awkward angle that highlighted an oddly shaped bald spot, among carefully arranged strands of orange hair. He was also moving, eating, and in the middle of a sentence, so it was hard to make out any of his features in too much detail, but perhaps that was intentional.

His fashion style in this picture (the only one supplied) is hard to describe. Maybe "belly-popping" sums it up? Or "homeless man at cocktail party"? Scuffed shoes, something awkward happening in the crotch area of his pants and a faded jacket. I think if you could smell a photograph you'd know all about it. If I had to guess his line of work, I'd go with paedophile.

Two things strike me as I play. The first is, the dating site's algorithm is messing with me. Not that I want the Calvin Klein douche. At least my guy can afford clothes, even if only just.

We all know that looks aren't everything. But you only get one chance to put yourself out there

The second is the weird choices people make. Say you decide to date online? It's a good call. Everyone deserves to find their someone, or their some-seven. Maybe you're not blessed with the most dynamic looks, or the most teeth, or the best dress sense? That's alright, as my mother says, "every pot has its lid" and we all know that looks aren't everything. But you only get one chance to put yourself out there.

So surely the picture you post is your best one, or at least your most fascinating one? A picture that sums you up, as much as any one picture can. One that shows you as an interesting, multifaceted human being, preferably clothed. And if you don't have one like that, well, there's a good chance you're holding a phone with a camera on it. It is after all 2018. Surely you could take 50 selfies (not in the bathroom please) and pick a half-decent one?

And before you slate me for being superficial, the same goes for your bio. One shot, mate. Sell yourself in a sentence. "Whar u see is what u get!", "Unemployed and Loving It", "Less talk, more action!!!!!" Or "Whatever" (and I quote verbatim here), are these insights into the mind of a person we're scrambling to get to know?

But what do I know? I don't have this relationship thing even half figured out. It's possible Mr Cocktail Sausage Pants or Mr Homeless Paedophile have the right idea, and

Madeline Holden is on a one-woman crusade to help men take better photos of their penises. Her Tumblr, Critique My Dick Pic, aims to increase the ...
Lifestyle
4 years ago