Escape the rat race: how to live a 'conscious, curious & elegant' life

Claire Keeton chats to John Sanei, author of 'Magnetiize', about why he believes we need to be more focused on purpose than profit 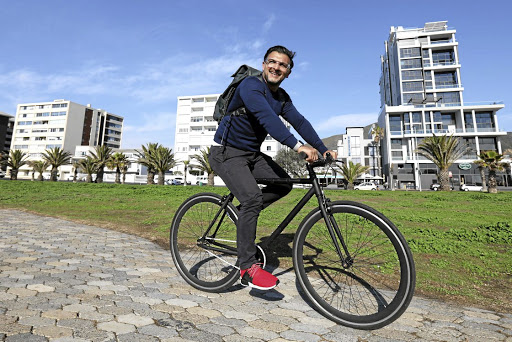 John Sanei is no palm reader but a futuristic thinker, with his finger on the pulse of global and tech trends, in particular "conscious" living.

The 42-year-old dynamo cycled to our interview to discuss his new book, Magnetiize, which is about pursuing a "conscious, curious and elegant" life. Think Barack and Michelle Obama, his heroes.

The "old John" from Joburg would have pulled up in an BMW M3 convertible with a R100,000 watch on his wrist.

"I came from a single-mom family where we didn't have money. I needed to show people I had money by wearing expensive clothes and watches and by owning impressive cars and houses. It was rubbish," he says of his flashy lifestyle then.

The "new John", with an Apple watch for tracking activity, rides a bike in Cape Town where he lives and rents an apartment - even though he has much more money.

"For me luxury is getting onto a flight with a credit card and being able to go anywhere at any time. Success is about doing what you want, how you want, with whom you want," declares Sanei, whose lifestyle, split between Cape Town and New York, demonstrates this.

Stopping the chase - the high-fevered 21st-century pursuit of money, power and branded possessions which are never enough - to interrogate what's behind it is a key theme in Magnetiize, a clear and easy read.

"So please tell me, when did the race start? Who are we competing against?" asks Sanei, who has seen executives showing off to each other about how hard they work by sending e-mails at three or four in the morning.

Sanei had made and lost a fortune and his wife, by 40, by chasing goals based on primal desires, not purpose

"That's how addiction and depression start," he warns, adding that he aims to get to bed by 9pm. "Nothing good happens after nine," jokes the tattooed Sanei, who is an early riser. "You eat bad food. Watch bad TV."

"For so many years I was just running," says Sanei, who had made and lost a fortune and his wife, by 40, by chasing goals based on primal desires, not purpose.

"I don't say 'stop running' but I want people to be conscious of their reason for running, what motivates them. The reason for your running is key to heading towards the light not away from the darkness."

"For teenage boys this chasing is all about sex. For companies that behave like teenage boys, it's all about money, power and one-sided satisfaction."

Magnetiize, released this week, is about how to stop the chase, develop adaptive intelligence (along with EQ and IQ) and find your purpose, with examples of what Sanei means by this process.

The first step in his shift was to face the shadows of his personality and the mental obstacles in his past - finding out who is the 'I' behind the I (hence the two i's in the title) and learn to trust his heart in making decisions. He now chooses excitement.

"This leads to energy and creativity or what is called flow," he says, quoting Andrew Arnott on the depth that comes from prioritising your heart: "My head is a swimming pool, my heart is the ocean."

The next step after this micro inspection is what he describes as "mega exploration of future trends like 'conscious capitalism'." This, Sanei believes, is about "cathedral thinking" and building a sustainable business (or life) more focused on purpose than profit.

It's the simple things in life - and a few simple habits - that bring us closer to happiness, say those who study emotional well-being
Lifestyle
4 years ago

Space X CEO Elon Musk and John Mackey of Whole Foods are quoted as examples of this. Sanei says his examples are mostly foreign because that's where matured markets, with hyper-informed consumers driving conscious choices like vegan-friendly San Francisco, are found.

Brash cities locked into conspicuous consumption like Johannesburg, Miami, Beijing and Dubai are still developing. People there are excited about making money and will choose sports cars over bikes, he says.

A "trend and innovation" specialist, he is in demand for his understanding of "disruption" in business and for his knowledge on how to adapt for the future, in which he sees less need for possessions. Look at how Uber has reduced the need for cars.

His first bestselling book, What's Your Moonshot?, was about thinking big and embracing the disruptions of life as we know it.

He recommends people work with a coach to find their purpose in life. "Don't wait until you have money. Make the investment and start the process of taking your memories from unconscious to conscious.

It's official: the meaning of life has been commodified

Born out of Google, the O Summit teaches that there's a methodical way to find your life's purpose - oh, and that you'll find it at work, says Paula ...
Lifestyle
4 years ago