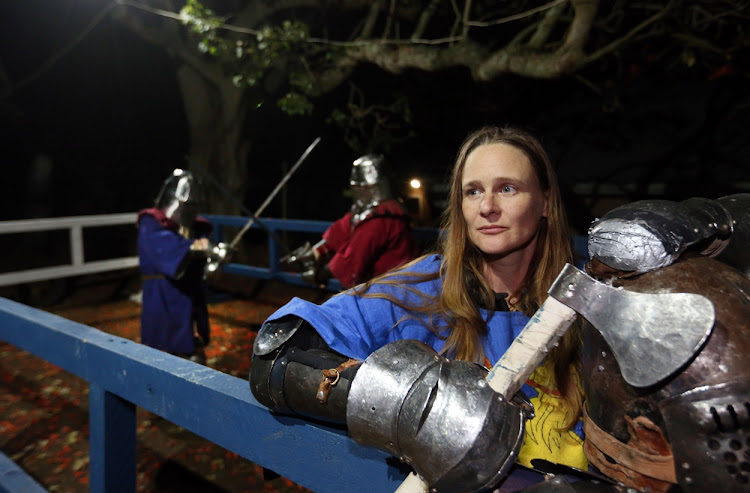 Medieval Combat fighting champion Christa Martin believes she is in at the start of a big sport.
Image: Jackie Clausen

Like most slay queens, Christa Martin puts thought and care into her outfits. Her style is old-fashioned. It's of an era when the term "slay" brought to mind myths of knights and dragons; and the garb she now dons was what warriors dressed in.

The dream has taken her to fight in Scotland, Poland, Luxembourg and Denmark in the seven years that she's been a member of SA's first medieval combat team to compete internationally.

This year she placed fourth in long-sword fighting against players from Ireland, New Zealand and Quebec at the world championships in Scotland. Another of her personal highlights was winning bronze at the 2015 championships in Poland.

"Sword-fighting is all about being able to use a sword and shield and being able to score points." There are two general types of fights - one-on-one duels and team fights.

"In team fights the main aim is to get the other team down. There are two ways to do this: either by throwing them down, which is called grappling, or by hitting them so hard that they fall down and can't get back up."

Medieval combat fighters use blunted weapons and must adhere to safety standards set out by the International Medieval Combat Federation, an organisation of 24 member nations which was founded in 2013 to develop the sport.

Martin fights alongside her husband, Josh Suttie, whom she met at a tournament. "He's been doing this for 17 years. I fell in love with him every time he hit me on the head with a sword."

She recently launched free medieval combat training classes on Monday evenings at The Workshop in Durban's CBD. She's hoping it will pique more black people's interest in the sport.

"I thought, at some point in the future, this sport is going to become more popular. I don't want to get to a point in 20 years where it's a real f**k-up like rugby, where there's no representation."

Martin's team, the SA Rogue Squadron, meet regularly to train in Hillcrest, about 30km outside Durban. "The idea behind this session was to open it up to people who can't come to Hillcrest. The problem was that there were a lot of people who were interested but couldn't do it because there's no public transport. It's difficult for people who don't have their own transport." 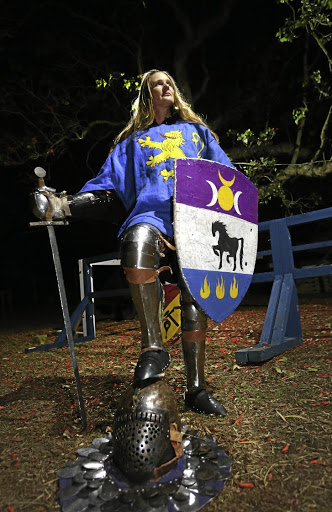 Nisbert Kembo, a friend of Martin's, is one of the first few black people to join in the training sessions. He began training a month ago. "I wanted something with physical contact," says the self-employed leather craftsman. "I would love to see more kasi guys getting into it. I'd like to get good enough to start participating in matches by December. I really feel like I'm getting into it."

Their long-term goal is to train enough newcomers to form other teams besides the Rogues to play at international level. SA is the only country from Africa represented. The sport has its "Big Four" - Russia, Ukraine, Poland and Belarus, with Russia having a pool of thousands of active fighters. In SA, Johannesburg and Durban are where most of the fighters are.

Medieval combat is a challenging sport that requires stamina and commitment, says Martin.

"You have to get strong and you have to get fast. The harder you train, the faster you can fight." Not forgetting that all of this fast, hard fighting has to happen under the weight of 20kg to 30kg of armour.

"There are a lot of people who love the idea. They try it out by doing soft-sword and they love it. But then they put on the armour and then we never see them again," she says, laughing. "It does require lifestyle changes - I've had to make some myself. When I started I had to drink less alcohol, eat better and cut down on my smoking."

For some the historical aspect of the martial art holds allure.

The sport originates from the tournaments of the European Middle Ages when, Martin says, nonlethal fights were staged to keep standing armies fit during times of peace. "We try to strike a balance between safety and authenticity. All your armour has to come from the same period and the same area. It has to be authentic."

Kendo: South African warriors embrace the way of the sword

There's lots of screaming and it looks very frightening, but kendoka say it is a practice of calming and discipline
Lifestyle
4 years ago

Online self-defense videos often come with laudable intentions and good advice, but they could actually put you in danger, say martial arts experts
Lifestyle
3 years ago