The surprising health benefits of hanging art in hospitals

There is a debate about whether figurative or abstract art works better in hospitals. But it is agreed that any art is better than none at all 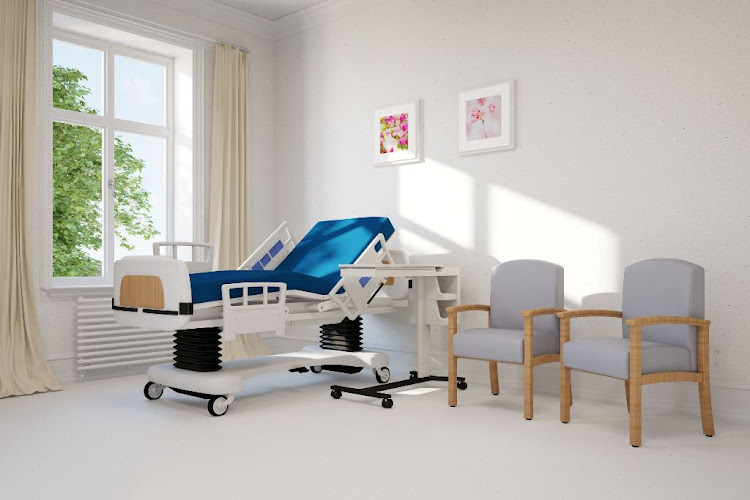 Art in hospitals can help reduce anxiety in patients, as well as their stay in hospital.
Image: 123RF/Stylephotographs

In the 2004 Michael Mann action movie Collateral, Jamie Foxx's cab driver character keeps an island postcard in his sun visor, a 148mm x 105mm escape from the mind-numbing repetitiveness of his daily life. And when it comes to mental escapes, there are many scenarios that call for them: you're bored at work, stuck in traffic (but without losing concentration either), going through a boring phase in your relationship or - perhaps worst of all - stuck in a hospital.

Whether you've been a patient or visitor, if you've ever spent more than a few minutes at a hospital, you've probably noticed the art. From flowers in vases to boat scenes and grazing giraffes, many a hospital's walls are brought to life with paintings.

Foxx's character in Collateral keeps the island postcard in his car as a regular, mental mini-holiday from the greyness of his existence. Hospital art is meant to soothe people and make them forget they're in a hospital.

This is not a new practice, of course: a 2016 paper titled Visual Art and Arts Therapy for Healing in Hospital Environments dates back the use of art as part of healing to fifth-century Greece (and later, to 14th-century Italy).

BUT DOES IT WORK?

According to numerous studies, the answer is a resounding "yes": having art on hospital walls and in hospital rooms does positively affect patients. From a personal perspective, I've always found being holed up in a hospital room doesn't suck as much when I can kill some time critiquing the paintings on the walls and wondering who chose them, even if this "discussion" takes place in my head.

Citing a 2003 study, the previously mentioned 2016 paper notes that "there has been evidence of the increasing display of artworks, with themes of natural images, which have positive effects on health outcomes. These effects range from decreased anxiety in patients, increased tolerance to pain and reduced periods of stay in hospitals."

This is what really happens when you go under the knife

A 2010 Scottish review published in the Journey of Royal Society of Medicine (JRSM) concludes that "art in hospitals is generally viewed positively by both patients and staff, but that the quality of the evidence is not uniformly high".

ART IS GOOD - BUT DOES IT DEPEND ON THE KIND OF ART DISPLAYED?

Some believe that abstract art has a better effect on patients, while others believe figurative works (such as landscapes) provide a more obvious - and therefore better - escape from a hospital environment.

The JRSM review is in favour of figurative art, stating: "Effects may be mediated by psychological responses to colour hue, brightness and saturation. Colours that elicit high levels of pleasure with low levels of arousal are most likely to induce a state of calm, while those causing displeasure and high levels of arousal may provoke anxiety.

"The fact that patients frequently express a preference for landscape and nature scenes is consistent with this observation and with evolutionary psychological theories which predict positive emotional responses to flourishing natural environments. Contrary to a view which may prevail among some contemporary artists, patients who are ill or stressed about their health may not always be comforted by abstract art, preferring the positive distraction and state of calm created by the blues and greens of landscape and nature scenes instead."

But a 2017 Danish study disputes this, preferring abstract over figurative, though explicitly stating that any art in a hospital is better than no art. The researchers at the Aalborg University Copenhagen explored "the potential of visual art as a generator of wellbeing" by visiting hospitals and interviewing patients. They concluded that it doesn't really matter much whether hospital artwork is figurative or abstract - though the abstract art seems to provoke deeper thinking in patients than something as straightforward as a landscape painting.

The authors of the study found that "art and wellbeing was not significantly related to the artwork being figurative or abstract ... The notion that the ambiguity of abstract art generally leads to stressful effects was thus called into question by these findings."

Researchers at Cleveland Clinic in the US found the idea that landscapes are best in a hospital environment is outdated and that, instead, "diversity of art also benefits patients". The clinic states on its website that it has over 6,200 artworks in its collection, which includes contemporary works by living artists. The subject matter extends beyond nature, including themes like pop culture and "the human condition".

A survey of former patients conducted by the clinic found that 73% of respondents believed that the art "significantly improved their mood", especially among patients who were treated for breast cancer, anxiety and post-traumatic stress disorder. About 61% said their stress was "significantly reduced", while 39% reported their pain improved as a result of the art.

If a painting (or video installation, as in some hospitals around the world) can distract you from thoughts of mortality - yours or someone else's - it's a welcome relief. Because there are some things medicine cannot fix, such as the anxiety of sitting in a hospital waiting room before taking some tests to see if anything is gravely wrong with you.

Whether the art in question is any good is a discussion for another day.