Just how healthy are these 'wholesome' snacks anyway? 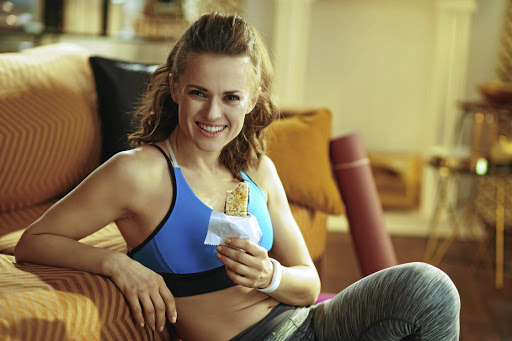 If your health bar contains a lot of sugar, it might be a better idea to get your protein fix from some biltong or nuts instead.
Image: 123RF/Citalliance

The ancestors of our modern-day "health" bars were more interesting than you might expect. These chaps were called Space Food Cubes and were developed by Pillsbury in the 1960s, for astronauts.

Soon after, Pillsbury changed the shape and developed Space Food Sticks for the general market (and astronauts as well), to highlight their association with Nasa. The stated intent was that the stick provided "nutritional balance", but, much like today's bars, no basis for the term nutritional balance was given. Whether in space or in our earth-bound lives, these compact rectangles of "energy" and "health", rescued from obscurity and made popular again in the '80s, just keep going.

Today they come in endless forms - from energy and sports bars to low-carb/high-protein and superfood versions. They speak to all our different neuroses, and to our increasingly limited time.

Protein bars make us buff, lite bars keep us thin, energy bars get kids through school. What they have in common is that they sell the idea of super- and condensed nutrition. Though many of us are fully aware that the realm of health bars is hardly as holy as it purports to be, it's still worthwhile examining just how close they come to anything like reasonable nutrition.

The market is awash with these chewy or crunchy rectangles, and so of course there are bars and bars. A sampling of a bunch sheds some (mostly sugary) light.

Futurelife bars are everywhere. I'm chewing on the "Lite" version. It's as pointless as any "lite" foods, because all that means is less fat. The idea that less fat equals more health remains the worst diktat of mainstream nutritional thinking.

Sugar is the issue, and the total sugar in Futurelife Lite is 14.6g per 100g, which puts it pretty close to Coca-Cola. At least there is generous folic acid, so if you're mountain-climbing and pregnant, this bar is useful.

The ingredient list is epic (the hallmark of super-processed foods), with the main ingredient being "SmartProtein 3-D blend". This, unlike daft or only moderately intelligent protein, is a mix of whey protein concentrate, soy protein isolate and milk protein isolate. Does that sound smart? No. But at least the bar is delicious.

In the more lunchbox-friendly bracket, Jungle energy bars don't make high nutritional claims, but when you see "energy" and "high in fibre" on a pack, you're swayed. I'm checking out the yoghurt flavour. The first four ingredients are oats, sugar, golden syrup and palm oil. Oats is doubtless a better choice than deconstructed soy, but the story as a whole isn't fantastic.

With 0.1% yoghurt powder involved, should the word yoghurt really be allowed, writ so large, on the packaging? I guess you could argue that only an idiot would believe a bar could provide any of the benefits of yoghurt, but it's misleading all the same.

The bar contains 23g of sugar per 100g, which is high, but better than the Jungle's "Slim" bar, which has an incredible 53g of sugar to 100g of product. It's nothing more than a big sweet, but I have to admit that I find it quite toothsome.

Rush bars are in the more current, and more serious "health" bar bracket. The endurance bar (sub-titled natural nutritional fuel) has a lot to say about its own merits: it's free from preservatives, gluten, wheat, dairy, eggs and refined sugar.

Well fine, I guess, but so are almonds, apples and a piece of steak. It's also "crammed full of quinoa, chia seeds & other superfoods". Additionally, it's "high energy, high in protein, and a source of spirulina".

All hail Spirulina, the most super of superfoods

Don't get too excited, though: the nutritional info reveals a generous 39g of sugar per 100g. The ingredients list is short and contains actual foods you might recognise, but sugar from dates and honey is still read by your body as sugar.

The promised spirulina is 0.2%. Considering that little evidence exists to show health benefits from this algae unless taken at volume, it's a bit of a joke. The bar does taste worthily healthy, though, somewhere between putty, dog food and old mebos.

Clicks's Smartbite bar, and Woolworths's Date & Raw Nut bar use the same "no added sugar" trick. No refined sucrose added, sure, but the bars contain, respectively, 50.9g and 59.5g sugar per 100g. You'd be better off with a bar of dark chocolate.

Among the countless other bars eaten and fine-print examined, the Primal Pantry Paleo Bar is worth mentioning purely because its very existence is odd. A paleo diet is by definition a diet of unprocessed foods, and yet bars epitomise processed.

We just like stuff in bar form. It's cute and convenient and maybe that's okay. The odd time-saving bar on hurried days isn't going to kill you, but it's a million miles from a health food. If you're looking for a protein fix on the go, a packet of biltong or nuts should do the trick.

Just how much sugar is hidden in baby food? Shocking facts from a SA study

Wits researchers Karen Hofman and Nicola Christofides are calling for legislation limiting the amount of sugar in the baby foods found on local ...
Lifestyle
2 years ago