Be a lifesaver: baby Mack cancer-free thanks to the generosity of strangers 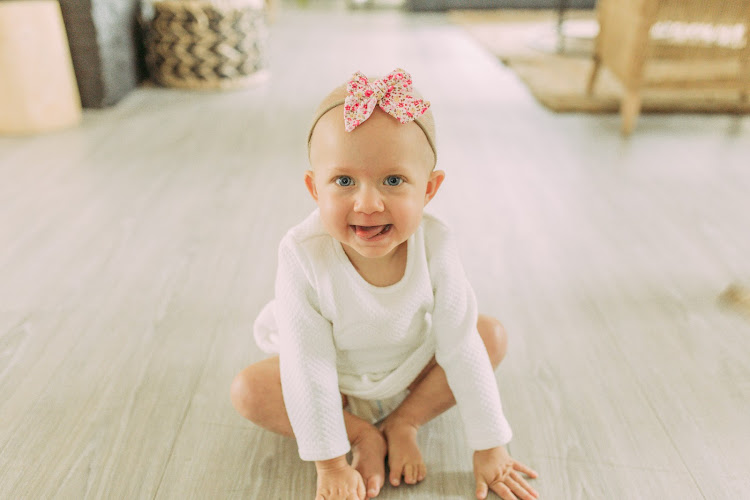 By donating blood and bone marrow stem cells, you can save multiple lives — lives like that of 17-month-old cancer survivor, Mackenzie “Mighty Mack” Friedman.

In May 2022, Mackenzie was declared cancer-free. She reached this incredible milestone just over a year after she was diagnosed with acute myeloid leukaemia (AML), and 100 days after her successful bone marrow transplant. Without regular blood transfusions, Mackenzie wouldn’t have survived her cancer treatment and been able to have a successful bone marrow stem cell transplant.

“We were in complete shock when, in May 2021, we were told that our four-month-old daughter had AML. Until then, Mack, our first child, had been a healthy baby who was meeting all her milestones,” says Mackenzie’s mom, Megan Harrington-Johnson.

“Mackenzie wouldn’t have survived the aggressive chemotherapy and other treatments she had on her cancer journey had it not been for multiple blood and platelets transfusions. Thanks to the generosity of regular blood donors, she was able to get to the point where she could have a bone marrow stem cell transplant.”

Unfortunately, her cancer was extremely aggressive, so she needed aggressive treatment, and ultimately a bone marrow stem cell transplant if she were fortunate enough to reach a stage of remission.

“During her time in hospital, Mackenzie dealt with one infection after another, suffered kidney failure, spent time on a ventilator, and also spent three months in an induced coma.”

Mackenzie’s family had to get her strength up after being in the coma. “She’d lost so much strength and couldn’t hold up her own head or suck on a bottle. In September, Mackenzie was discharged, but had to return to hospital frequently for more chemo to make sure she stayed in remission and to kill off her existing bone marrow ahead of the transplant.”

On January 14 2022, Mackenzie received her bone marrow stem cell transplant and she and her family began the agonising wait to see whether the new stem cells would graft.

“Reaching the 100-day post-transplant milestone was key,” says Harrington-Johnson. “Those were not easy days. Mack contracted some serious infections along the way. Thankfully, she made it through them all.

“Eleven months and four days after Mack was first admitted to the Donald Gordon paediatric oncology unit, she rang the unit’s bell three times loudly to signal the end of her treatment and total healing.

“We are now working as hard as we can to share Mackenzie's story to highlight the importance of both regular blood donation and signing up as a bone marrow stem cell donor with the public.

“We urge as many people as possible to sign up — its free and as simple as swabbing the inside of your cheek with a cotton bud. We especially need people of colour to sign up. Mack was the only white child in her ward and the only one to receive a match. This is likely because we have European ancestry and there are more such people on local and global registries.

“We must encourage and educate more people to sign up and let them know that should they ever be matched to a patient in need of a bone marrow stem cell donation, the process they go through as donors is pretty much as simple as donating a bit of blood.”

Speaking of which, SA is also in urgent need of blood donors.

Less than 1% of South Africans are active blood donors

“According to the SA National Blood Service (SANBS), thousands of patients will die every day in the absence of sufficient, quality blood in stock,” says Dr Noluthando Nematswerani, head of the Centre for Clinical Excellence at Discovery Health.

“Mackenzie, for example, needed a blood transfusion every second day and platelets every other day because of her type of cancer,” says Harrington-Johnson.

According to the SANBS, thousands of patients will die every day in the absence of sufficient, quality blood in stock

Dr Noluthando Nematswerani, head of the Centre for Clinical Excellence at Discovery Health

“Sadly, less than 1% of South Africans are active blood donors. A unit of blood only lasts 42 days after donation and, for this reason, it is important for blood donors to donate regularly. It’s so important that every eligible person get involved as a regular blood donor,” says Nematswerani.

“Discovery Health’s data highlights the need for blood transfusions and blood-related products. Between 2017 and 2022, we have paid out almost R3.4bn for both in- and out-of-hospital claims for donated blood.”

“Any of us might at some point need donated blood,” says Nematswerani. “This blood is given to a wide range of people, from accident trauma patients to surgical and cancer patients (such as Mack), women who are haemorrhaging due to pregnancy or gynaecological complications, premature babies, children with severe anaemia, and others.”

How to become a lifesaver

Keen to donate blood? Here’s what you need to know

Where to sign up to become a bone marrow stem cell donor in SA:

This article was paid for by Discovery Health.

Regular health checks can save you from hypertension, ‘the silent killer’

SPONSORED | Most people with high blood pressure don’t have symptoms, yet it’s responsible for half of all strokes and 40% of heart attacks, says ...
Lifestyle
1 month ago

Could you have a chronic illness and not know it?

Here's how to prevent the silent onset of chronic kidney disease

SPONSORED | Kidney disease often develops without any noticeable symptoms, regular screenings with your doctor can help detect the disease in the ...
Lifestyle
4 months ago