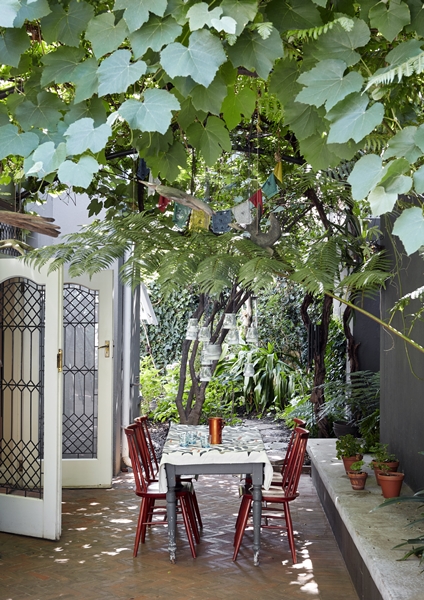 The back courtyard is a leafy haven.
Image: Greg Cox/bureaux.co.za

In Mariette and Peter Theron's garden in the Joburg suburb of Saxonwold, pot plants nestle among herbaceous drifts of flowers.

They peep up through the beautiful combinations of colours and textures, joining the exotic beans, heads of lettuce and strawberries that grow between the flowers.

That's because Mariette likes to move them around, as she might move the furniture and art in the house. "I garden like I decorate my house," she says, "moving things around all the time."

The couple have lived in this house with their three daughters for 20 years.

When they moved in with their eldest daughter, Pascale, now studying at the Eindhoven Design Academy, Mariette was pregnant with their second daughter, Andrea, who has just turned 19. Georgia, their third, is in her second-last year at high school. But they didn't change a thing about the house - not until they'd lived there for 14 years.

The house itself dates back to the 1930s. It was a fairly modestly sized double-storey house with a Cape Dutch gable, a shady porch, tall arched windows and doorways, and a single central bathroom for the whole family to share.

There were large trees in the garden, although the biggest - the reason they bought the house - recently fell, miraculously leaving house, cars, pool and garden largely unscathed. This, as Mariette says, gave them "a good feeling". 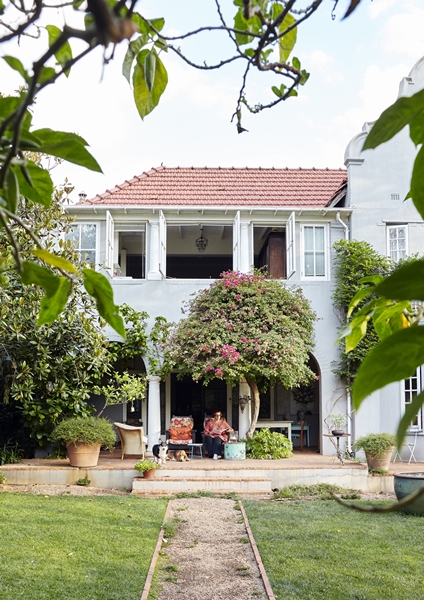 The covered stoep is a cool retreat in summer.
Image: Greg Cox/bureaux.co.za 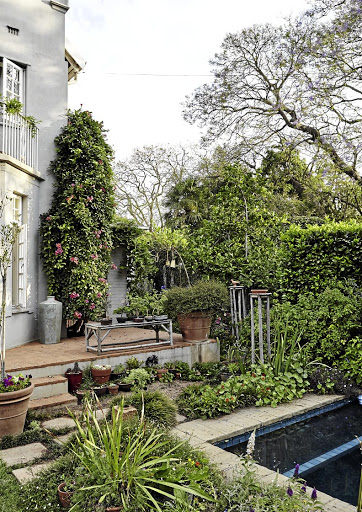 Architect Johann Slee carried out a subtle and respectful alteration. "He's a good friend, and he'd known the house since we moved in," says Mariette. "He always said we shouldn't lose that feeling."

So the structure remained unchanged: the footprint and façade are as they have always been. But Johann opened up some of the interior spaces, swopped around the kitchen and dining room so that the dining room connected better to the kitchen and the living area. He also created en suite bathrooms for each bedroom upstairs.

Outside, he shifted the driveway from the front and centre of the house to the side, clearing a space for the beautiful, romantic garden Mariette and Peter have created. He also extended the stoep so that it wrapped right around the house - making it possible to walk around the outside of the house with ease, which wasn't possible before.

"These floors are incredible," says Mariette, referring to the intricate herringbone pattern in all the new areas. "They're handmade clay bricks from Swellendam in the Western Cape. They call them klompies." 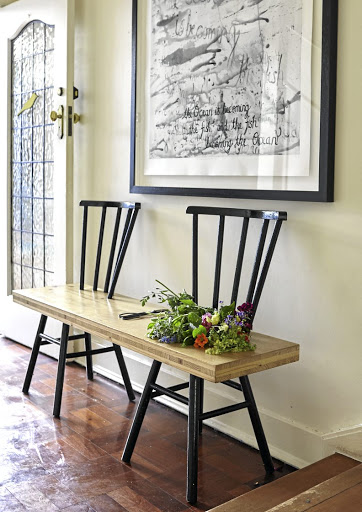 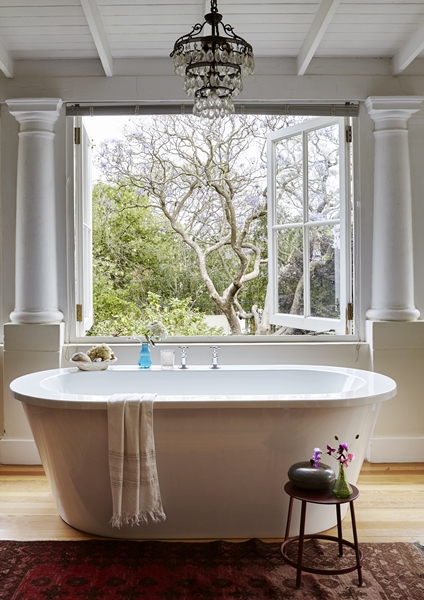 The balcony was converted into an open-plan bath area with a leafy outlook.
Image: Greg Cox/bureaux.co.za

The rooms are resolutely un-fakeable. The cliché about everything having a story behind it is actually true here.

The kitchen island, for example, is a repurposed drawing office filing cabinet bought when a mining house closed their head office. "They said we could have it for R150, provided we collected it," says Mariette - from the 10th floor of a downtown Joburg building with a lift that was too small.

Then there's a trunk they lugged from Folkstone to Dover in the UK, when it wouldn't fit in the bus.

But the beauty of this home is not just in the quirky stories. The aesthetic consciousness - Mariette's eye for colour combinations and design details - creates unity. It's achieved through constant combination and recombination, the subtly shifting, adapting, evolving arrangements that cast the old in new light and synthesize recent additions with existing items.

On the walls, works by some of SA's most sought-after contemporary artists hang among pictures by the Theron girls when they were children, as well as young and unknown artists. 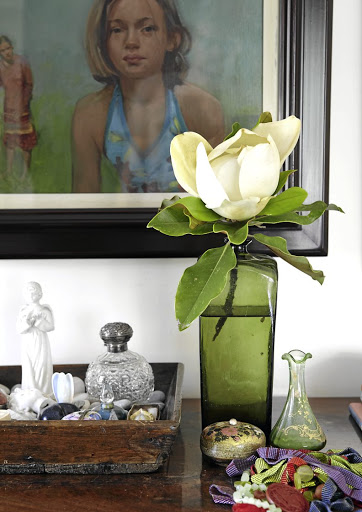 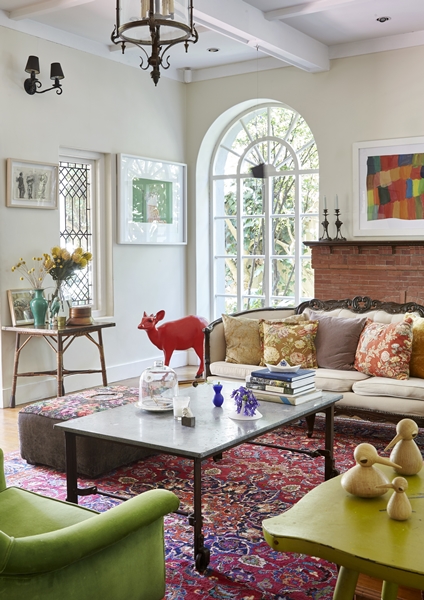 With Pascale in Eindhoven, Peter and Mariette have discovered contemporary Dutch design. "We love Holland because of its quirkiness," says Mariette. "They don't take things too seriously." Of course, they do take things seriously, but have a lightness of touch that seems to obscure all effort - as it is in the Theron household.

So, while their house is anything but minimalist, it seems uncluttered - another way of saying things seem to have found their place in thoughtful ways. They've been combined for harmony and balance, more important than minimalism or maximalism, or anything in between.

Of course, that doesn't mean that they won't be moved again tomorrow. Because a really creative eye will find countless new combinations, new compositions and harmonies. It's what Mariette means by: "It's moving but it's not."

That's the difference between a house that's decorated and one that's lived in aesthetically. - bureaux.co.za

This Cape Town pad is a master class in curating collections

Thanks to a clever renovation, this compact Killarney apartment now feels larger than life
Lifestyle
4 years ago