Hidden behind the heritage facade of this Bo-Kaap home are a series of sleek, contemporary spaces filled with designer furnishings The sunken lounge is filled with an eclectic mix of some of Craig’s favourite design pieces he has collected over the years.
Image: Greg Cox/bureaux.co.za

It took Craig and Christian Tabor-Raeside three attempts to find the perfect colour for their newly renovated home. This is a unique challenge for the residents of
Bo-Kaap: the 170-year-old former "Malay quarter" is renowned for its rows of multi-hued cottages.

They settled on "Marsala" (Pantone's Colour of the Year for 2015), but beyond the earthy-toned exterior, the three-storey house is pure monochromatic sophistication - dominated by the lush green wall that provides an unexpected outlook over two levels. 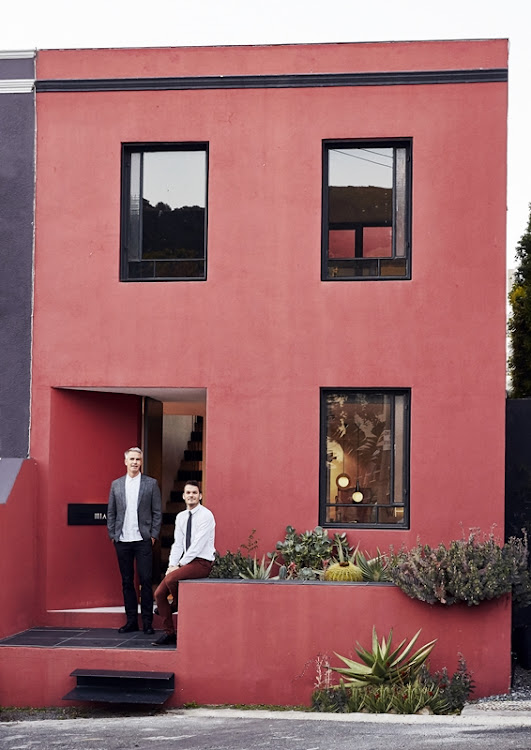 In keeping with the heritage of the area the homeowner retained the façade of the semi-detached cottage, but custom-made steel windows with brass glass inlays give it a signature look that differs from the other 'Malay' cottages that line the Bo-Kaap cul-de-sac.
Image: Greg Cox/bureaux.co.za

Craig bought the cottage over a decade ago while living in London. When he returned to South Africa, his "investment property" turned out to be the ideal space to put down roots and flex his design muscle. He called on friend and architect Chris van Niekerk of The Fold Architects to bring his vision to life.

"When I looked at my site diagram I realised that what looked like a council servitude was actually part of my property.
I fell in love with the idea of using it to build a vertical garden," says Craig.

Another discovery - revealed when the original roof needed repairing - was
the potential views of Signal Hill, so Craig added a rooftop space to his wish list. The rest of his brief was open.

"We have similar taste, so I gave Chris free rein to do what he wanted with the design," says Craig.

Chris took on the challenge to create an optical illusion. "Craig wanted a lot of light and a sense of spaciousness that would belie its actual size," says Chris. Opening up the south-facing wall of the house and installing light-friendly steel-framed windows ticked both boxes.

"The windows also allow the garden to be visible from every space in the house," says Chris. A roof-light and a slatted floor on the second level was a simple solution to spread natural light across both floors.

It is this shower of light, and the vertical garden, that greet you on entering the home. The ground floor is one airy space of kitchen, then dining room and, finally, a gently sunken lounge. It is a simple yet homely space that has surprising details softening the rudimentary materials. The kitchen island and columns are fashioned from off-shutter concrete, of which the texture was made to match the grain of the spruce used for the cupboards. 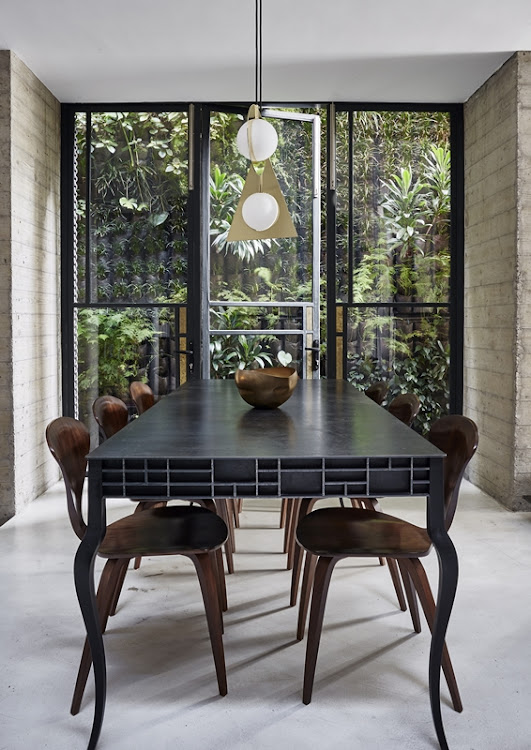 The ceiling-height steel windows with brass glass inlays were designed by the architect Chris and break what could be an otherwise austere look.
Image: Greg Cox/bureaux.co.za 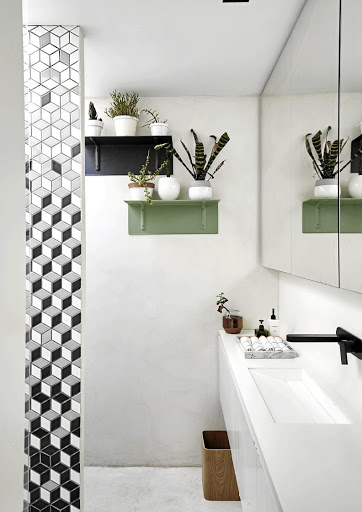 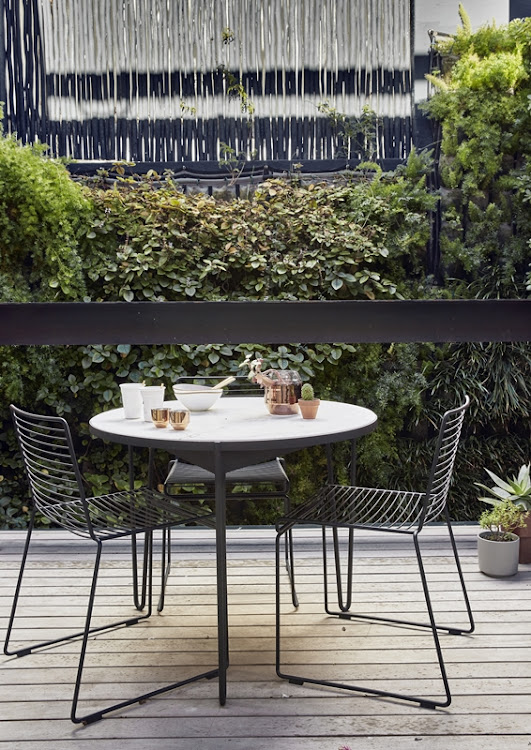 The courtyard can be found on a landing at the top of the stairs and makes full use of the vertical garden.
Image: Greg Cox/bureaux.co.za 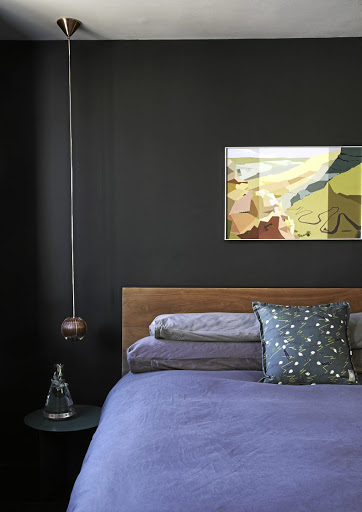 The black steel windows, designed by Chris, have glass inlays with bronze glass introducing a touch of glamour. "It was a simple way to use a precious material like brass in a way that imbues a sense of poetry to an otherwise functional element. The inspiration came from wanting to elevate this item out of its usual utilitarian function," he says.

Apart from the vertical garden, the dominating feature of the open-plan kitchen/lounge first floor is the black steel stairs that take you to the second floor. "They are really one-of-a-kind," says Craig. "It took about six months to get them right as each stair had to be bent by hand to ensure they were at the right angle. I love the way the steel cords on the side of the stairs go all the way up to the roof floor." 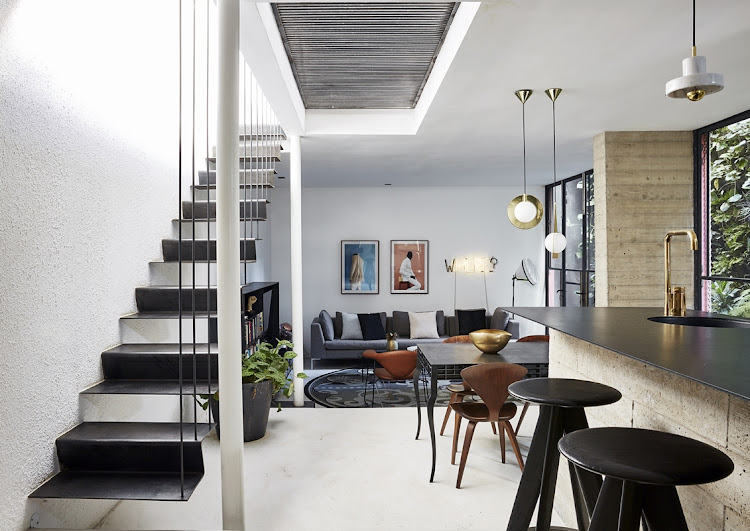 Vast windows and a slatted wood 'roof' floor ensured that the cottage took on a new light-filled version of itself. 'We chose to keep the floors and walls white on the ground floor to maximise the light,' says Craig.
Image: Greg Cox/bureaux.co.za

While the living space on the ground floor is filled with pieces from Hay, Tom Dixon and other iconic designers (Craig's company Créma Design imports pieces to South Africa, many of which have become permanent fixtures in his home), the second floor has two bedrooms, a bathroom and an open landing creating a surprising mid-air courtyard.

"It's great to have an outside space on the bedroom level. We spend mornings there drinking coffee and reading the newspaper. It also connects the guest bedroom with the main bedroom, which makes it more social," says Craig. 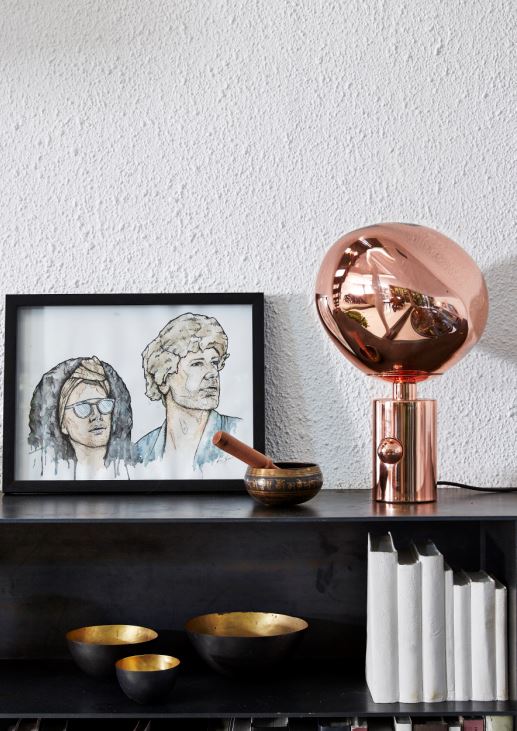 An illustrated image of Craig and Christian, a Copper Melt table lamp by Tom Dixon, porcelain 'books' and a textured wall catch light coming down from skylight.
Image: Greg Cox/bureaux.co.za 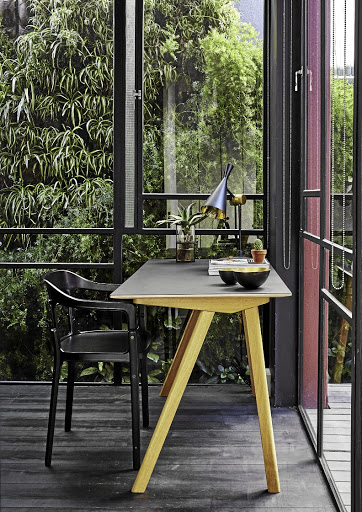 Because the cottage behind the heritage faςade of the house required extensive work, Chris had freedom to play with the internal spaces - and this was done to ensure as much natural light as possible was let in. Using dry walls on the second floor also allowed them to position the rooms to maximise light flow without being restricted by supporting wall requirements. 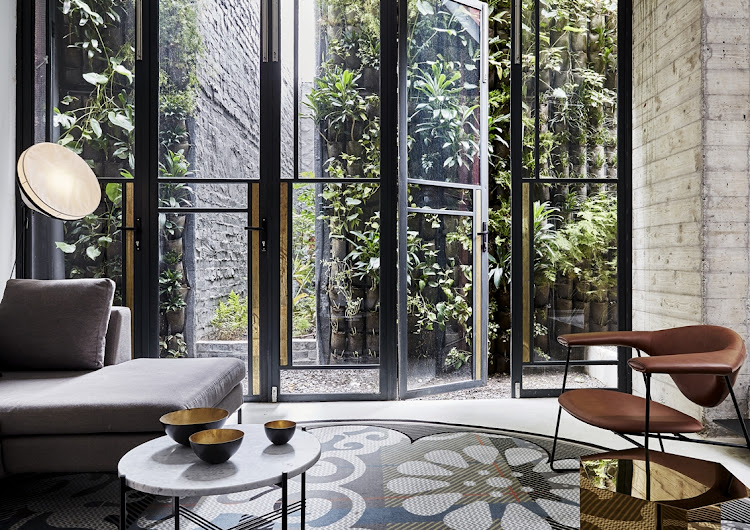 'Creating different levels on the ground floor really made a difference. When you step down into the lounge you really get a sense of spaciousness,' says Craig.
Image: Greg Cox/bureaux.co.za

Craig loves the play of light throughout. "Because the second floor is so light, we were able to choose very dark paint for the walls and colour the floors black. (The vampish green is Plascon sushi wrap.) When you climb the stairs to this floor it feels like you are entering a special place."

The organic colours and black floor work well with the leafy wall that gives the house a charming "garden in the air" feature. It's a beautiful secret that one wouldn't guess rests behind the walls of a cottage tucked away on a hill overlooking the city.

This cottage is one of Cape Town's Arts & Crafts gems

This treasure from a bygone era in Green Point, Cape Town, is a sanctuary surrounded by apartment buildings
Lifestyle
4 years ago

This chic bush home will seduce you with its endless views

INSIDE LOOK | This Cape Town home is down to earth, but high on style