Nic Bladen shines a spotlight on the threat of global warming by casting unique botanicals into bronze, creating artworks he hopes will last as fossils of the future 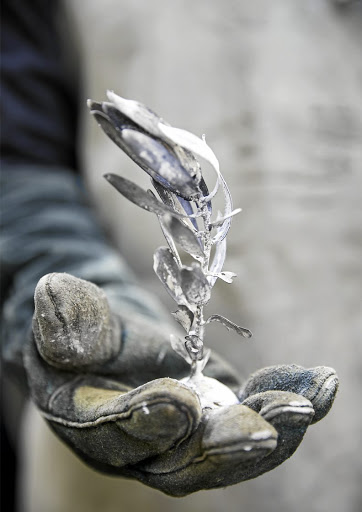 "Somehow the orchid fraternity got hold of me." It sounds like a plot twist in a floral conspiracy novel, but this was perhaps the turning point in sculptor Nic Bladen's career.

From making a living creating jewellery (which admittedly was very well received), Bladen was asked by the president of the local orchid society if he would cast a few whole orchids in bronze.

A former dental technician, Bladen had learned about bronze sculpture under the watchful eye of Otto du Plessis at Bronze Age before going on his own. He'd been struggling along when the orchid request came.

"I cast a flower one day and that was it. Light-bulb moment. I'm casting at 0.3mm, but I am also casting tree stumps. It's a marriage of the disciplines."

The orchid job successfully executed, the penny dropped about how beautiful organic matter casting can be and Bladen embarked on a botanical path that has taken him to where he is today, exhibiting in the Everard Read Gallery in both London and across South Africa and with a workshop in a heritage building in Simon's Town.

Simon's Town, along the Cape Peninsula's southern side is a quaint little coastal village in that at street level its architecture, fish 'n chip shops and pubs are more reminiscent of Cornwall than of anything South African. The similarities end where the town hits the mountain slopes it is built on.

Surrounded by the Cape Fold mountains, the area is covered in indigenous flora from proteas to buchu and thousands of other species, some common, many rare; this is Bladen's foraging ground. 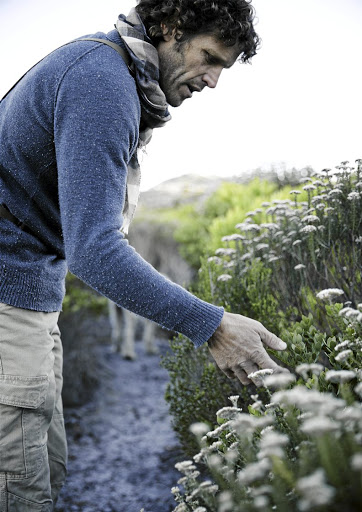 Nic Bladen collects plant matter in the Baskloof Fynbos Reserve situated over the mountain from his studio on the coastal belt above Scarborough.
Image: Warren Heath/Bureaux 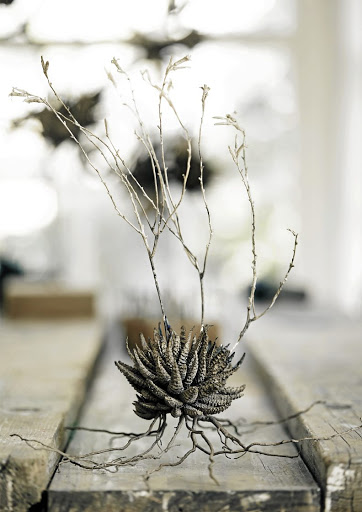 His process is relatively simple in concept, but difficult to get right.

"I go for a walk, find a plant or get some cuttings, legally, and then it starts with some very simple jewellery moulding practices. In normal jewellery this would be a wax form, something you carved yourself or did in a mould. Sometimes it doesn't work. Things that get in the way include ego and over-confidence. Whenever you think things are going well, a bus hits you. Sometimes a mould cracks, or I get a hole in the mould and once you pour in the metal it falls through the hole and that's wasted, so it's just about being mindful of each and every task you undertake. Go slow and do every single move correctly. If you are not there, you have to do it over.

"I think there are 361 protea species in Southern Africa. I'm planning to build a mobile studio. All my tools fit into my trailer and I can pull it into any landscape and pull out my drawer, there's my oven, there are my vacuum tables and on the other side is a Bunsen burner, and the equipment I need for the foundation work. Then I have a mould. Collectively all I need can fit into a box. I hit the road with all my stuff, Bruhno [the Spinone Italiano] in tow."

Conrad Hicks has forged a great career as a sculptor

Striking while the iron is hot would be a fitting strapline to Conrad Hicks' life. As a master blacksmith he has been beating the shape out of metal ...
Lifestyle
4 years ago

Many of the plants Bladen is casting are endangered, and despite the fact that he is trying to shine a light on their status and the threat of global warming, he also does not want to be accused of collecting plants illegally.

"I found my first plant growing in the middle of a path where people mountain bike. It didn't stand a chance so it was coming with me. I don't just stop and pick stuff on the side of the road, because it's illegal. If somebody asks me about where the plants come from, I can say, 'This came from a privately owned piece of land up near Scarborough where I have permission to harvest. Here's a photo with the GPS co-ordinates if you would like to see, here's my letter and there's the sticker on my car when I park.'"

The big idea is to hitch his trailer, go up to East Africa and cast the flowering proteas of Uganda and then drive south, capturing all of the proteas he can along the way from the eastern escarpment back down to South Africa's Limpopo province where there are lots of proteas.

With fire, earth, water and air, Kashief Booley, the blacksmith of Prince Albert puts the artisan back into that over-used adjective, artisanal
Lifestyle
4 years ago

"Eventually, one day you can have a museum of proteas to be able to say, 'this is what they looked like'. They won't be much scientific value to the world because there won't be any DNA to work with, but we've got the shapes of proteas that are dying because of global warming, that won't grow again. Same for orchids. There are over 300 species in the Cape alone. I'd like to capture that, have them as a collection, construct a building, the Cape Orchid Museum with another wing for the Natal Orchids. We've got 6,000 plant species in the Cape alone to play with. I've maybe covered 400 thus far. That's taken 12 years. I'm 43 now, so I've got what. 30 years to go?

"These plants might not be here in 200 years' time. There was an amazing photo of a house where everything was burnt to cinders. The only thing left in the house was a bronze sculpture. That's what could happen with these plants. I'm making metal fossils."

Music and dance are as much part of Cape Town artist Beezy Bailey's work as colour, form and line
Lifestyle
4 years ago

The opening of the striking Norval Foundation museum in Cape Town has added yet another cultural landmark to the art-rich city, writes Andrea Nagel
Lifestyle
4 years ago