With whole façades that slide open to the pool area, this contemporary house in tropical Mozambique truly blurs the lines between indoors and out 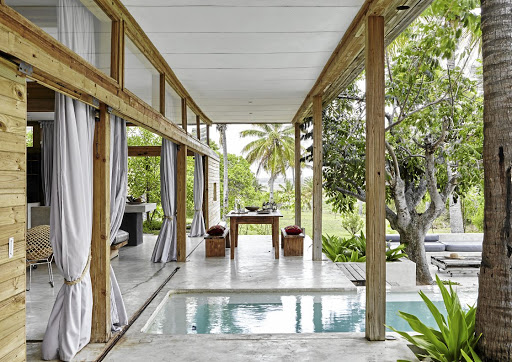 When planning their dream home, the owners wanted to be able to roll out of bed and into the pool, which is why it's central to the house's layout.
Image: GREG COX/ BUREAUX

Casper van der Merwe and Hein Visser had been living in the popular tourist town of Tofo, in Mozambique's Inhambane Province, for eight years, where they ran a guest house and restaurant. But the pair grew tired of the party lifestyle and wanted a little respite; a quiet oasis from the hustle and bustle.

So they searched the surrounding area and found a property perched on a dune and fringed by a lush mangrove forest, which put just enough space between them and the cosmopolitan town and popular beach.

"It is a dream that became a reality," says Casper. "We spent a long time envisioning what we wanted the house to look like and about the spaces we needed to live." They imagined an elegant, clean-lined house where everything could open up. "With such a superb climate, you want to make the most of the outdoors," says Hein.

"We imagined being able to fall out of bed and into the pool or taking a bath outside." Casper adds: "Unlike the crammed, air-conditioned, low-ceiling concrete houses that we had been renting, we wanted to create an open space that gives you the feeling of being outdoors even when you are indoors." 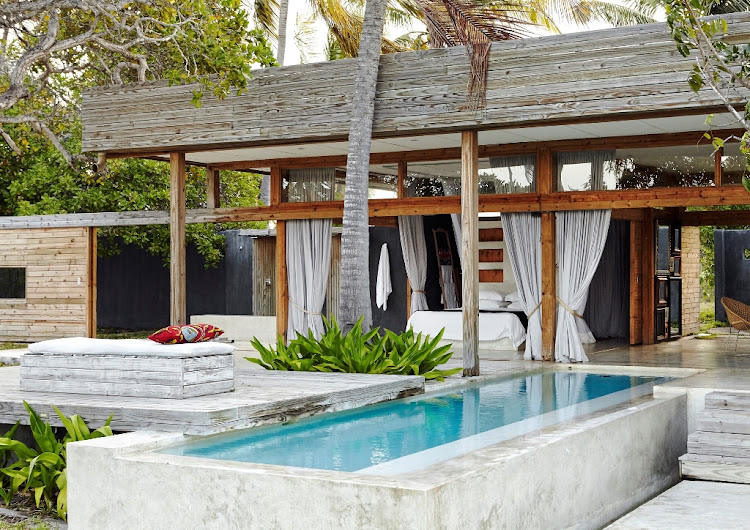 Open plan takes on a whole new dimension in this home where whole façades slide open to create a seamless extension of the indoors to the outside.
Image: GREG COX/ BUREAUX 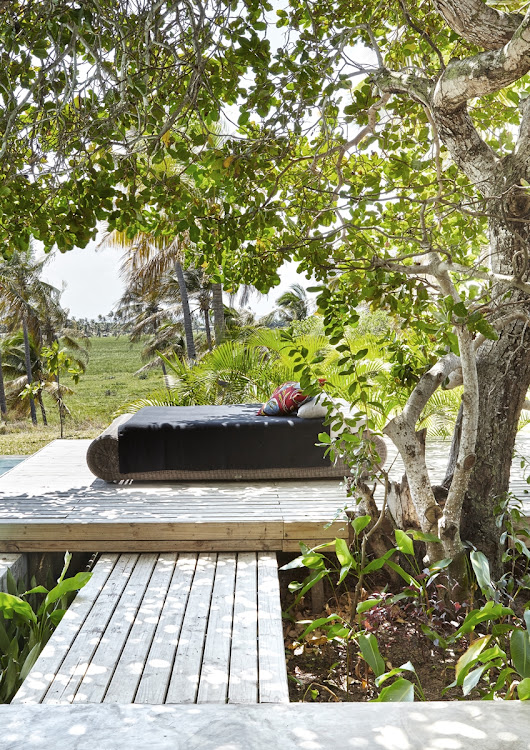 The deck with daybed invites poolside lounging with a good book and a cocktail in hand.
Image: GREG COX/ BUREAUX 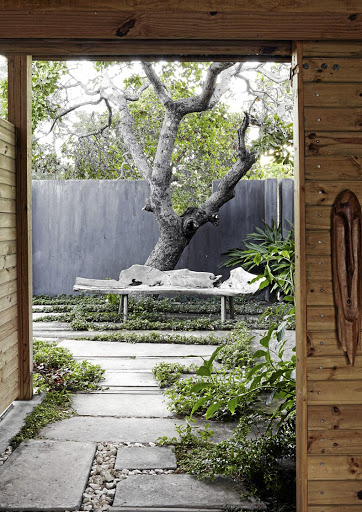 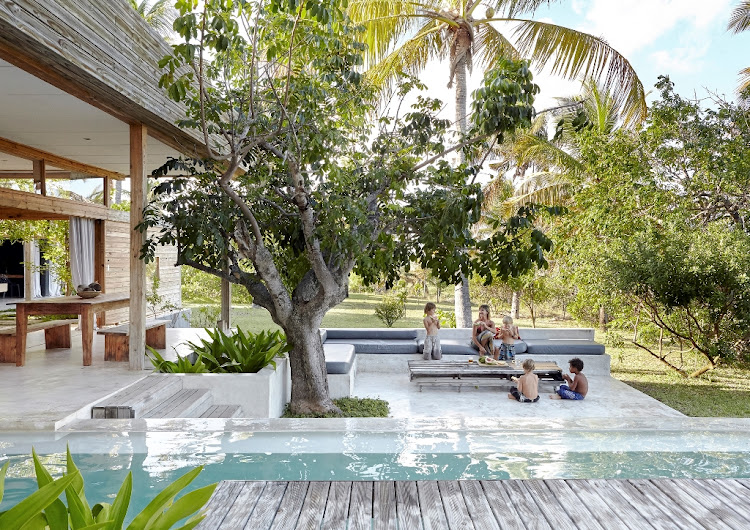 Casper counts proponents of Modernism such as Le Corbusier, Mies van der Rohe and Carlo Scarpa as inspiration. "The architecture in Inhambane is incredibly beautiful," he says. "It is all old concrete Art Deco and Modernist buildings; I love their simple lines."

The plan of the house is straightforward: A long rectangle of brick and wooden columns frees up the walls to become wooden sliding doors that give a new meaning to open-plan. It allows for an internal flexibility and spatial freedom - an important aspect of the design for the couple. Timber sliding doors, reminiscent of the Japanese shoji screens that act as doors, windows and room dividers all-in-one, allow whole facades of the house to be opened up.

This is also a natural way to control the building's climate. "The doors are almost never closed. Depending on the prevailing wind or rain, you just close the exposed side," says Hein. A 600mm clerestory window running below the roofline creates the impression that the roof is floating above columns and walls, allowing natural light in. 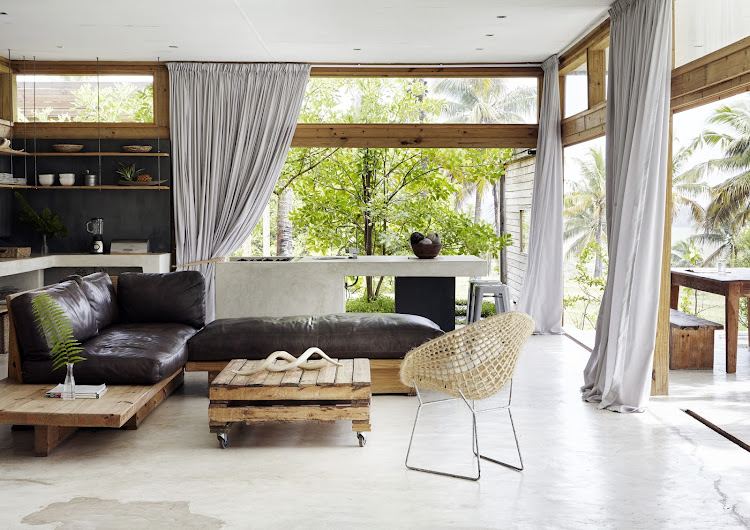 The main house consists of an open living, dining and kitchen area with a master suite that opens-up onto a private courtyard. Two additional suites are separate from the main house.
Image: GREG COX/ BUREAUX 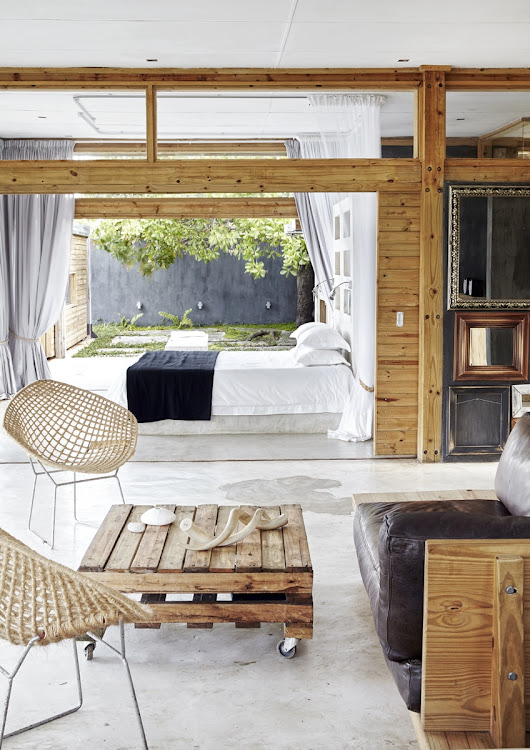 A sliding door divides the master suite from the rest of the house.
Image: GREG COX/BUREAUX 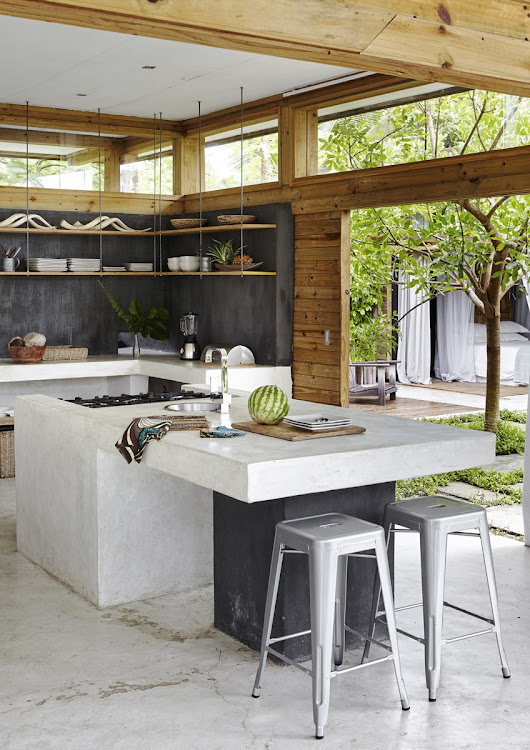 The fittings and finishes in the kitchen have been kept simple and neutral to blend in with the home's tropical surroundings.
Image: GREG COX/ BUREAUX

While the planning phase was effortless, building proved to be more challenging. Because of the area's sandy soil, site preparation was crucial. The footprint of the house was excavated to foundation depth and the soil was replaced with a compacted sand-cement mixture. The footings for the timber columns were then excavated from the stabilised soil. Almost all of the building materials, including fittings, were imported. "We had to truck in everything - taps, basins, lighting, ironmongery," says Hein.

The couple sank a borehole and laid irrigation - a necessity for the warm climate and sandy soil - to cultivate a lawn around the house. They also planted more than 140 trees including cashew (Anacardium occidentale), Flamboyant (Delonix regia), Indian almond (Terminalia catappa) and Pride of India (Lagerstroemia indica). "We plotted the house in such a way as to not sacrifice any of the exiting trees," Casper says. "We wanted the mature trees to form part of the design." 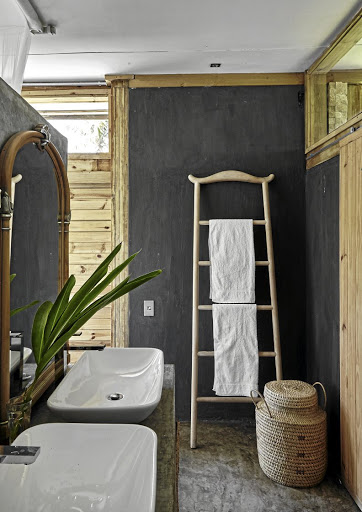 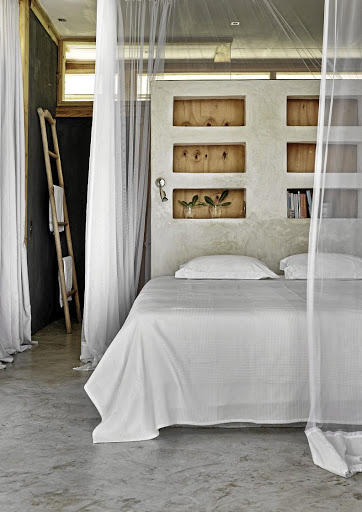 The custom-designed headboard in the master suite is also the dividing wall to the ensuite bathroom.
Image: GREG COX/ BUREAUX 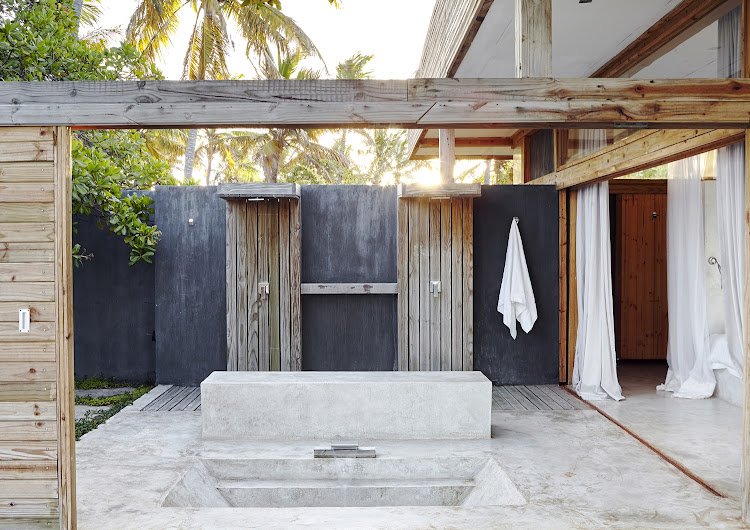 The master suite opens up into a private courtyard with a luxurious spa-like sunken bath and outdoor showers.
Image: GREG COX/BUREAUX

Although not a typical Modernist glass box, the transparency achieved by the openness of the house accomplishes the ideology of Casper's icon Mies van der Rohe when he says: "We should try to bring nature, houses, and human beings together in a higher unity," making for an original house that melds with its surroundings and making its occupants keenly aware of their environment.

Essentially 'three boxes piled on top of one another', the unique design of this contemporary Cape Town house shows a lot of out-the-box thinking
Lifestyle
3 years ago