The home of Geraldine Fenn and Eric Loubser, two of SA’s hottest contemporary jewellery designers, is a bijou gem 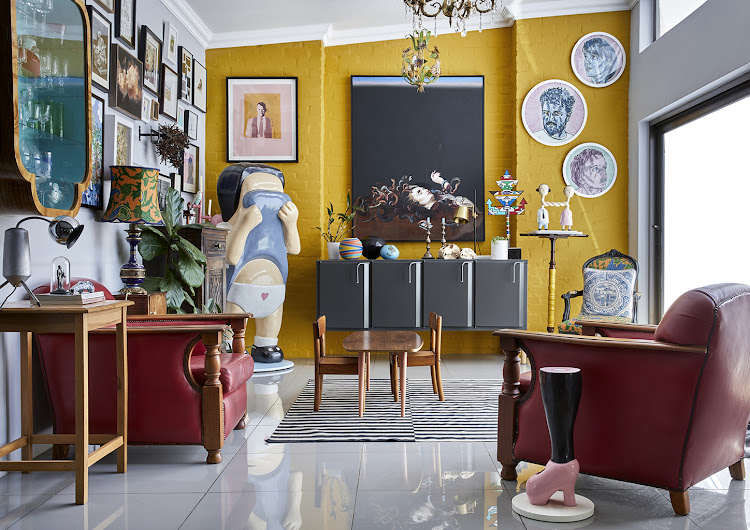 Geraldine Fenn and Eric Loubser's home in the Joburg suburb of Melville, where they live with their two boys, Hugo and Felix, is a little like a treasure chest. Which is appropriate, because they are two of SA's most exciting contemporary jewellery designers.

As people who work with small, intricate designs, it's not surprising that there is a density and level of detail in their home that suggests a sensibility trained to understand the power and significance of objects.

Geraldine and Eric point out two characteristics of jewellery that they feel colour all aspects of their lives. First, says Geraldine, jewellery is surprisingly intimate. It's worn close to the body, it's personal, and people identify strongly with the jewellery they wear. Secondly, "There's always a story involved," says Eric. People give each other jewellery to mark significant occasions, so it usually comes with strong associations. 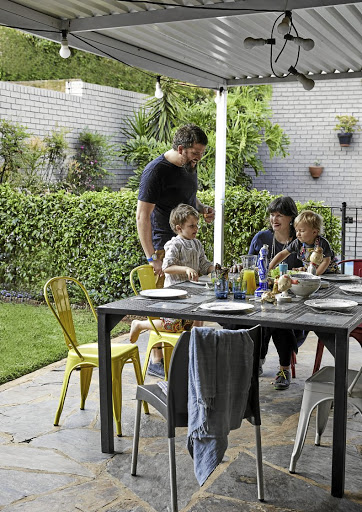 "Jewellery is one of those things that gets passed down," he says. "You connect with people in a sentimental way being a jeweller, especially a jeweller who reworks old pieces. I think we are quite sentimental people."

He doesn't mean sentimental in the sense of being nostalgic or indulging rose-tinted ideas about the past. Rather, it's a sensibility that expresses itself in a curiosity about people's relationships with their personal histories, and a fascination with the artefacts of the past and how they carry meaning in the present.

The couple's house is filled with family heirlooms and stories from the past and present. "We like things that have a story," says Eric. "We don't like getting stuff for the sake of getting stuff."

That doesn't, however, preclude "stuff". Geraldine is quick to point out that she is an avid collector, and she likes to explore her ideas through art and objects. Everywhere around the house, on shelves, walls, mantelpieces and in display cabinets, she's created assemblages or installations that trace ideas "that I play around with", and often inform her jewellery collections.

"I never really start out with a fixed idea of what I want to do," she says. Rather, many of her jewellery designs start with something that catches her eye, combines with something else and starts advancing associations and forming something larger than itself.

The displays she creates mix precious and incidental discoveries, combining kitsch and cute aesthetics: wedding cake figures, thimbles, netsuke, Catholic imagery, skulls, thimbles ... the list goes on. But holding it together is the question of meaningful objects, intimacy and aesthetics, past and present. 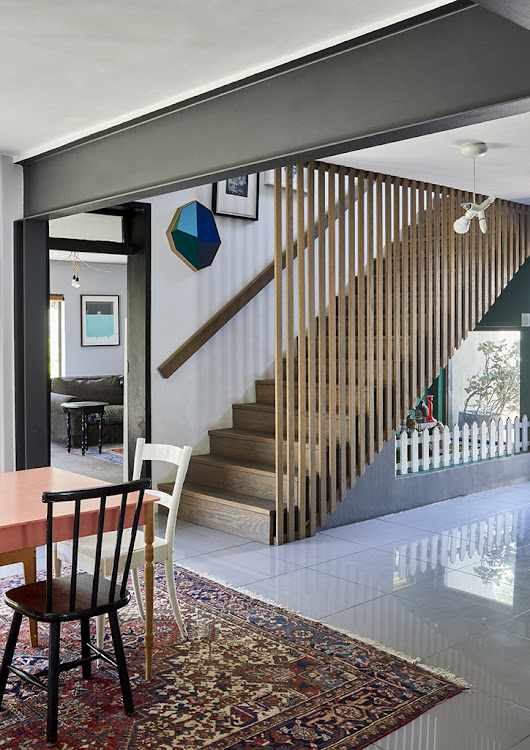 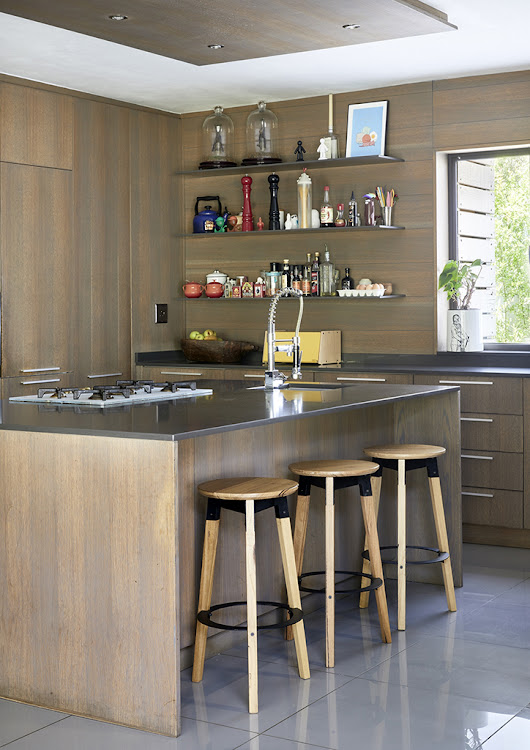 The wood and metal stools in the kitchen are by Pedersen & Lennard.
Image: Greg Cox/Bureaux

Eric's explorations of cute and Eastern aesthetics adds another layer to the range of influences, often in the form of ceramic figures, such as those by friend and collaborator Frank van Reenen, whose "Shy Girl" sculpture tries to hide in a corner of the living room.

Geraldine and Eric have favoured inherited furniture, preferring to modify or update it rather than preserve it in pristine condition. "We are lucky because my parents have a lot of inherited furniture," says Geraldine. "I've got family from France and England, and we've collected antique pieces that have come down through the family."

There are contemporary pieces sprinkled among the vintage pieces and antiques, which tend to be from local designers - the dining table is by Gregor Jenkin and the server by Dokter and Misses. But none of it, it seems, is above a bit of modification. The Jenkin table has had a lick of paint, and chairs from Eric's parents have been upholstered and reupholstered.

Heirlooms are sometimes integrated with furniture. The outdoor dining table on the patio, for example, has been surfaced with a mosaic that incorporates copper etching plates from Geraldine's grandfather.

"My English grandfather did etching," she says. "I inherited all his etching plates. They were packed away, wrapped in paper, so we had this table made, and the etching plates are part of the design. They'll get a bit worn, but now I see them every day." 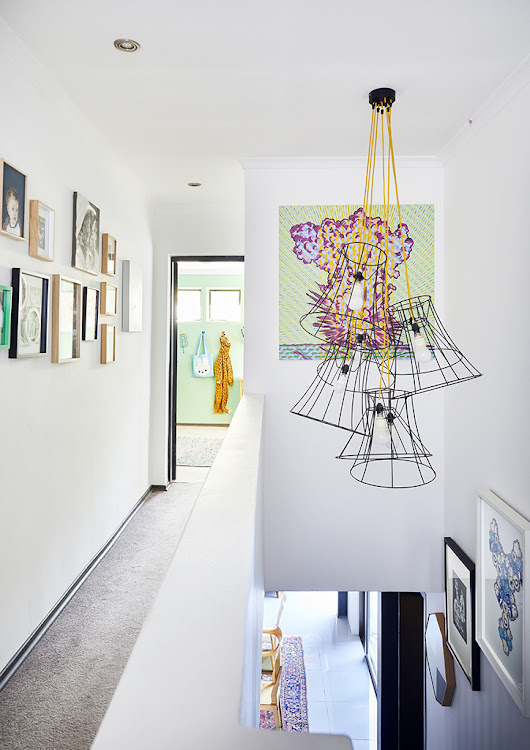 The cluster of Victorian-style wire lampshade frames in the stairwell puts a contemporary spin on traditional aesthetics.
Image: Greg Cox/Bureaux 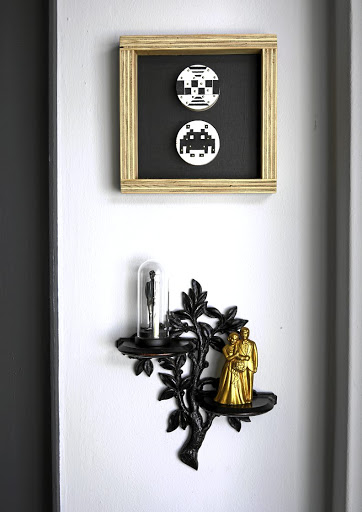 Sentimental objects such as the gold cake topper created for the couple's wedding cake are found throughout the house.
Image: Greg Cox/Bureaux 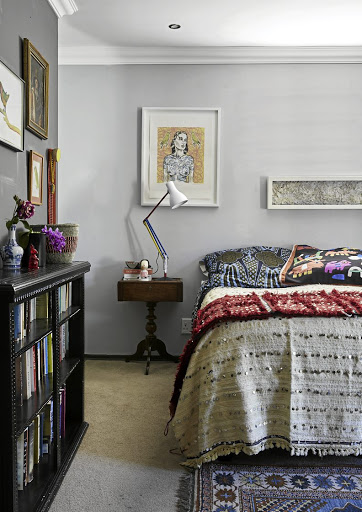 The main bedroom is filled with art and a rich layering of fabrics. Above the bed is an artwork by Gina Waldman.
Image: Greg Cox/Bureaux 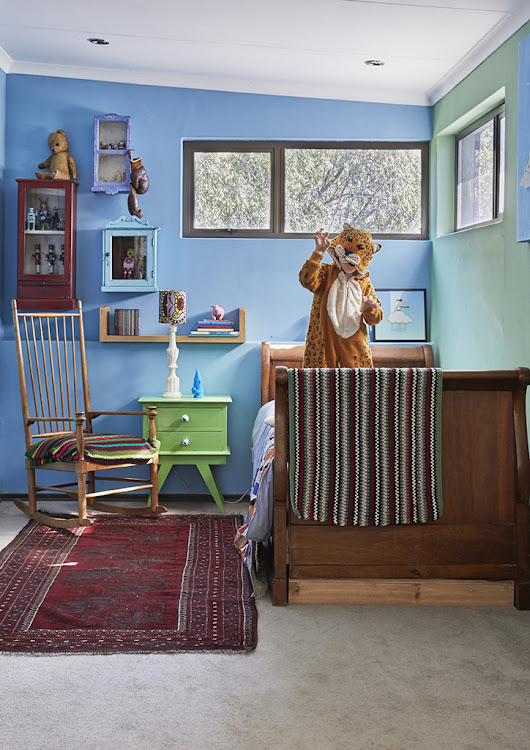 Felix and Hugo’s bedroom is painted in shades of blue and green.
Image: Greg Cox/Bureaux

Other heirlooms have been transformed into artworks. Above the bed in the main bedroom is an intricately pinned assemblage by Gina Waldman. Geraldine commissioned her to create something with lace and gloves she'd inherited. "These are all gloves from my grandmother and great-grandmother - these tiny white leather gloves," says Geraldine.

Past and present collide in other pieces: a Queen Anne-style chair is upholstered in African wax-print fabric and Victorian lamp stands have been topped with lampshades in contemporary African prints.

A lot of the furniture I have inherited is very European and I love those antiques, but it's nice to add a modern African vibe

Sometimes, her and Eric's sentimentality has forced them to engage with the remnants of the past they might have preferred to leave behind. Above the fireplace in the lounge, for example, is an old painting of a seascape that belonged to Eric's grandmother, and no-one else in his family wanted it. "So Eric said he'd take it," says Geraldine. "He felt sentimental about it."

"I know it's ugly," says Eric, "but it's just ugly enough." Geraldine adds: "I want Conrad Botes to paint a mermaid sitting on the rock." 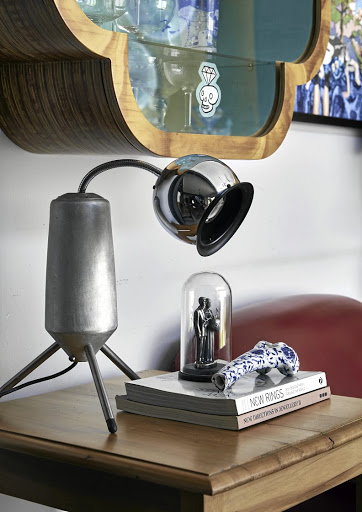 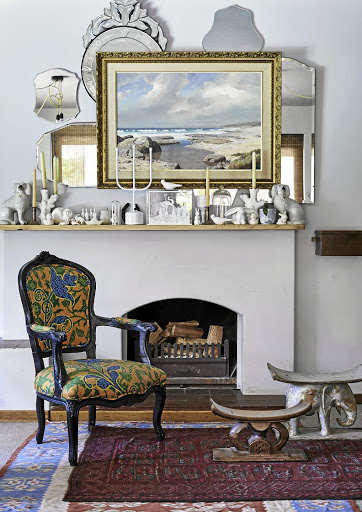 The mantelpiece above the fireplace in the TV room/lounge holds a collection of white ceramics.
Image: Greg Cox/Bureaux

Another feature of the house is the collection of local contemporary art. Geraldine and Eric often collaborate with artists for the exhibitions they hold at their studio, Tinsel, and the pair crossover between art and craft. Geraldine makes jewellery-sized silver sculptures and they often exchange jewellery for artworks with their contemporaries. Eric jokes that artists can't afford their jewellery and they can't afford art but by exchanging their wares, they've found a way to give everyone what they want.

There are works by Wayne Barker, Conrad Botes, Frances Goodman, Frank van Reenen, Brett Murray and more. "It's nice because you remember the story with a lot of them," says Geraldine.

That word again - it's the stories around objects that gives them meaning and significance.

It's inevitable, given who they've befriended, whose work has interested them, and who they've collaborated with over the years, that the art and objects also explore areas of interest similar to Geraldine and Eric's - sentimentality, craft, kitsch, consumerism and cultural artefacts - adding a layer of self-reflexivity to the home as a whole. It seems to think about the way it thinks about itself.

But the overwhelming impression Geraldine and Eric's home imparts is a sense of intimacy. It's a space filled with personal history and moments of significance, memories and ideas. It's a home that's undeniably an extension of their personalities, as a home should be. A real gem.

IN PICTURES | This glamorous Cape Town home was designed to impress

Architect Georg van Gass transformed his outdated ranch-style home into a local icon by inviting in life from the street, park and stream outside
Lifestyle
2 years ago