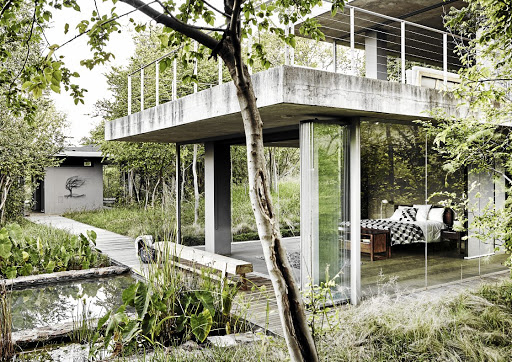 The eco-pool with a natural plant filter is positioned in front of the downstairs guest bedroom, extending the space outwards.
Image: Greg Cox/Bureaux

Less than an hour west of Johannesburg, towards the Magaliesberg mountain range, lies The Cradle of Humankind. About 47,000 hectares here, where humanity's most ancient origins have been uncovered, has been declared a Unesco world heritage site.

Cliff De Wit's parents have retired to the heart of The Cradle on what was once a farm, and is now incorporated within the Khatlhampi Private Reserve, an expanse of wild grassland, natural woodland, dolomite outcrops and bush. "We are able to hear the jackals from the reserve at night," says Cliff. "It feels like you're out in the middle of nowhere."

It's a short drive from a city but a world away - an ideal escape with country roads geared for cyclists, a sculpture park and artists' residency nearby and wildlife from the reserve roaming freely. "We found ourselves visiting every other weekend, and wanted a place of our own here," he says.

One blissful New Year's Eve, he and his wife, Elsje, decided to take the plunge. "A week later we started looking at sites and Cliff's brother Lee started drawing up plans," says Elsje. 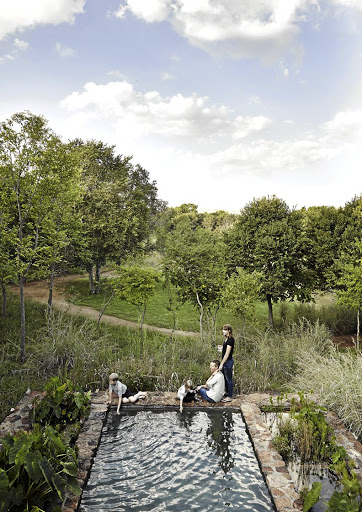 Cliff and Elsje de Wit with their children, Layla and Kayde, around the eco-pool.
Image: Greg Cox/Bureaux

Some years ago, Lee designed and built a pavilion on the farm for Wesley, the youngest of the de Wit sons, using architectural language inspired by Mies van der Rohe and Philip Johnson's mid-century glass houses. It was a stripped-down, transparent, minimalist jewel in the landscape.

Cliff asked Lee to design his family's weekend getaway too, taking his cue from the pavilion. The central idea remained the same: to mediate a relationship with the setting and its natural beauty and to pay homage to the complexity of the site through architecture. And to make a comfortable lock-up-and-go home away from home.

A glass box still seemed to Lee, Cliff and Elsje to be the most subtle and complex response to the landscape.

Building to appreciate the surroundings is not as simple as finding a pretty spot and creating a platform from which to admire it. Tens of thousands of years of human habitation, not least the recent decades of farming, have altered the landscape. A modernist-inspired building would not only acknowledge itself as one among many of layers of human intervention, but also frame the views with that awareness in mind.

The famous glass houses that originally inspired Lee were created primarily in response to a natural setting and through their minimalism aimed to blur the boundaries between inside and outside, building and landscape. 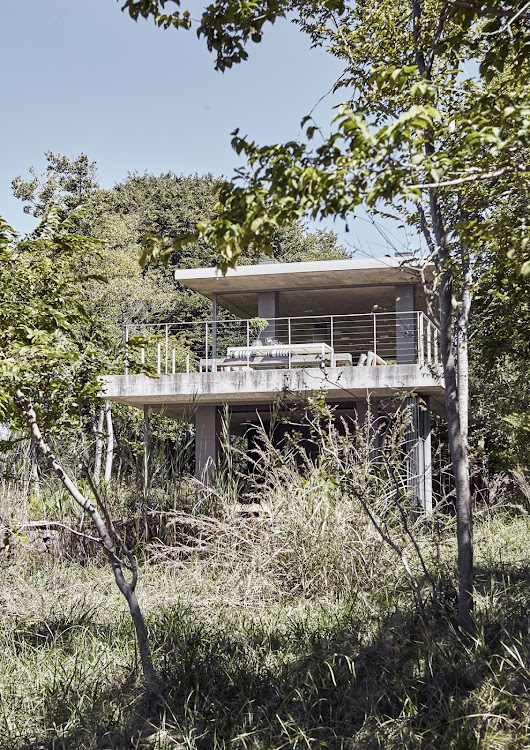 When approached from below, the house is nestled in its surroundings, with vegetation growing right up to it.
Image: Greg Cox/Bureaux 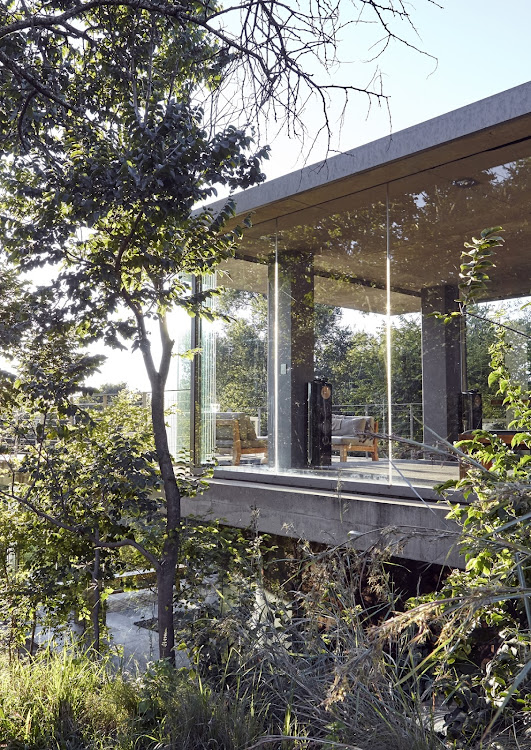 The raw concrete of the slabs and the grey-green colour of the columns echoes the greys and green of the tree trunks.
Image: Greg Cox/Bureaux

A large part of the genius of the design began before a single aspect of the construction took place: its placement. The De Wits searched for a site that would capture views to the Magaliesberg and wouldn't have its outlook marred by other buildings. They wanted it to be private and secluded, yet close enough to Cliff's parents' house for the kids, Cayden and Layla, to visit on foot.

After much driving around seeking potential views, they found a spot against a koppie. "There was actually a substantial scar here from the previous owner's farming activities," says Lee. "It had been used as a loading ramp for cattle." But the koppie was also next to an untouched area of vegetation. "The adjacent wooded area was one of the most pristine areas on the farm. The rocks made it inaccessible for grazing and for tractors. Here you are closest to nature."

Lee figured that if he built on the scar, raising a storey-high platform to create a view to the mountains, they would they be able to rehabilitate the land around the new house, as well as nestle a separate bedroom into the untouched woodland and link it to the main building with a boardwalk.

The building was to impose as little as possible on its site. "We didn't want to make a vast formal space around the building," says Cliff, preferring to bring the landscape up to the building. 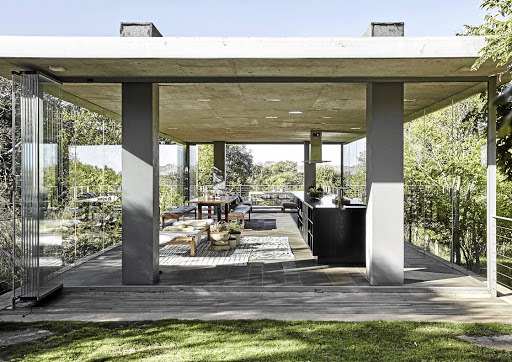 The structure imposes as little as possible on its surroundings.
Image: Greg Cox/Bureaux 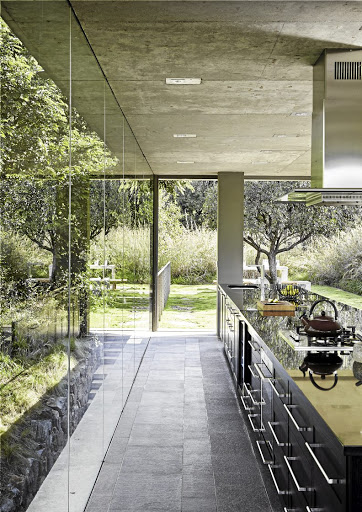 The kitchen island provides a cooking station, as well as a casual seating and bar area.
Image: Greg Cox/Bureaux 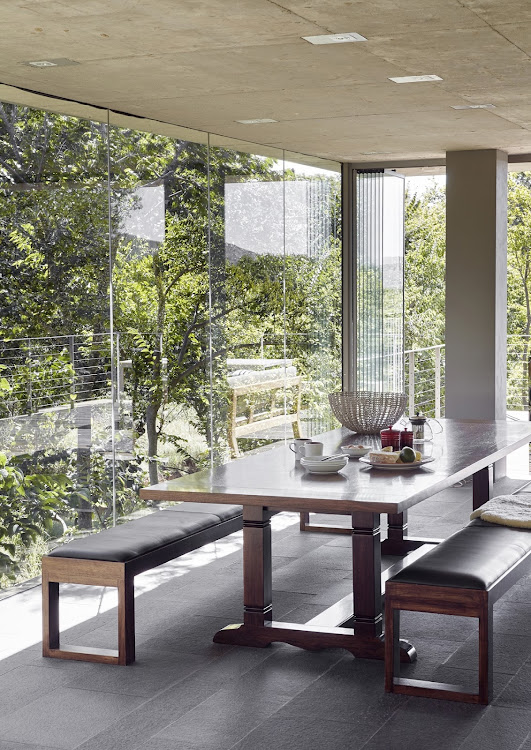 The dining area seems almost as if it is outside, open on one end to the deck when the doors are stacked open.
Image: Greg Cox/Bureaux 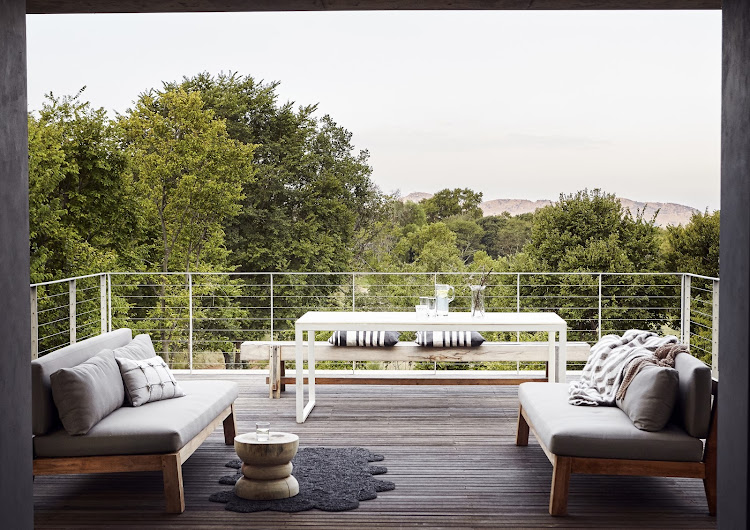 On the mountain-facing end of the top floor, stacking glass doors open on to a deck with a view that looks north towards the Magaliesberg.
Image: Greg Cox/Bureaux

After the site selection, Lee makes the rest sound simple. "We just excavated into the koppie and lifted up the slab."

On top is the living and entertainment area, which has a deck in front, a kitchen island and lounge area. Below are two bedrooms and a bathroom.

To extend the living areas and set the building into dialogue with its setting, almost every indoor area is twinned with an outside area. The downstairs bedroom folds out onto a self-sustaining pool, the main bedroom is mirrored by a deck and the lawn outside the living area creates an outdoor counterpart. 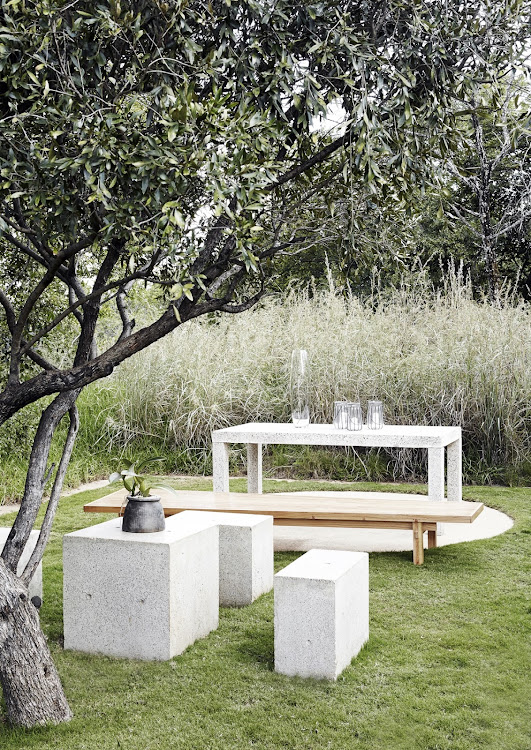 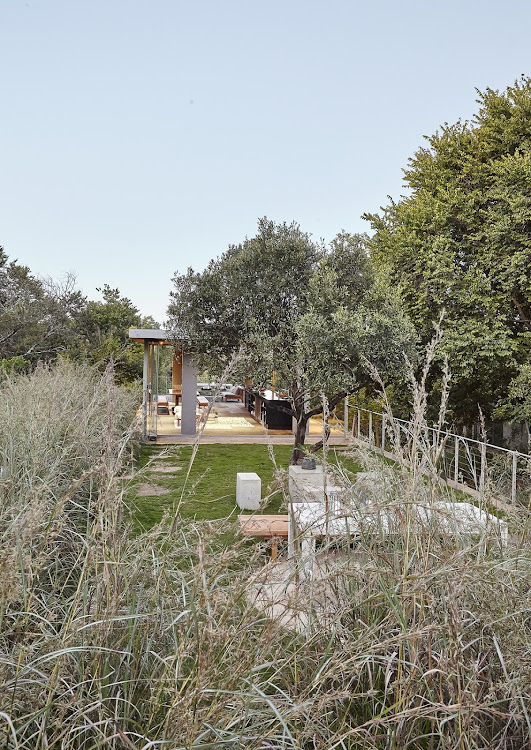 The floor-to-ceiling glass walls along the length of the top entertainment area are almost invisible.
Image: Greg Cox/Bureaux

The De Wits wanted to be economical in their use of materials as well as space, and Lee came up with simple, ingenious solutions. Instead of floating the concrete roof on pillars at the corners of the slab and glazing a "box" inside the perimeter of the roof, he placed four pillars inside, cantilevered the slab and glazed the length of the building at its perimeter. Sliding glass doors at each end allow cooling cross-ventilation.

The natural shading and temperature regulation provided by the trees keeps the interiors from getting too hot. "In winter the leaves drop and sun shines through, providing warmth, in contrast to summer where the trees create a natural curtain keeping the house cool," says Elsje. "We have continued planting indigenous trees to enhance the organic layer of shade the bush provides."

The columns plunge through the floor to the bedrooms and bathroom below, creating pod-like areas. "A solid four-walled room confines the potential for living space," says Lee. There are blinds that screen off the bathroom or bedroom when privacy is required, but when retracted the rooms extend by over a metre again. 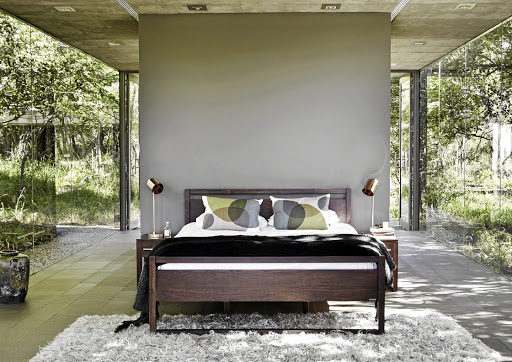 By placing the supporting columns inside in the main bedroom, it was possible to surround it with glass walls on all sides.
Image: Greg Cox/Bureaux 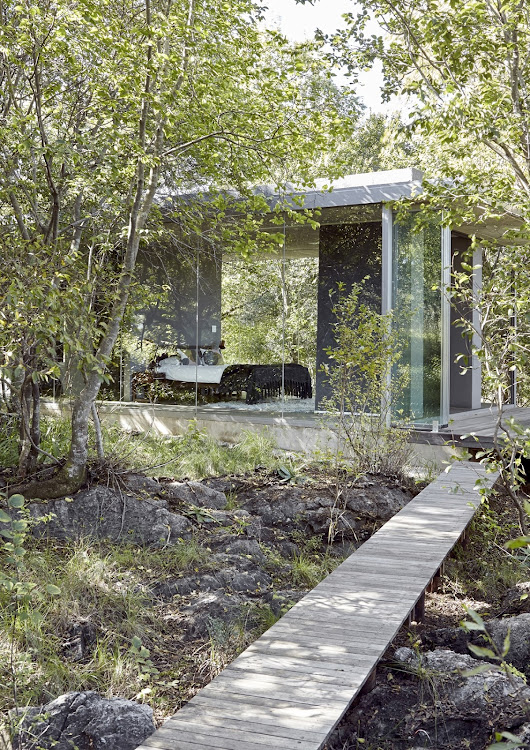 The bedroom seen from a boardwalk that leads over the outcrops of dolomite to an outdoor shower in the forest.
Image: Greg Cox/Bureaux 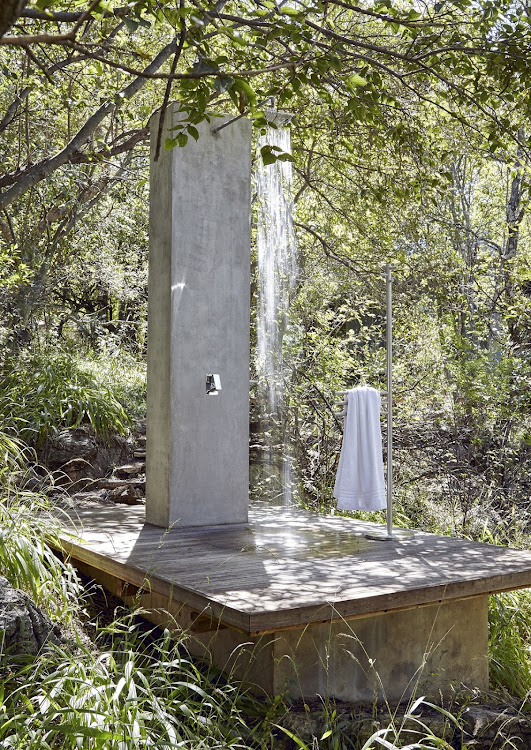 An outdoor shower in the woodland is accessed via a boardwalk from the main bedroom.
Image: Greg Cox/Bureaux 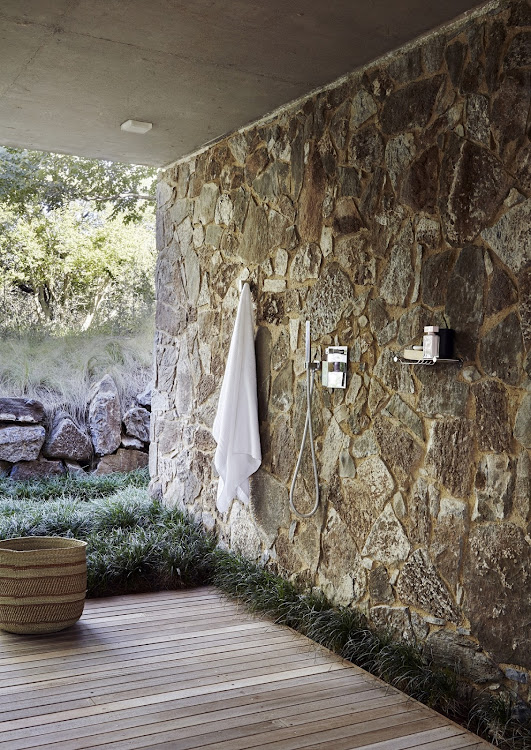 Downstairs, the shower is a semi-outdoor design, open to the dolomite retaining wall down one side of the koppie.
Image: Greg Cox/Bureaux

The bathrooms also have a view, and the shower is semi-open and almost cave-like under the concrete roof. It is sheltered on one side by a dolomite retaining wall against the koppie, and a gap between roof and wall peeps up through the vegetation.

"With a weekend house you can afford to be a little more playful than a house you'd live in every day," says Cliff.

"That's why we separated the bedrooms," he adds.

A natural clearing in the forest provided the space for a separate main bedroom. "Cliff installed lighting in the trees to create texture," says Elsje. "We hardly ever close the blinds at night."

The inhabitants are connected to nature. "You're aware of the sunrise and sunset and get a feeling of the phases of the moon," says Cliff. "You're closer to the seasons and in touch with the elements."

With whole façades that slide open to the pool area, this contemporary house in tropical Mozambique truly blurs the lines between indoors and out
Lifestyle
3 years ago