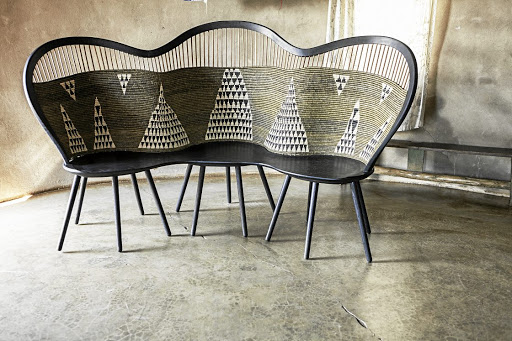 The Hlabisa bench calls to mind the rolling hills of KwaZulu-Natal, and the hospitality of a three-legged pot.
Image: Supplied

Hlabisa's Wikipedia entry is markedly short; just four lines describing the village's location in KwaZulu-Natal. And that's basically it for the area, as far as Internet presence is concerned. There's no mention of the fact that many of the country's master weavers have hailed from this area, nor that Aids has swept through, taking many of its young people with it. Which raises a question: without a new generation to learn, is this where the skills of those master weavers, honed and perfected over centuries, ends?

Make no mistake - these aren't people who have produced one or two pretty what-nots, the likes of which can be bought for a few hundred rands (less, if you're prepared to haggle) at a tourist hotspot. To the contrary; their art is as profound and unique as any of the artists presented at the world's major galleries.

To that point, Beauty Ngxongo - one of Hlabisa's matriarchs - has seen her work displayed at the Smithsonian Institute and the Metropolitan Museum of Art in New York.

Each weaver has developed their own signature pattern, so that their work is deeply rooted in culture, while also contributing to SA's craft tradition - a tradition which should continue to evolve but, without the input of young, new artists, may fail to do so.

If you're into beautiful, hand-crafted homeware, these are the names to know
Lifestyle
3 years ago

This was the concern of Stephen Wilson and Phillip Hollander, the duo behind the award-winning Houtlander furniture brand, when they encountered Ngxongo earlier this year.

The meeting had come about through chance: commissioned to make a unique piece of South African art for the Paris exhibition Revelations, they had joined forces with Mash T. Design Studio to create a bench with a unique silhouette that spoke of the rolling hills of KwaZulu-Natal, while also calling to mind the hospitality and homeliness of a three-legged pot.

The symbolism was evocative, the design on point. All that was missing was a decision on the material that would form the bench's backing, tying it to a sense of place and culture. Various suggestions had been put forward, including cotton and jute, when - in an "aha moment" - the Houtlander and Mash T. Design Studio crews decided that basket weave would be perfect.

The only problem was time - six weeks until the bench had to be delivered, and none of the organisations canvassed were able to help. Then Mash T. Design Studio's Thabiso Mjo suggested a trip to Hlabisa - and everything changed. "Beauty greeted me with an enormous hug and told me that of course she would be able to help," Wilson recalls. 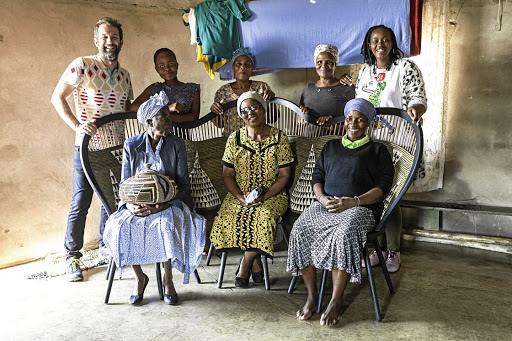 Stephen Wilson of Houtlander with some of the women from Hlabisa, who produced the woven backing of this bench.
Image: Supplied

He was captivated by Hlabisa's story; not only the magnificent aesthetic that had emerged out of this remote and isolated community, but also the micro-economy that had been sparked by the basket-weaving industry, with all weaving materials planted and harvested by community members, and dyes made from substances readily available on their farms.

"These women have found a way to make a living in a very patriarchal society," says Wilson. "It's a sharing economy so the women learn from each other and pass on new skills, with the result that a particular patterning becomes bound to a specific community."

It took a team of six women, working 1, 350 hours, to create the backing for the bench, with two women working on each stitch

His enchantment grew as Ngxongo brought Houtlander's vision to life. It took a team of six women, working 1, 350 hours, to create the backing for the bench, with two women working on each stitch.

The end result is far from technically perfect: Ngxongo had to leave for a conference halfway through the process, and handed over to fellow weaver Ma Ntuli. Unwell and unfamiliar with the design, it was inevitable that Ma Ntuli's input failed to replicate Nxgongo's precisely. At the same time, the stitches made by the apprentices involved lacked the fineness of the masters - and yet, this contributes to the overall charm of the piece.

"The women were nervous when we collected the bench. They had worked on plenty of items, but never furniture. It was out of their comfort zone and they weren't sure how we'd react."

Ultimately, however, Wilson felt the joint efforts of the women and the designers, so rooted in their urban environment, had culminated in something beautiful. "We see this bench not as an end in itself, but as a beginning. The piece is a real juncture. What started out as a collaboration between Houtlander and Mash T. Design Studio went on to blend craft with design, technology with tradition."

The Houtlander team was sufficiently impressed not only to name their bench after the home of the master weavers who completed it, but also to propose a further alliance. But, rather than working on another piece together, Houtlander is joining forces with the weavers to teach new technology and design techniques so that this ancient craft can take its next step forward.

"Craft is the new luxury," says Wilson. "We spend all day staring at our screens, so that when we come across something tactile and handmade, we're intrigued. But, at the same time, craft in SA has become kitsch and commoditised. We want to bring design back to craft; to access the depth of understanding that has been instilled over years and therefore cannot be easily replicated. It's about preventing the stagnation of craft; taking this magnificent tradition and making it new again. And that's what's going to ensure its sustainability."

Something of an anomaly in the craft industry, Ardmore has elevated itself to luxury status on the design landscape locally and internationally.
Lifestyle
2 years ago

We've dreamt up a well-designed, sophisticated living space for the eligible bachelor. Check it out at Design Joburg this weekend
Lifestyle
2 years ago

80 years on, the humble pedal bin from Vipp is still a design icon

Even those of you questioning the sentiment that a bin could yield a "cult" following would recognise the Vipp pedal bin at a glance.
Lifestyle
2 years ago