WATCH | Inside the R92m 'Gatsby' mansion in Houghton 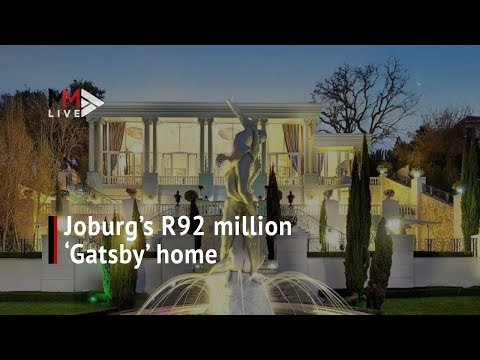 Heart and soul. That’s what it took to build a jaw-dropping 2,000-square-metre home tucked in Houghton Ridge, Johannesburg.

The owners have never lived in the home, but functions were held there by their business associates.

The property went up for sale after the project overtook the owners. They are now looking to buy a smaller property in SA.

“Imagine saying to client I’m going to be with you for eight to 10 years?

“I really think it was a labour of love and passion. As this project grew, it was realised it was bigger than the parties involved. The brief was to complete it,” designer and developer Stephen Pellerade said.

The entrance is surrounded by tall walls and a gate that opens inward.

Making your way along the driveway, tall trees, fountains and statues stand out.

The staircase in the foyer leads to en suite bedrooms, of which there are eight.

There is also state-of-the art security and surveillance systems. iPads are fitted to the walls, which puts switching off lights or playing music a touch of a button away.

Each of the rooms overlooks the living space and the indoor pool and bar.

The home is fitted with solid marble balustrades from Turkey. The glass stretch in the living area gives you a view of the Johannesburg skyline.

The sellers are also throwing a Rolls-Royce into the sale.

It took trips around the world for Pellerade and his team to gather the “most wonderful furnishing and fittings”.

They bought chandeliers from Venice and statues at auctions in France.

“The end goal was to make it an extraordinary home.”

Pellerade said he got involved in the project about 12 years ago. He said they filled the different levels of terrace with soil from the City of Johannesburg when the Gautrain company removed it from Rosebank.

“It really started fairly small and, as we realised how this project could be and this property could be, it became a lot bigger.

“Then you realised you were custodians of an incredible location and incredible project,” Pellerade told TimesLIVE.

He said the owners were amazed when they saw the completed project.

According to Samuel Seeff, chairperson of Seeff Property Group, two to three years ago no price was too high for upper-end buyers, but that had changed.

“Luxury buyers remain cautious, given that property is generally a 20-year investment, and want to see visible and significant change in the economy and political situation before committing.

“Thus far, the economy and record-low confidence levels have given these buyers little encouragement,” Seeff said.

He said there had been a notable decline in high-end sales and prices.

According to Seeff, activity has “practically halved” on the Atlantic seaboard compared with 2016, with the highest price achieved barely reaching R60m, compared with R290m three years ago.

However, Chas Everitt Luxury Portfolio CEO Rory O'Hagan disagreed, saying the luxury market in the country was now in recovery after a decline in late 2018 and early 2019.

“Sales in this sector are on the increase for three reasons, the first being that sellers have now largely come to terms with the fact that it is still a buyer’s market and adjusted their asking prices accordingly.”

O’Hagan said there had been increased interest in SA property among many high net-worth individuals from other parts of Africa, India and China, which have the fastest-growing numbers of millionaires.

He said luxury leisure properties in Cape Town, the Winelands, on the Garden Route and on the north coast of KwaZulu-Natal offered good value in global terms, and especially for those buying with dollars, pounds or euros.

Seeff said a combination of political noise, landownership concerns and record-low confidence had played a huge role in the market.

“Foreign ownership has slowed drastically due to concerns about political stability and the weak economic environment.

“Foreigners want to know that they are investing in a sound property market, where property rights are protected and their investment will accumulate value.”

There had also been a decline in demand for rental investments due to Airbnb, he said..

“There is a global slowdown in the demand for second homes, as wealthy buyers are opting to use Airbnb to rent luxury holiday apartments and villas, and then don’t have to be burdened by the financial and upkeep responsibility of a second home.”