On KolKol farm in the mountains outside Cape Town, Rudi and Karen Oosthuyse have built a modern cabin that combines smart design with meticulous attention to detail 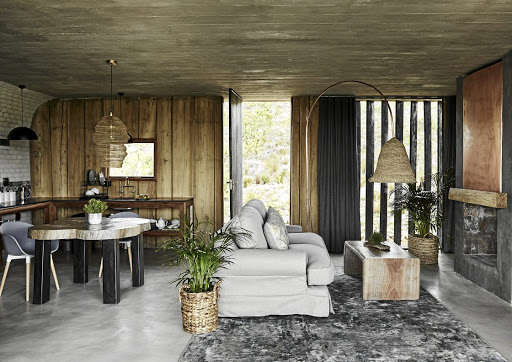 The living area of the KolKol pod is orientated around the large central fireplace, which features a sleek copper-clad chimney.
Image: Warren Heath/Bureaux

Sometimes, small is beautiful. From the first glimpse of this "pod", recently built on KolKol farm in the Overberg, one's interest is instantly piqued. Its arresting part-linear, part-rounded shape provokes an immediate aesthetic thrill, and once you get up close to the structure, the feeling that you're dealing with something special intensifies.

On one level, this small dwelling is simply a holiday cabin — created and built so that city folk can come to the farm to relax and reconnect with themselves, with nature and with one another. But the pod is a cabin taken very much to the next level in terms of design. 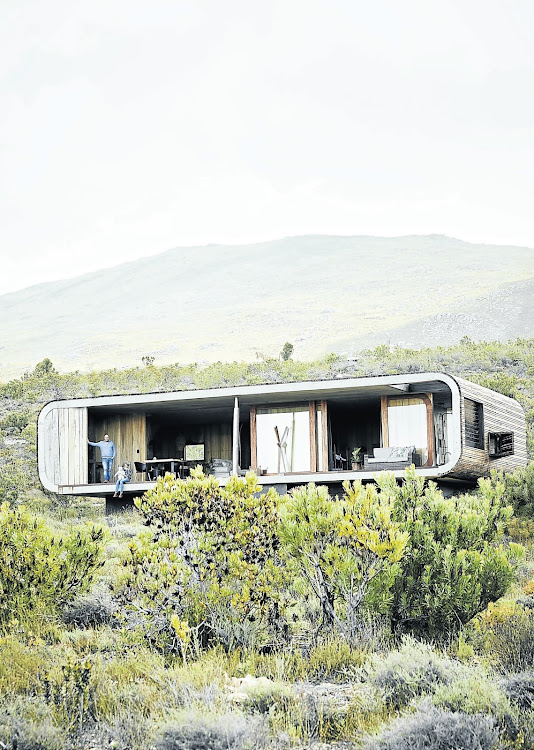 The KolKol pod appears to ‘float’ above the landscape and has been designed to blend into its environment, with wooden exterior cladding and decking softening the lines of the concrete. shell.
Image: Warren Heath/Bureaux

For a start, there's the way it is situated in the landscape, seemingly hovering above it, yet also at one with the slope of the mountainside.

"We carefully considered where to place them," says KolKol owner and pod designer Rudi Oosthuyse, with what it's soon clear is his usual level of quiet understatement.

You need only spend an hour with this innovative thinker to understand that when Rudi modestly says "carefully considered" he actually means, "I spent more than a decade getting to know all this land and then looked with the utmost care at precisely where this structure should be situated, taking into account the views, the movements of the sun, the prevailing winds and the impact on the indigenous fynbos plants that surround it."

Then there's the actual design of the pod, which Rudi — along with his wife, Karen — also dreamed up pretty much in its entirety.

They had built a first set of "more conventional mountain cabins" says Rudi, when they first started developing accommodation options in 2005. These are located on one of the higher slopes some distance above the site where the pod has been erected. But, he adds, "I've always had this sort of shape in my head. So when the time came to build this, I drew it all, and then got an architect to make detailed plans for council approval."

From the outside, the pod is almost a rigidly rectangular box, except that the roof and floor are connected to the structure's side walls via a gentle curve. The "box" shape was cast, from reinforced concrete, on site by Rudi and his team. "We got an engineer to help us with planning the reinforcements that were necessary throughout," he says. 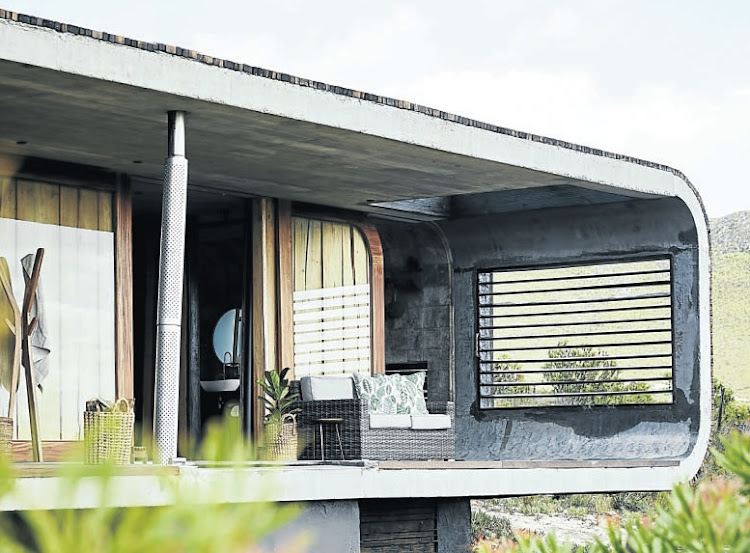 The front of the KolKol pod opens up to the wooden deck and the views of the Van der Stel pass via wood and glass sliding doors.
Image: Warren Heath/Bureaux 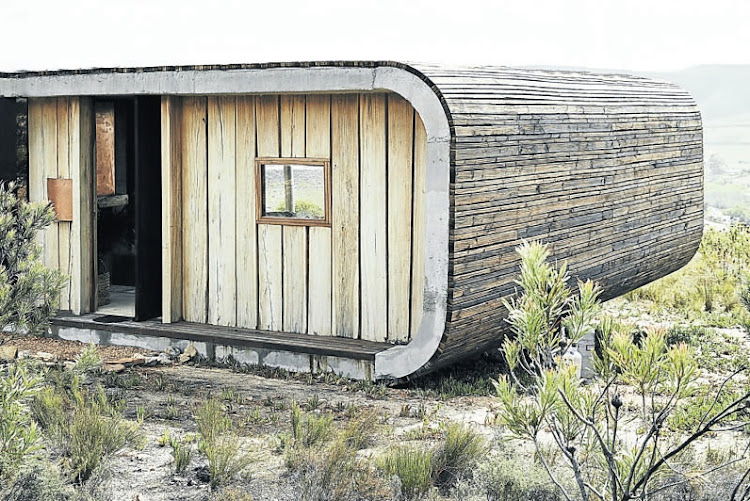 The rear wall of pod features more wood than the front in the form of chunky, rough-hewn panels.
Image: Warren Heath/Bureaux

The severe rectangular lines are softened by the curves, as well as by the fact that the exterior of the concrete shell is entirely clad in rough-hewn, dark-stained timber. This softening effect is further enhanced by the use of thick wooden panels to form the rear wall, in combination with large sliding glass and wood doors at the front.

The latter allow for the views to be panoramic even when the pod is entirely closed to the elements, but can also be pushed away completely in front of the main living area and bedroom-bathroom areas.

This is a compact structure: the pod features an indoor space nominally divided into two sections - for living and for sleeping - by a large central fireplace with an integrated copper chimney. 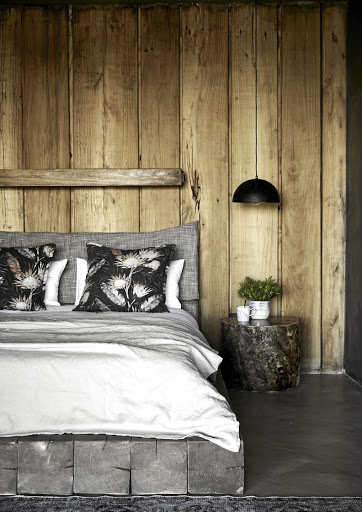 Rudi and his team made the built-in bed and created the simple varnished tree stumps that are used as bedside tables. A chunky wooden shelf doubles as storage and the housing for the bedside light switches.
Image: Warren Heath/Bureaux 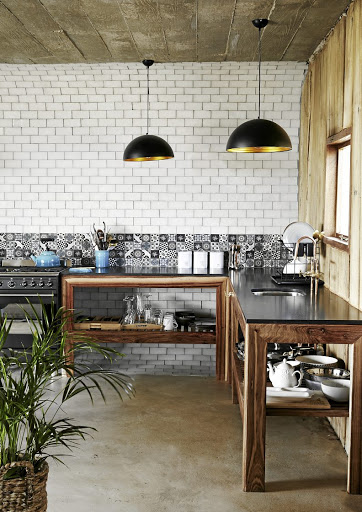 The kitchen is tucked into the back corner of the pod and features plenty of prep space, courtesy of the simple open kitchen units made on site by Rudi and his team.
Image: Warren Heath/Bureaux

The living-area side of this fireplace is open, and the back of it faces the bedroom, with a glass panel that adds a dimension of space-enhancing transparency to the interior, while also allowing guests to go to sleep in the colder months with the glowing embers of a warm fire comfortingly visible through the glass.

The wooden front deck of the pod runs along its entire length - you can access it from the living space as well as from the bedroom-bathroom area - and constitutes a seamless extension of the interior spaces when the weather allows.

Outside the bedroom-bathroom is an outdoor shower, while an all-weather couch is positioned nearby for exterior lounging.

Then there is a sunken wood-fired hot tub and, beyond that, an outdoor dining table, which is in turn adjacent to the interior living and dining area - as well as to the deck's built-in outdoor cooking zone at the end. It all works together beautifully as an almost seamless and very pleasing open-plan space. 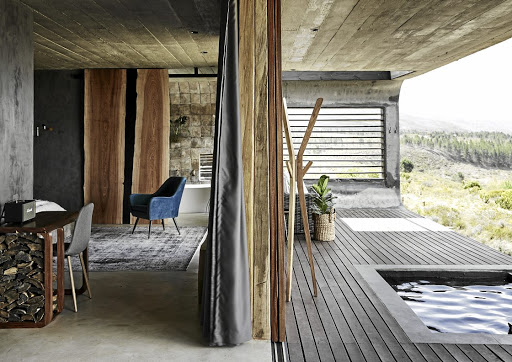 The pod uses materials and textures in ways that make for a seamless feel across the indoors and the exterior deck.
Image: Warren Heath/Bureaux

The pod has a unique aesthetic - part rough-hewn and natural, part linear and contemporary, part luxuriously comfortable - and it embodies the Oosthuyses' spirit of innovation, as well as their meticulous attention to every detail.

The casting of the concrete that was to be left bare, for example, involved carefully preparing wooden casting panels from which the concrete picked up textures that add softening surface interest. All the wood used was sourced locally from old plantings of alien gum trees that were being removed by other farmers in the area.

And many of the fixtures and furnishings - such as the solid wooden tables - were either created by local artisans or in situ, which was the case with many of the bathroom fixtures, including the unique basin and bath spouts. 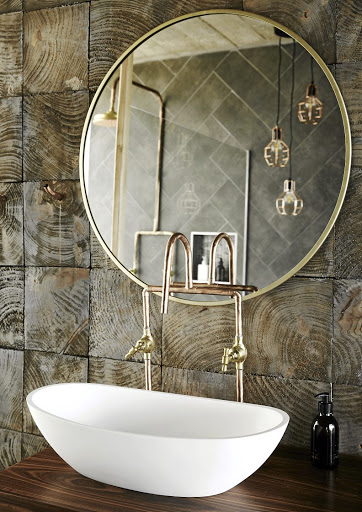 Rudi and his team made the wooden vanity shelf and put together the basin mixer and ingenious bath spout on site, using basic plumbing supplies and taps.
Image: Warren Heath/Bureaux 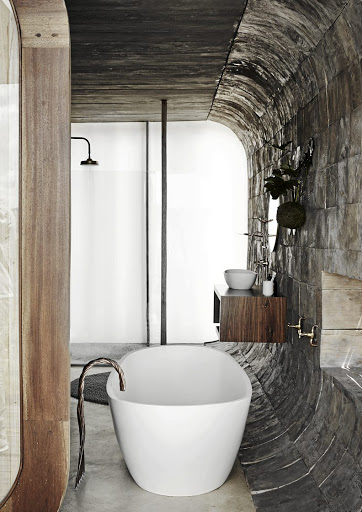 Wood cladding runs up the bathroom wall through the curve that links it to the ceiling, adding a tactile and natural feeling to the space.
Image: Warren Heath/Bureaux

In terms of the interior decoration - very much Karen's milieu - the pods have been given a casually luxe look, with lots of warm colours and textures setting off the concrete and wood of the finishes.

The laid-back feel is completed with textured woven lampshades, contemporary shapes for the chairs and couches, and a few judicious nods to the indigenous flora of the surrounding landscape in the form of the fabrics chosen for scatter cushions.

Special additional elements include an indoor pizza oven as well as the latest iteration of KolKol's well-known wood-fired hot tubs. Also designed and made by Rudi, the tubs feature water heated via a stainless-steel, wood-fired stove that fits neatly into one corner. Along with the many innovations and thoughtful details that characterise the pod, it is finishing touches such as these that make this small abode unique.

While a classic modernist house can be thought of as a 'machine for living', this one cleverly incorporates elements that give it a sense of being ...
Lifestyle
2 years ago

This Cape home is an architectural wonder of wood & concrete

This new house on the Atlantic Seaboard challenges convention — aiming to be more deferential to the natural beauty of its setting and friendlier to ...
Lifestyle
4 years ago