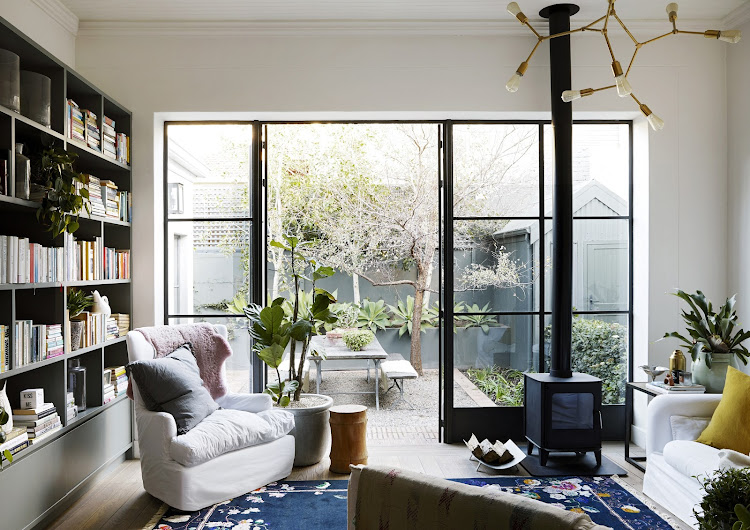 The living area is held together with a blue floral rug, which adds tone and texture to the grey palette.
Image: Elsa Young/Bureaux

Tucked away at the end of a panhandle in Cape Town's Oranjezicht — a neighbourhood well known for its attractive Victorian-era villas — interior designer Lynne Harris-Whitfield's home is set back from the road, behind a squad of square-pruned trees.

But the house soon reveals itself as something special, combining as it does a familiar sense of engaging Victorian poise with a different sense of scale: the building features a very untypical flat roof in its second-floor addition.

When Harris-Whitfield and her husband, Gavin, bought the house 13 years ago, it was a single-storey, three-bedroom cottage with good bones, good scale and an unusual double gable.

A week before they moved in, a fire gutted the interior, but they decided to turn adversity into advantage. So, they rebuilt, replacing many of the original period finishes (including floors, doors and fireplaces) with more contemporary versions.

Several years later — at which point the couple had two daughters and a son on the way — the family needed more space, but didn't want to move because they loved the location. They embarked on further alterations and additions, which resulted in two additional bedrooms for the girls on a new first floor, and generated both better flow and a more modern, user-friendly ground level. 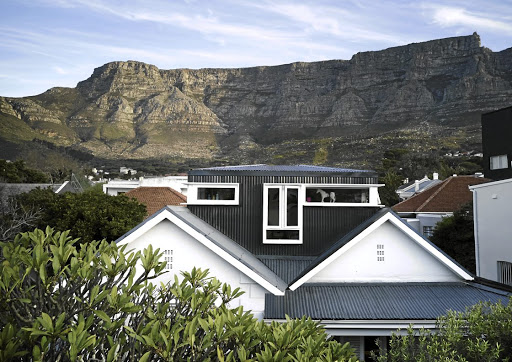 The second-storey addition is a flat-roofed intervention in the eaves, clad in galvanized steel and painted the same colour as the two pitched gables.
Image: Elsa Young/Bureaux 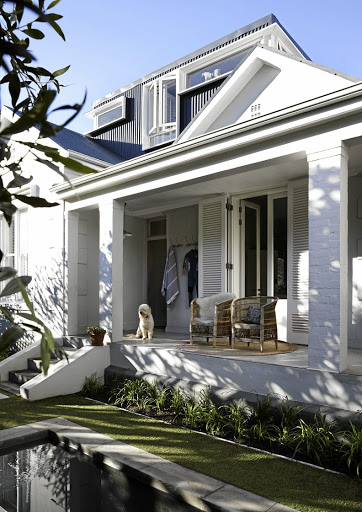 The dining area leads onto the veranda, pool and garden beyond via French doors.
Image: Elsa Young/Bureaux 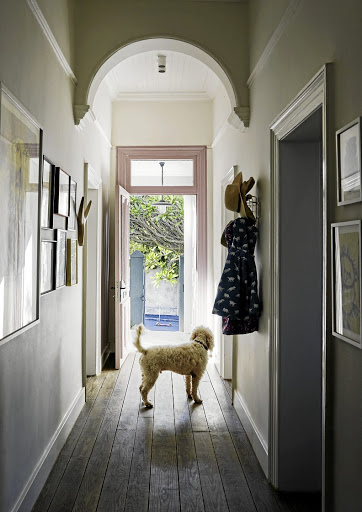 Rufus, the family's Labradoodle, in the entrance of the house.
Image: Elsa Young/Bureaux

Getting approval for the plans for the first-floor extension involved an application to the South African heritage council — and the latter turned out to prefer a contemporary profile for the rooftop addition rather than an imitative Victorian-style design.

The limited-edition nature of the original blueprints for the villas built in Cape Town during the last years of the 19th century meant, they said, that the roof profile should not be changed in a way that suggested it was a further version of those original designs, but rather should be done in a way that worked with the existing structure in a complementary way. The result is precisely this.

Harris-Whitfield's background in interior architecture, followed by stints as a design consultant and trend analyst for a fashion, food and lifestyle retail chain, gave her all the resources she needed to drive the design direction herself. She also knew the potential that could be unlocked from the property.

The aim was to update floor plans and use colour, carefully selected finishes, and contemporary design savvy to take it to the next level, while also retaining the original home's intrinsic character. 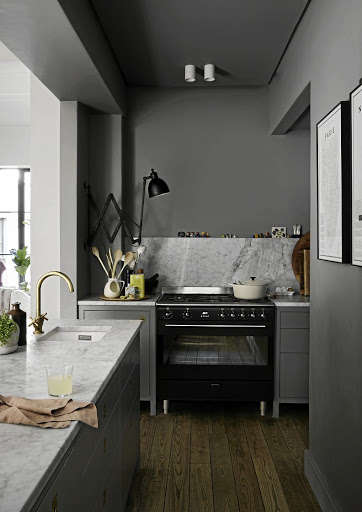 The walls and cabinetry in the kitchen are the same shade, mixed by a colour specialist.
Image: Elsa Young/Bureaux 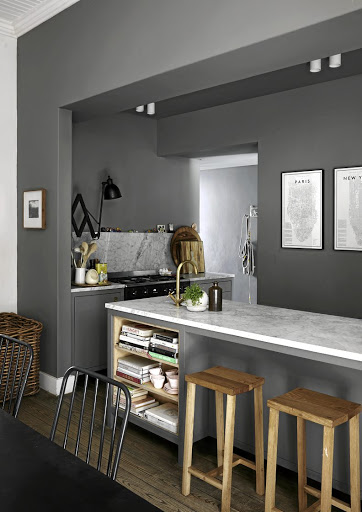 Could has been used to zone and connect the dining and kitchen areas.
Image: Elsa Young/Bureaux 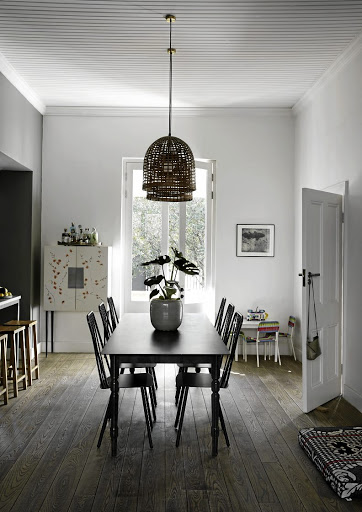 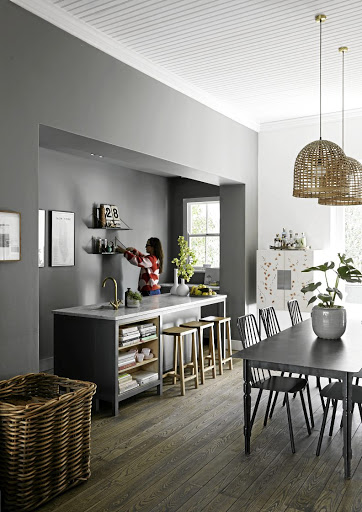 LHW Studio, Harris-Whitfield's interior design practice, is known for taking this approach to projects, and for the relaxed and easy-going spaces that it creates. “It's about getting the volumes and flow right, getting the junctions between spaces smooth, and getting the light right,” she says.

Easier said than done for most of us, but in her home, she's succeeded in doing so.

While much of the focus of the rebuild was on opening up the interiors and improving the flow between the kitchen, dining, living and outdoor areas, Harris-Whitfield says she is not a huge fan of completely open-plan living. Rather, it was important for her to find a middle point between expanding spaces and containing them too. “I like to use colour and material finishes almost as structural tools, to visually zone or link spaces where there are no actual physical links,” she says.

Asked about the home's distinctive yet understated palette of colours and textures, Harris-Whitfield says: “Key notes were a blackish burnt umber for metal finishes; white tones for marble and tiles; and a particular grey green eucalyptus colour, which I used for certain walls and all cabinetry on the ground floor.” 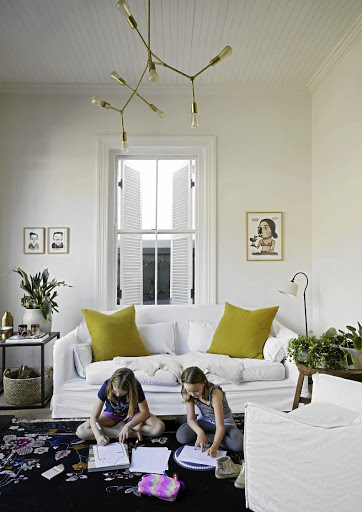 The homeowner opted for slipcovers because she 'wanted an easy living family home with nothing too precious."
Image: Elsa Young/Bureaux 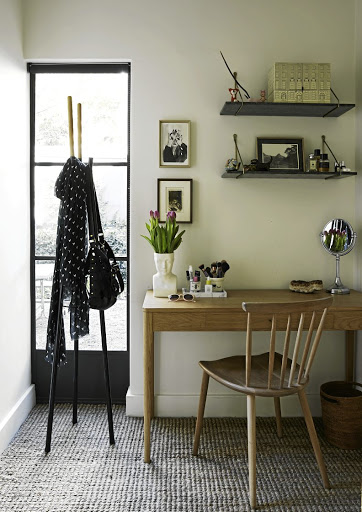 A mini workstation transitions the space between the main bedroom and living area.
Image: Elsa Young/Bureaux 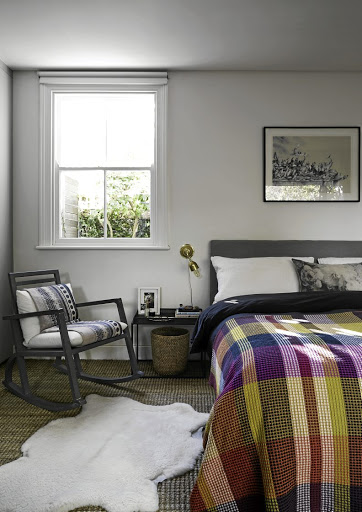 The main bedroom opens out onto a private courtyard. A pop of colour is added to the room through a funky plaid blanket.
Image: Elsa Young/Bureaux 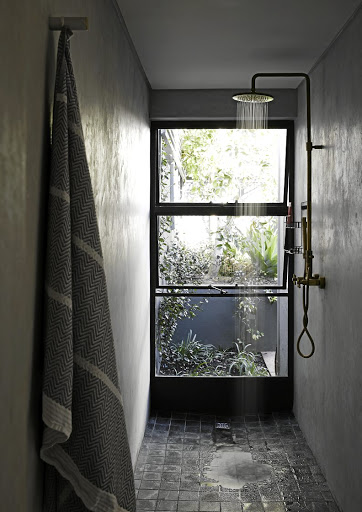 The shower is on the opposite side of the main bedroom to the bathroom, and flanks the courtyard. The silver granite cobblestones used for the floor increase the outdoorsy atmosphere.
Image: Elsa Young/Bureaux

The finishing touches took the form of “wood with a grain, brass, a woven basketry element for texture, ceramics for a crafty touch, and lots of leafy plants,” she adds. Harris-Whitfield has her paint colours formulated by colour specialist Freya Lincoln because, she says, “choosing paint that way is foolproof in that you get the perfect colours for your mood board. And avoiding mistakes means that everything works out quicker and cheaper.”

While the spaces at ground level feel relaxed, the new first floor has a more lighthearted and playful atmosphere. Seen from the outside, the addition is unapologetically boxy, while inside it's the ultimate attic, designed to max out the available space for two bedrooms plus a bathroom. These rooms are linked by a short passageway that features built-in storage and a desk where the girls do their homework. 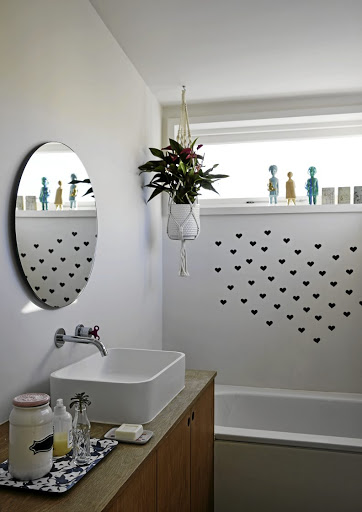 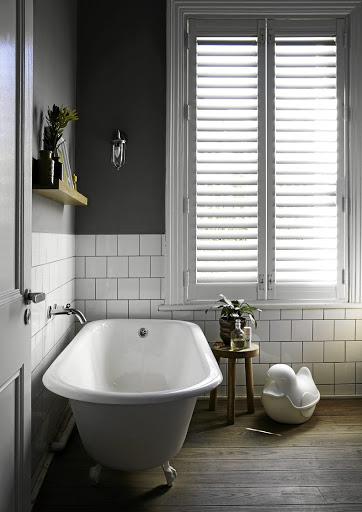 The children's bathroom downstairs still has the ball-and-claw bath that was original to the house.
Image: Elsa Young/Bureaux

When it came to creating the décor in their rooms, the kids “have every say when it comes to decorating”, says Harris-Whitfield. As a result, each of the spaces has a different riff on the romantic layering of printed and embroidered bedding, plus fun feminine elements that animate the entire floor via a mix of vintage, retro and modern whimsy.

Similarly, when decorating the living area downstairs, Harris-Whitfield went for an easy-going look and feel that centres around four seating pieces, all of which are slip covered in white and positioned on a dashing floral rug. The combination works perfectly as a comfy, cosy adjunct to the tight edit of design elements in the reworked space. “I like to start with the best fit-for-purpose finishes,” says Harris-Whitfield, “and simply have fun with the rest.” — Bureaux.co.za

This garden cottage in Stellenbosch honours its past with sentimental touches, but thanks to its functional design it looks firmly to the future
Lifestyle
6 months ago

IN PICS | Salvaged timber shines in this warm family home

By combining respect for the charms of a heritage building with a contemporary architectural approach, an award-winning renovation has brought this ...
Lifestyle
8 months ago