For almost 15 years, Casamento has provided a refreshing contemporary take on traditional forms of needlework, decorating dining chairs, headboards, sofas and cushions with intricate stitches and meticulous French knots, for homes, lodges, hotels and restaurants. The business was founded by Starry-Eve Collett and her twin sister, Misty-Dawn Flaherty, in 2007, and began as a company reupholstering mid-century furniture.

After learning of the work that Vladimir Kagan and his wife, Erica Wilson, were doing together — him making sturdy pieces of furniture, her stitching beautiful scenes onto the fabric — the twins were inspired to introduce embroidery to their reupholstered items, teaching themselves the age-old handcraft through any book they could find.

Flaherty subsequently left to pursue other interests, but Collett kept Casamento going, despite this approach to furniture not being well understood back then.

"It was when Brazilian craft was at its height, and there was this whole new wave of artisans and craftspeople coming into fashion and homeware in South America," says Collett. "I saw it as a great vision for South Africa, but we were a little ahead of our time."

It would take Cape Town until 2014 to develop into its World Design Capital status, but Casamento had acquired a strong following by then. From its humble beginnings in Loop Street, with a weekend stand at the Neighbourgoods Market, it became the go-to place for unique, high-quality furniture, making bespoke items for renowned places such as top restaurant The Test Kitchen and Nando's Central Kitchen. 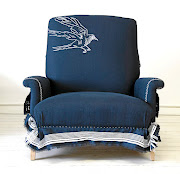 After a subsequent decade at the Woodstock Foundry, Casamento relocated to Muizenberg last year, where it produces its entire range from beginning to end, with in-house artisanal frame-worker Lukholo Mesani and a team of six upholsterers, seamstresses and embroiderers. Upholstery ranges from leather and linen to velvet and wool, assiduously embroidered with nature-inspired images. Beading and appliqué has recently been added to Casamento's repertoire, embellishing cushion covers and sofa edges with added eye-catching detail.

Leaving a former career in catering, where everything was perishable, Collett was attracted to the durability of furniture. "I could never understand why people were throwing such beautiful pieces away," she says, talking of her initial drive to restore old items.

This mindset for sustainability continues despite now producing all furniture from scratch. Casamento uses wood from sustainable plantations, creates its underfelt from textile waste and uses latex produced from rubber trees for its cushions. "My great pride is that you'll be giving these solid pieces to your grandchildren one day," says Collett of the long-lasting quality and timeless style.

Image: Kelly Walsh The team behind the product.

For her, Casamento is more than a furniture business — it is a vessel for inspiration. "My passion is to create something that has an effect on people much like an artwork would have, but in a subtle way; that they walk away feeling empowered by their own creative awakening."