A new book on the work of the acclaimed local architect is a well-timed tribute to the singular vision of a man ahead of his time, writes Graham Wood

It has been a dozen years since local architect Peter Rich’s Mapungubwe Interpretation Centre was named the World Building of the Year at the World Architecture Festival in Barcelona.

But for decades before that international recognition in 2009, Rich had already determinedly been pursuing his singular vision, and had completed some wonderful, ground-breaking projects.

Among them is his own home, a modest but landmark experiment in what he has come to refer to as “African space-making”, where I met him to discuss a new book on his work, The Architecture of Peter Rich: Conversation with Africa by Jonathan Noble. 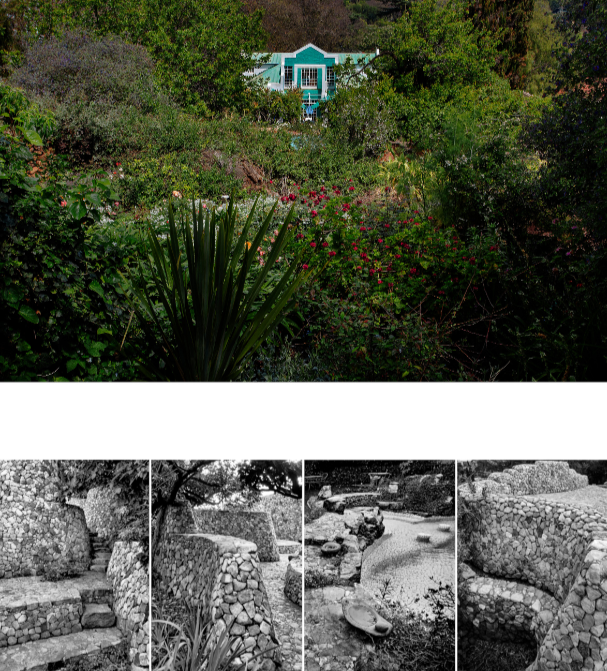 A view of the back of Peter Rich’s home from the top of the terraced garden; a rich tapestry of paths, platforms and stone walls. Garden with stone terraces.
Image: Peter Rich

Since the award, Rich has been catapulted on to the world stage, his ideas realised at new scale and with greater scope than ever.

Wu Shan, a huge resort in northwestern China, allowed him to realise some of the ideas he’d explored in various unbuilt projects. Others, such as an incredible office for the US optionsandcommodities trader Joe Ritchie in Chicago, gave him yet another context to explore, and smaller but equally dazzling structures like his Rwanda Cricket Pavilion in Kigali extended his range. (And that’s not to mention much larger concepts and proposals for urban designs in Rwanda and South Sudan.)

His beautiful architectural drawings had an entire exhibition dedicated to them at the Venice Biennale in 2018, but despite all of this, until now there has been no proper book bringing together his work in a single volume. 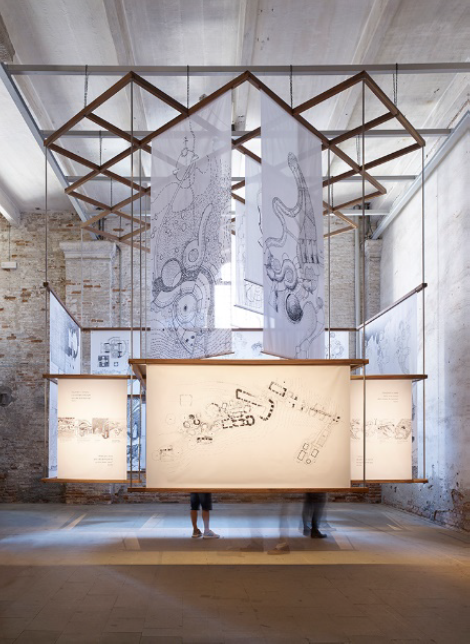 Jonathan Noble, head of architecture at the University of the Free State, has brought together sustained research, including more than 20 hours of interviews with Rich himself, drawings and photographs in a proper dedicated monograph that is nevertheless accessible to non-specialist readers.

It gives Rich not just the treatment his work deserves but also a popular platform, which is much needed for a figure who is practically a national treasure. Yet beyond Mapungubwe, South Africans barely know a fraction of what he has done, or the truly pioneering ideas he has been developing for almost half a century. 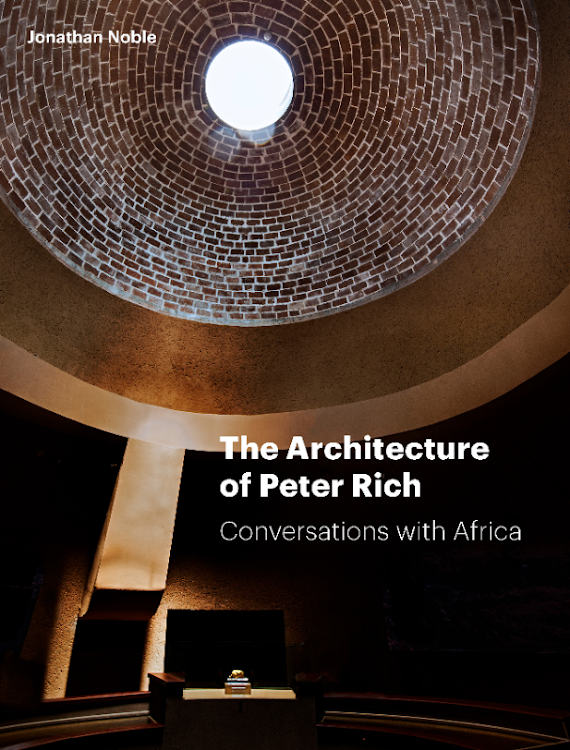 The book is also a powerful corrective, because, in showcasing Rich’s work, it offers a vision of what architecture from Africa and SA could be. Suddenly, there’s a clear picture of the ways in which home-grown ideas could actually lead the rest of the world.

And, more importantly, it shows how ideas rooted on home turf can be better, more appropriate and do more good (not to mention simply appear more beautiful) than attempts all too common throughout the continent to show sophistication by throwing up “gleaming” glass towers and other bland global symbols of progress and modernity.

The book is an affirmation of cultural value, documenting how Rich has recognised and realised the value of what is here, and given it value and currency.

The Mapungubwe Interpretation Centre was built on one of the most important heritage sites in the country (where the famous Golden Rhino was discovered and the most sophisticated societies in Southern Africa lived more than 1,000 years ago).

In its design, Rich pioneered the use of innovative, hand-pressed soil tiles, which could be made on-site, dried in the sun and required no other specialist equipment. He used them to create timbrel vaults, something of an ancient lost art, combining complex engineering with simple building techniques.

In fact, it took collaborations with engineers from the Massachusetts Institute of Technology and Cambridge University to develop, but could be built by local farmworkers, creating employment and opportunities for skills development. 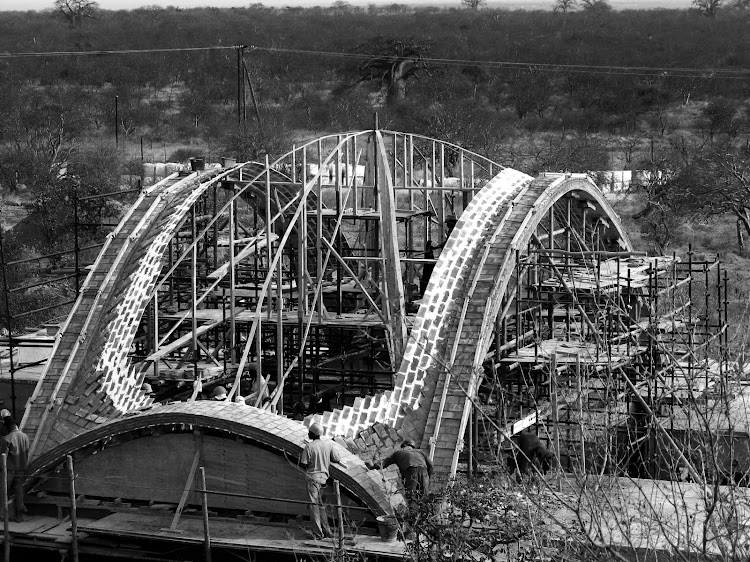 A vault at the Mapungubwe Interpretation Centre during construction.
Image: Barry Goldman

Rich delightedly related an anecdote in which University of Cape Town architecture professor Nic Coetzer noted that his students inevitably read the international praise for the centre as recognition for African architecture. And in many ways it is, but not necessarily in the way they suspect.

The vaulted domes at Mapungubwe do indeed fuse ancient building methods with modern structural engineering, but the history of the technique is complicated. Rich sketches a lineage via North Africa to Spain (timbrel vaulting is also called Catalan vaulting because of its extensive use there), and from there to the US and Mexico, and then back to SA — via a mid-century South African architect working in the UK!

Its appropriateness has less to do with ideas of cultural purity and points of origin and more to do with its context and historical moment, the kind of economy you’re operating in, and available skills. The organic shapes of the domes might have arrived at an appropriate look and feel, but they are inspired more by the landscape than local vernacular. There’s no claim to authenticity via nationalist dogma.

Rich tells a good version of the story of how he began documenting local vernacular architecture in the 1970s, starting with the Ndebele. As a young man “fired up by activism” in the 1960s, he and his wife eloped and headed to Mozambique to visit his mentor, the legendary architect and teacher Pancho Guedes.

On his way, Rich was struck by the Ndebele settlements they passed, and Guedes encouraged him to go out into the field and document them. “He said, ‘Don’t take anthropologists, don’t take art historians,’” recalls Rich. “‘Just go and do what they can’t do ... document in plan, section and elevation ….’”

Which he did, hurried on by PW Botha’s arrival as prime minister and his plans to relocate the Ndebele from the farms on which they lived to a new bantustan, KwaNdebele.

Rich speaks poetically of “the thinking hand” and of drawing as a way of understanding architecture on a physical level, and a way of reconciling individual creativity and cultural heritage. He absolutely marvels at the “embodied intelligence” in everything from Ndebele architecture and decoration to the complexity of the beadwork he encountered.

“You have great difficulty in SA actually finding a living vernacular today,” he adds. 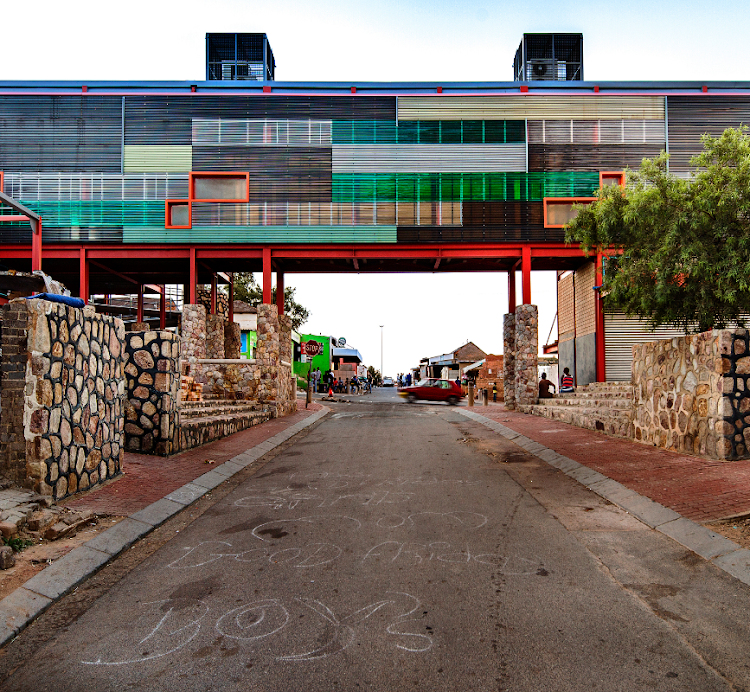 The Alexandra Heritage Centre in Johannesburg is another of architect Peter Rich's projects.
Image: Barry Goldman

While he went on to document other architectural traditions, and even modern townships such as Johannesburg’s Alexandra and Rwandan communities, the Ndebele was perhaps most formative in Rich’s career. The geometries of the settlements he studied became the basis of his understanding of “African space-making”.

He rattles off terms like “axiality, duality, bilateral symmetry, contesting symmetries”, but essentially his point seems to be that there’s a kind of formality (he used the word “politeness” too) in Ndebele architecture that shapes and sustains traditions, and which is important to recognise if one wants to sustain them in contemporary life.

But another lesson he learnt from the Ndebele is captured in a quote he recalls from his interviews with Ndebele women at the time. Part of what makes Ndebele architecture so fascinating is the way in which it combines elements from all that its architects encountered, blending tradition with new influences. There are touches of Boer-farm architecture and even Cape-Dutch influences in Ndebele design, not to mention more modern influences such as electricity pylons and even Art Deco train stations.

The quote was: “We see what we want to see, and we make it our own.”

What Rich took from that was, “in reinterpreting something through deep understanding and investing it with symbolic meaning in a different context, you can make it valuable.”

A significant part of his work — though beyond the scope of this particular book — involves translating just such a deep understanding of African space-making into contemporary urban planning. He talks about designing in a way that is “enabling”.

African cities, he points out, are growing so much more rapidly than their counterparts in Europe or the US ever did. The kind of expansion that took 100 years in European cities is taking place in less than a decade in Africa.

That underlines the urgency of developing along local lines now, while the expansion is taking place: rejecting the bland placeless globalism of contemporary developers and designing buildings and cities that sustain the aspects of local culture that newly urbanised populations value.

But African space-making is not about a particular style for Rich. Apart from the fusions of space-making traditions in his own home, he has translated or applied principles of African space-making in a modernist pool pavilion, the Mennell Pavilion in Westcliff. At a glance, looks a bit like an example of Californian modernism. The spatial experience, however, is something locally derived, expressed in modernist forms.

Tradition, for Rich, is not about replicating the past — the African equivalent of building faux Victorian or Tudor houses in 21st-century London — but rather about enabling traditions to persist in contemporary — and future — contexts.

Tradition, for Rich, is not about replicating the past but rather about enabling traditions to persist in contemporary — and future — contexts

Style might be secondary to Rich, but he has strong opinions about what he sees as the debilitating Western obsession with perfection. He refers to the deadening corporate headquarters that have more in common with the hyper-perfected interiors of luxury cars than the buildings and homes we can fully occupy and come to love. He judges the success of a building by a sense of harmony or tranquillity, not the perfection of its finishes.

The organicism of his recent work — the domes and tendrils — and the roughness of materials and textures is something he values. Like the Pritzker Prize-winning Indian architect Balkrishna Doshi, who wrote the introduction to Noble’s book, Rich equates the contemporary Western obsession with perfection as a “damaging construct”, unhealthily tied to a notion of certainty. Rich notes that Doshi considers uncertainty to be a creative force.

The almost unfinished, highly tactile quality of his work is as much about the human experience of architecture as it is an expression of optimism: a faith in the possibilities offered by the future rather than the spiritual and philosophical dead end of corporate slickness, which amounts to a futile and debilitating attempt to arrest time in a vision of certainty as perfection.

It’s a faith that there are things that can only be done here and now. “I also believe the philosophy comes out of this situation,” says Rich. “I don’t believe in a dogma.”

Architects have been straying from the century-old modernist template to experiment with decoration, space and materials
Lifestyle
1 year ago

The waterways and islands in the Okavango Delta are a masterpiece, and a perfect backdrop for the ‘living gallery’ that is Xigera Safari Lodge
Lifestyle
6 months ago

WATCH | Is this the house of the future? SA cities join green build projects

Communal spaces centred around producing your own food in an inside-out space with a water feature - reminiscent of a kraal. That’s how SA ...
Lifestyle
10 months ago