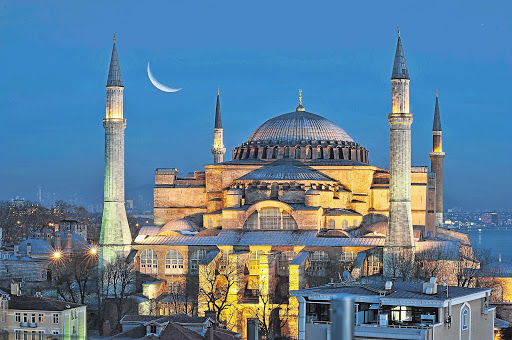 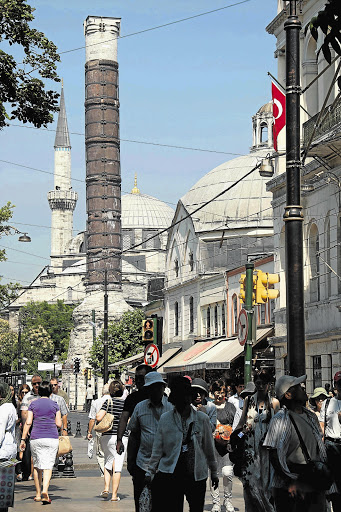 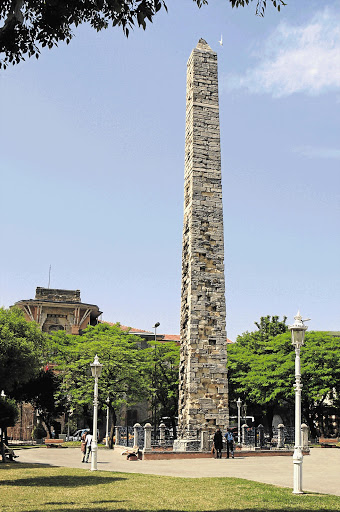 If you know where to look, Turkey's Roman past pokes up throughout the city, as Harry Mount discovers

Exactly 1700 years ago, in 312AD, the Roman emperor Constantine had a vision that changed the course of the Roman Empire and ultimately turned Britain into a Christian country.

The vision appeared to him just before the Battle of the Milvian Bridge. His adversary was Maxentius, a rival for the emperor's crown. Looking above the heads of his marching soldiers, Constantine saw a burning cross of light over the sun, next to the Greek words Ev Toutw Nika - "In this sign, you will conquer." The following night, Christ appeared to Constantine in a dream, telling him to use the sign against his enemies.

Constantine did as he was told. He stuck a cross on his army's shields, won the battle, killed Maxentius, became undisputed Roman emperor, and the rest is history - Christian history. From that point on, or so the legend goes, Constantine began his conversion to Christianity and, in time, the Roman empire became a Christian Roman empire.

The heart of that new empire was not to be Rome but the Ancient Greek city of Byzantium. In 330AD, Constantine made it the new imperial capital; and in the same year it was renamed Constantinople in his honour (and nicknamed "New Rome"). Along with the Roman imperial court, the senate and the supreme courts moved to Constantinople from old Rome.

It's easy to forget all this when you arrive in modern Istanbul, its skyline dominated by minarets, your day punctuated by the muezzin's call to prayer. But, if you look, the city's Roman skeleton pokes up through the Islamic skin all over the place. After all, the city remained Christian for 1100 years after Constantine's death. And it only became officially known as Istanbul as late as 1930.

For those in search of Istanbul's Roman bones, the first stop is Hagia Sophia, Constantinople's cathedral for more than a millennium. Built by Constantius, Constantine's son, in around 360AD, it was burnt down, rebuilt in 415AD, burnt down again, and rebuilt by the Emperor Justinian in 532AD. It is largely Justinian's building you see today.

Converted into a mosque the day after Constantinople fell to Sultan Mehmet II in 1453, it was made into a secular museum by Ataturk in 1934. Today, though, it still smacks strongly of Byzantine Christianity, in its domes and rounded arches, in its cross plan, and in its glorious mosaics, restored in 1964 after being obscured by plaster and whitewash under the Ottomans.

The new Muslim rulers were pretty laid-back about the Roman buildings they inherited. Rather than knocking them down, they just adapted them, inserting a mihrab (a niche pointing towards Mecca) and mimber (a pulpit) into Hagia Sophia to turn it into the mosque of Ayasofya.

With some Roman buildings, they didn't make any changes at all. Five minutes from Hagia Sophia is the Basilica Cistern, one of hundreds of underground caverns carved out by the Romans to store drinking water. For all its strategic waterside location - poised between the Bosporus, the Golden Horn and the Sea of Marmara - Constantinople was painfully short of natural springs. The Basilica Cistern, built by Justinian in 532, was the biggest and still - despite the queues, the dodgy music and a morose automated crocodile submerged in the underground lake - it overwhelms. Some 336 mammoth Corinthian columns carry delicate domes of slim Roman bricks arranged in a herringbone pattern.

After seeing the freakily well-preserved cistern, the visitor to Constantine's Hippodrome - next door - needs some imagination to recall the Ben Hurs who gunned their chariots up and down this 400m-long racecourse. It's now lined with tourist coaches and street hawkers selling corn on the cob, but you can still make out the old lines of the track.

The Hippodrome was Roman Constantinople's political arena, as well as a sporting one - it was where the new imperial capital was officially founded in 330AD. Constantine covered the spina - the raised terrace in the middle of the track - with statues, columns and obelisks from across the empire; as the fourth-century scholar Jerome said: "Dedicatur Constantinopolis omnium urbium nuditate" - "Constantinople is dedicated by stripping all the other cities."

Three of those monuments survive: an Egyptian obelisk, from 1500BC; a stone pillar raised by Constantine; and the distinctly odd Serpentine Column, brought from Delphi by Constantine. The three intertwining bronze snakes once supported a column in Delphi's Temple of Apollo, one of the most important in Ancient Greece.

Compelling as these survivals are, they also compel mass crowds of tourists. Ten minutes' walk west and you have Roman Constantinople to yourself - well, by yourself I mean you're the only foreigner among a crowd of locals. In the middle of Yeniceriler Caddesi, Istanbul's high street, stands the forlorn Column of Constantine. Now flanked by mosques, it was erected by the emperor at the city's foundation. Passing shoppers barely give the dilapidated marble column, wrapped in protective iron hoops, a second glance.

But the reason this is Istanbul's high street is that it was Roman Constantinople's high street, too - just down the road was the late-fourth-century forum of the emperor Theodosius, the biggest public square in Constantinople. The stumps of Theodosius's columns survive, carved with an eastern-looking, sinuous peacock's eyes.

Walk five minutes north to Kalenderhane Camii mosque and you walk back all those 1700 years to Roman Constantinople. The mosque was originally the Church of the Theotokos, a late-12th-century mini-Hagia Sophia, with that familiar combination of domes and rounded arches. The gentle janitor took my hand to show me around the mosque, empty but for two office workers on their lunch break, prostrating themselves towards Mecca.

Outside the mosque, choked with undergrowth, are the ruins of a Roman bath, with a fallen Corinthian capital lying next to the old hypocaust heating system. The baths and mosque are squeezed up against a Roman aqueduct, built by Emperor Valens in 375AD to fill one of those cisterns. The aqueduct runs for nearly 800m, in very good condition, above the low-slung rooftops of Istanbul. If it were in London, it would be fenced off and covered with explanatory plaques and Keep Out signs. In Istanbul, they have built houses into the wall, piled their rubbish up against it, and even built a car park around it.

The aqueduct is taken utterly for granted, with the heartening attitude that comes from regular exposure to great ancient treasures. Roman Constantinople isn't a forgotten memory in modern Istanbul; it's part of it.