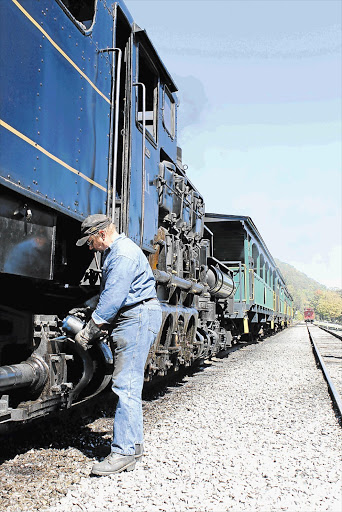 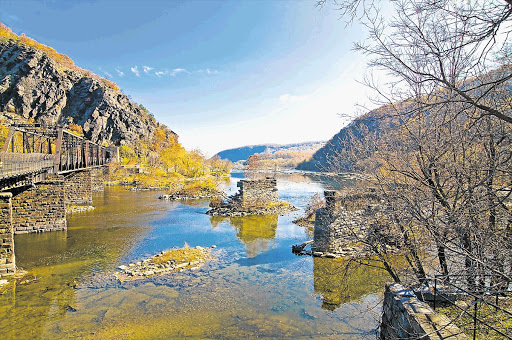 The opening line in John Denver's famous song about West Virginia is spot on.

Cody Himelrich, the brakeman on the mountain train, was telling me about his morning.

"I was out huntin' squirrels in them hills and this bear comes outta woods right in fronta me."

Cody slammed the brakes of the vintage train car as we prepared for another switchback.

Then he grinned: "I woulda shot him if he come any closer ."

It was my first day in West Virginia, and so far it was turning out to be as wild as advertised. I was among 100 or so sightseers on the Cass Scenic Railroad, a century-old logging train turned tourist trail deep in the Allegheny Mountains, part of the great Appalachian range that runs from Newfoundland to Alabama and divides West Virginia from Virginia. Below the train track lay a forested river valley, trees turned yellow and red. Beyond that, as far as the eye could see, were mountains. There was something timeless about this landscape.

Don't take my word for it.

"Life is old there, older than the trees, younger than the mountains, blowing like a breeze," John Denver sang in his 1971 ode to West Virginia, Take Me Home, Country Roads.

And yet, West Virginia had until recently been the most unsung of places. A 2012 survey found that a quarter of Americans were unaware it was a state at all and, though its eastern border is only an hour from Washington DC's Dulles Airport, it has barely registered with tourists from overseas.

That is changing. The state's rugged geography - towering mountains, white-water rivers, forested state parks (36 of them) - has made it the adventure-sports capital for the mid-Atlantic region. In June last year, the British tour operator America As You Like It began offering a seven-day West Virginia fly-drive, and now Complete North America has a 14-day Just West Virginia package.

Those who take either trip will enjoy a rare glimpse into a proud, independent mountain culture.

I was on a four-day road trip of the state, taking in its most spectacular landscapes, parks and historic towns, with Denver's song as my soundtrack.

Cass, on the Greenbrier River in Pocahontas County, four hours' drive west of Dulles, was my first stop. From 1902 to 1963 this was a booming lumber town. When roads and trucks replaced rail, the trains became obsolete. Then the state bought them, with eight locomotives, and turned the place into a park.

It's a rail enthusiast's dream. I took the one-hour, 6km trip to Whittaker, a logging station at 993m, taking my seat on the wooden bench in an open-sided converted log car. Our locomotive, a shiny, black, coal-fired Shay, circa 1927, powered us into the mountains, steam billowing from its stack. At various points its whistle blew, the echo resounding down the valley, scaring off the deer and, no doubt, Cody's bear.

At Whittaker, on a grassy plateau, we gazed out on the misty blue Appalachians. Above us, Bald Knob, at 1476m the highest point in the state, was a further three-hour train ride.

West Virginia's formidable terrain is central to its founding. The state was carved out of Virginia proper in 1863, at the height of the Civil War, in a Machiavellian move by President Lincoln. Virginia had already seceded from the Union, of course, but Lincoln knew his forces needed access to the federal armoury and arsenal at Harpers Ferry and the Baltimore & Ohio railroad that ran across the northwest. Why not create a new state?

He found a receptive audience among the rural mountain folk on the western side of the Allegheny. Mostly poor Scots-Irish and German settlers - banjo-picking Appalachians of lore - they were only too happy to be free of the tidewater aristocrats who lorded it over them from the east. That fierce, independent spirit still exists 150 years on.

You can spend the night at Cass in the Company Houses, 12 former logging workers' homes turned guest cottages, but I opted for a nearby ski resort.

Snowshoe is perched on Cheat Mountain, the second-highest peak in the state, a half-hour drive west. I expected a handful of rustic log cabins. It turned out to be a sophisticated resort: dozens of alpine-style lodges around a cobblestone "village", with restaurants, boutiques and piped music, the ski lift a short walk away.

The only problem was timing: I was between seasons. The resort's summer-sport options (mountain biking, golf) had shut down, and the snow had not yet fallen for skiing. Some half a million tourists visit Snowshoe each year, and during winter it's the most popular ski resort in the state. I made a promise to return.

The next morning I headed north for Canaan Valley, a lush, sheer-sided bowl barely 20km long and 8km wide, hollowed out of the spine of the Appalachians. I gazed down on it from a roadside viewing point. It looked like a wild, lost world.

Minutes later I was at its base, in the shadows of towering cliffs, hugging the Appalachian Highway - a narrow, two-lane river road winding past farmsteads and log cabins. Wood smoke drifted out of stone chimneys; sheep grazed in damp fields. I turned up the volume: "Dark and dusty, painted on the sky/ Misty taste of moonshine, teardrop in my eye." I suspect there are moonshiners aplenty in this valley. It's easy to see how a culture could marinate here in isolation, get lost in time.

That said, the valley has now become a fashionable bolt-hole for the affluent DC set, who buy up its log cabins for weekend retreats and, come winter, hit the slopes at Timberline and Canaan Valley, two upmarket ski resorts.

A few miles further northis Thomas, a gentrified former mining town. After a hike to the Blackwater Falls - a spectacular 18m cascade of amber-brown water in another pine-forested state park - I checked into the Fiddler's Roost Guest House. It was a simple five-room inn, converted from a coal-company duplex, on the main drag. Next door was the Purple Fiddle, where they served local microbrews in moonshiners' mason jars. I ordered an Almost Heaven - the opening words of Denver's song - as a bluegrass band sang about mountains and miners' ladies.

References to Country Roads are everywhere, so it came as a surprise to me when, a day later, in the historic mineral spa town of Berkeley Springs, well to the north, I learnt that John Denver was not actually from West Virginia; nor did he write the song.

"It was by Bill Nivert and Taffy Danoff, friends of his ," said Jeanne Mozier, author of the bestselling guide, Way Out in West Virginia , whom I met in the town .

"Bill and Taffy - they weren't from here either," she grinned. "They originally wrote the song about Maryland."

The Blue Ridge Mountains are barely in West Virginia, and the Shenandoah River is in the state for all of about 16km. There are far greater mountains and rivers in WV. Country Roads, it turns out, was written by city folk looking at West Virginia from the east, without setting foot in its wild heart.

"Still," Jeanne smiled, "it's such a beautiful song we adopted it anyway."

The West Virginia border is an hour's drive west of Washington DC.

The Company Houses at Cass Railroad State Park (cassrailroad.com) are simple two-storey Victorian homes once used by loggers. Three-bedroom houses from $137 per night.

Ledge House (theledgehouse.com) in Harpers Ferry is a stylish B&B with spectacular views of the Potomac and Shenandoah rivers, and the armoury and railway that Abraham Lincoln needed.

For coffee, sandwiches, live music and great beer, head to the Purple Fiddle (purplefiddle.com) located in a renovated trading store in downtown Thomas.

. For information about the state, see wvtourism.com. - The Daily Telegraph