8 pot-friendly destinations where you can light up besides Amsterdam 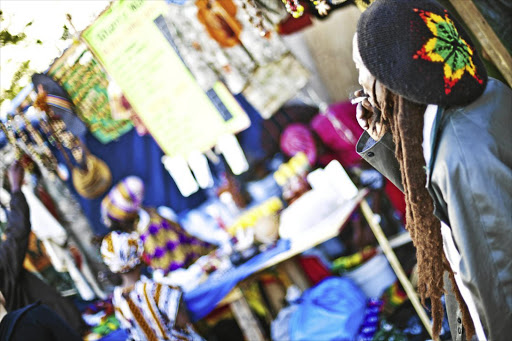 A Rasta takes a drag at the Rebel Salute Festival in St Elizabeth, Jamaica.
Image: iSTOCK

While it's still to be made official by the Constitutional Court, the law has effectively loosened up on marijuana smokers in South Africa, making them free to cultivate and use the herb in the privacy of their homes.

For those weed enthusiasts with an affection for wandering, we take a look at where the grass might be greener still.

In other words, Amsterdam aside, what are the best spots for the travelling toker and where else in the world can you safely get your stoner on?

DISCLAIMER: It's not strictly legal in all the places mentioned and some laws vary according to your age, the amount in your possession and whether you're partaking in a public or private place. Always familiarise yourself with the laws relevant to where you're going and use common sense.

Sometimes called "the Amsterdam of the east", Prague has a reputation for being pot-friendly and for even having bars and cafés where patrons can freely partake - but that's not technically accurate.

It is not legal to smoke marijuana in public, though police again are said to be willing to turn a blind eye (or nose). The bars where one can buy high strains of THC are not legal either.

Uruguay was the first country in the world to fully legalise the production, sale and use of marijuana. The government hopes to take over the industry and boot out drug traffickers by selling cannabis for $1 per gram.

Peru is widely regarded as having the most lenient drug-possession laws in South America. It's legal to have up to 8g of cannabis for personal use, as long as you don't have any other drugs and aren't selling it. While some report that the police lack clear guidelines and may persecute users anyway, perhaps the peak of any marijuana-smoker's list should be this country's top tourist attraction, Machu Picchu. The 15th-century Incan citadel set high in the Andes Mountains is one of the world's most cherished manmade wonders - and we doubt there exists a better place in the world to get a bit higher than high.

Since its legendary '60s hippie heyday, the City by the Bay has been known as a haven for weed smokers.

In this case it gets a special mention for the recent news that it's about to open the "world's first cannabis gym" later this year. According to its website at powerplantgym.com, the Power Plant Gym is a place where "members will be allowed to consume cannabis before or after working out".

The gym's claim is that the plant can actually reduce the risk of injury and enhance performance. "What is really special about Power Plant Fitness," it adds, "is that we are more than a gym, we are a full-blown health and wellness centre, focused on full body integrative health, wellness and fitness."

Marijuana use is also legal in Colorado and Oregon - to purchase, though the actual smoking must be done in private. Both states are known for their incredibly scenic landscapes and vibrant cities, and with the legal situation being as it is, both have many privately owned campgrounds where visitors are free to light up.

Marijuana possession remains illegal in Australia, yet this village in New South Wales is often referred to as "the drug capital of Australia" and is famous for its thriving cannabis-centric counter-culture.

Each May, thousands descend here for a festival they call Mardi Grass, which, according to the official website, "is held to protest the drug laws, educate people on the various uses of cannabis (medicinal, industrial, recreational and spiritual) and to celebrate the culture that has grown here over the last 40 years". Events include joint rolling and bong-throwing. This year's is on May 5, 6 and 7. See nimbinmardigrass.com.

In the collective consciousness, the dagga leaf is as synonymous with Jamaica as Bob Marley and the reggae flag, yet it remains illegal throughout the country. Many report, however, that law enforcement is fairly forgiving, as long as you're discreet. Particularly in the capital, buying weed is easy as there are plenty of resorts, street markets and taxi drivers who will be willing to sell directly to you.

Portugal decriminalised all drugs in 2001, including marijuana, cocaine and heroin. As the Independent reports, the country "decided to treat possession and use of small quantities of drugs as a public health issue, not a criminal one". The drugs remain illegal but now getting caught with them means a small fine and perhaps referral to a treatment programme.

It's still illegal if you are caught in possession of a large amount or appear to be selling it, but Vancouver has a long tradition of lenient laws and if you are caught with less than 30g it will most likely just be taken away - for now.

The city is also famously home to several medical marijuana dispensaries or "pot shops", some of which last year declared they would be selling to customers whether they had permits or not.

Under the pro-weed Prime Minister Justin Trudeau, the government is expected to introduce legislation to legalise marijuana this year and has appointed a task team to recommend proper parameters.