A white-faced clown and novice singer have turned a once-tatty country hotel into a weekend getaway sensation of flashing sequins, feasting and follies 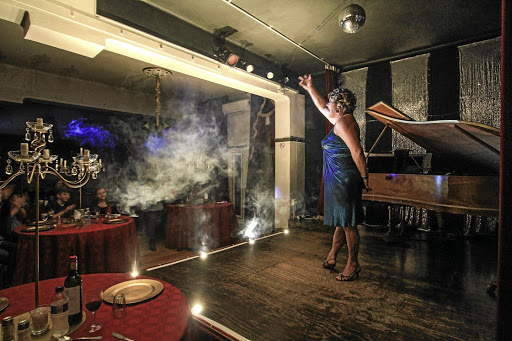 Dame Leyla Lamborghini (aka Jacques Rabie) lights up a Saturday night in the Karoo town of Steytlerville.
Image: Chris Marais

There are certain places and moments in the Karoo when it feels like you're driving smack-dab into a desert movie set.

Chugging along a dirt road up to the gates of the Karroo Theatrical Hotel outside Steytlerville in the Eastern Cape makes you wish you were at the wheel of a 1930s gangster getaway car instead of a dusty old bakkie. Even the intercom ritual at the gate smacks of a scene from The Great Gatsby:

"Jules and Chris from Karoo Space."

The golden cherubs on the gateposts look down with enigmatic smiles. They will not reveal the passwords. You wait. The creaking gate begins to slide open. You have been granted access to another world: the Bubble of Mark and Jacques.

Most of us, when we semi-grate to somewhere in the Karoo, come quietly. We don't exactly skulk around like guilty Jo'burg jollers, but we do try to fit in with the locals. It takes ever so long to crack a smile at the kerkbasaar.

And forget about the Inner Circle. You're always going to be in the Incomer Class. So you learn to embrace it. Besides, country living is really worth it.

But not Mark Hinds and Jacques Rabie. Oh no, they sailed into Steytlerville with fire, fury and a flash of style. They broke whatever unspoken rules the platteland had to offer, took over a tired old Art Deco hotel just outside the dorp limits, and much more than a decade later they're still adding shiny bits to their bubble.

Or is it their crazy cage, their La Cage aux Folles?

You hear about chaps who run away from home to join the circus and you think it's just a fable. Hinds is one of them in the flesh.

Here's an accomplished concert pianist who knows his instrument like a mother knows her children. He had been a valued member of the SABC National Youth Orchestra and an employee at a German piano firm.

"I learned all about the technical aspects of pianos," he says. "I can tune, restore and re-build a piano and that has stood me in very good stead."

So he falls in love with an Auguste clown called Conc. He then joins Conc as Cinc and they travel the world as a duo of magical, musical clowns. They take on cruise contracts all over the globe and return to Cape Town to start up their own "Dream Circus".

Push comes to shove and Conc and Cinc split up, professionally and personally. One night, Hinds is holding a merry soiree at his luxury apartment in De Waterkant district and it's time to play one of his specialties: My Way.

As he tinkles out the classic number, he hears a voice from the kitchen, where a large man is washing dishes and singing along. Hinds is furious and about to throw the impudent person out.

"Then I realised that his voice was pitch-perfect," he says. "Although he had had no training, he was a born natural."

Long story short: love affair ensues. They move in together and build up a cabaret act.

So let's return to that hotel.

FROM NAUGHTY TO NICE

Steytlerville village was built in a heavenly setting between the Groot Winterhoek mountains, the Baviaanskloof mountains and the Noorsveld, where the mohair-laden Angora goat is the star of a world-class natural fibre industry.

It was established by the Dutch Reformed Church and named after a popular Uitenhage dominee.

Once upon time, the valley was renowned for the brandy smouse from the Boland who used to haul their wagons up into these mountains with their barrels of Cape Smoke, flog lots of firewater to the rondtrekkers (nomadic herdsmen) and party up with them in a rather ferocious manner.

But when the town was established in 1876, the burghers pretty soon put a stop to all that and liquor was a local no-no for at least half a century.

In 1943 the Karroo Hotel was built in a flash of New Mexican Art Deco brilliance, just outside town limits, and the party was on again. The hotel changed hands many times, picked up a bit of a dodgy rep and was a derelict shell by the time Hinds and Rabie laid eyes on it. 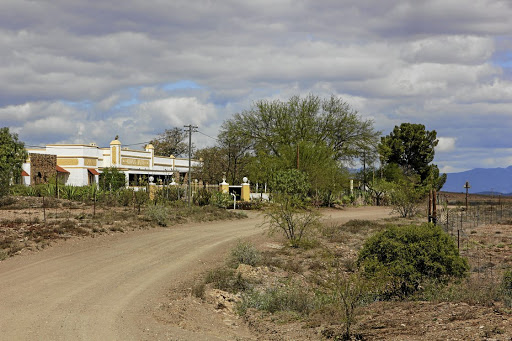 The wonders of the Karroo Theatrical Hotel await at the end of a dusty road.
Image: Chris Marais

They could, however, see the magic that lurked many, many expensive working hours away. As they were traipsing through the filth, dreaming through the knee-high trash, a bus pitched up and out streamed a clamour of tourists. They, too, seemed very keen on the place.

So Hinds and Rabie moved fast. They called the auctioneer, made a cash offer and the deal was done. They trekked in from where they had been living in Tulbagh ("where we just ended up drinking wine and counting cows," says Hinds) and went on a shopping expedition in Steytlerville.

"We bought one double bed. For two men to share. That, apparently, was bigger local news than the fact that the hotel had new owners," says Rabie.

The years passed. There were incidents and accidents along the way, but eventually everyone in and around Steytlerville came to relative peaceful terms with one another. The new guys in town were actually good guys. And the locals were not quite the ogres that fill the nightmares of city folk with preconceptions.

Steytlerville is, after all, a magical village. With its very wide streets and shady stoeps, it has become popular with a select group of passing travellers returning from their Baviaans adventures and, perhaps, heading off on a Karoo heartland road trip.

GET YOUR ACT TOGETHER

But how on earth were those fellows on the hill going to survive? They were just pouring their savings into the place and would the people come? It's not always beer, skittles and a Field of Dreams happy-ever-after story out here in the Karoo, where travelling feet through the door are relatively scarce.

Whoever Jacques Rabie was before he stepped onto the grounds of the newly named Karroo Theatrical Hotel has been eclipsed by his new, multi-layered self. Rabie has been on a personal journey most of us can only gawk at.

For a meaty pitstop on your next road trip, head to this Karoo restaudeli

One morning some time back, we're just finishing breakfast before embarking on an outdoor full costume shoot on a patch of Karoo veld just outside the hotel. Hinds is having coffee with us, already dressed in his suave, gold-trimmed smoking jacket.

We hear a strange click-clack sound approaching. Who or what can that be?

"It's a heavy-set dame in high heels, I think," says Hinds.

And there she is, Dame Leyla Lamborghini, stilettos and silver dress, plucking discontentedly at her bust.

"Look how loose it is. I'll have to take this in again," says Rabie in his new guise. Part of the New Jacques Rabie has been a massive loss of weight. He now slides easily into a size 34 pair of trousers.

What were you before?

"My dear, there was no size for me. Only blankets."

JACQUES OF ALL TRADES

Rabie, by day, is the maintenance manager at the Karroo Theatrical Hotel. He is, we often quip, the hardest-working Karoo cross-dresser we know. Fat has become muscle.

There isn't a roof leak he can't fix, nor a toilet he cannot unplug. The man is worth his weight in gold out here in splendid Karoo isolation, where sparkies and plumbers don't exactly fall out of trees.

After the sun begins to droop over the mountains, Rabie is the hotel chef. He runs the dinner menu, while Hinds is the front man and host.

And when the curtain goes up at the Grimaldi Theatre, Rabie takes on his third role as The Dame in the High Heels. But not before spending a bit of time in a little backstage dressing room, putting on the Ritz and the war paint in the company of two hivesworth of bees.

"I've only been stung once," says The Dame. "But it caused real makeup issues." The bees have since been relocated.

Together, Hinds at the grand piano (as Freddie Ferrari) and Rabie in full costume as Dame Leyla, they give a helluva Saturday night show.

It comes complete with song, dance, a musical bottles display by Hinds and a duet by Rabie and a puppet called Charlie.

"Yes, I'm a ventriloquist as well," sighs Rabie, as he totters off on his high heels to fix the pesky gate motor.

The Karroo Theatrical Hotel is on the outskirts of Steytlerville, 164km northwest of Port Elizabeth, 90km east of Willowmore.

The Steytlerville Follies cabaret show is held every Saturday night.

From R420 per person sharing a standard room. The "Saturday romantic getaway package" starts at R1,560 per couple in a standard room (R1,080 single) and includes accommodation, a sundowner cocktail, dinner, coffee and cheese, the cabaret show and breakfast.