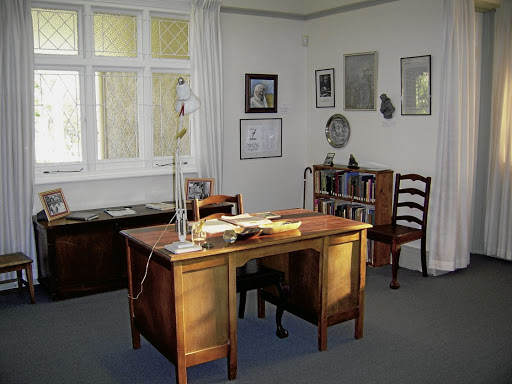 Lovers of literature can pop into Alan Paton's study while on the Pietermaritzburg literary trail.
Image: University of KZN Press

That KZN has the only active literary tourism project in the country must have greatly enhanced the bid to proclaim Durban a Unesco World City of Literature, the first on the African continent.

Literary tourism engages with writers and their real lives as well as the fictional settings that appear in their works.

It is a flourishing niche market in Europe and more prominently in the UK where it's often hard to avoid - Harry Potter's platform at King's Cross station in London, for example, or the George Inn, where you can have a pint in a pub that featured in Charles Dickens's Little Dorrit.

In South Africa it's a new initiative and most of the credit for what is available is due to Professor Lindy Stiebel, a UKZN academic who began a research project on KZN writers and writing in 2002.

"KZN Literary Tourism began as a five-year research project. Students received bursaries for their work on KZN writers and we built up an archive. We then created a website and loaded authors' profiles. My particular interest was literary maps so I began mapping out where and how writers were linked."

Initially the tourism aspect was "muted", she says, but grew almost organically.

"Who, after reading the lyrical opening sentences of Paton's famous book, Cry the Beloved Country, has not wanted to see the place in reality?" asks Stiebel.

Today, thanks to 15 years of research, synthesis, site visits and interviews, trails exist across the province; from Grey Street to Cato Manor; from Pietermaritzburg to the Midlands. There are also trails along the North Coast, the South Coast and in Inanda. 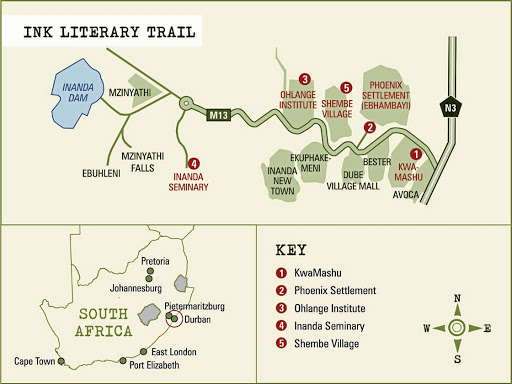 Some of these are self-guided. For others, tourists can hire a guide to walk them through a particular community. The first of these, and still one of the most popular, is the Grey Street Writers' trail.

Once the Indian-only trading area of the city, it reflects the heart and the history of South Africa's Indian population. The trail features writers Aziz Hassim, Phyllis Naidoo Fatima Meer, Ravi Govender and Imraan Coovadia, among others.

Stiebel says Grey Street is comparable to Sophiatown in Gauteng and District Six in Cape Town as an historic literary region - vibrant and multicultural.

She recalls researching the area. "We kept making a stopover at a shop that is included in a fictional short story, Flat 9, by writer Mariam Akabor. Eventually the caé owner asked: 'Why do you keep stopping here?' 'You are famous,' I told him. He loves it, especially now that the tours regularly stop here and everyone buys something."

Last week, Stiebel and her co-author, digital publishing specialist Niall McNulty, launched the culmination of decades of dogged determination in the form of a book, A Literary Guide to KwaZulu-Natal, published by UKZN Press.

Read it & don't weep: Durban is a Unesco City of Literature

"We wanted to put our work out in a more popular form. It can sit on a coffee table, or be carried around in a backpack," says Stiebel.

The guide is pictorially rich, filled with fascinating snippets of history and apposite quotes from writers' prose and poetry. It is area-specific, with a clear and comprehensible literary trail map for each area.

"It is a 'guide', because it is not exhaustive. It's a prompt for people to think about otherwriters in the province, " says Stiebel

There has been extensive overseas interest in the initiative; students from Lapland, tour groups from Germany and online visitors from Egypt.

But Stiebel says her biggest thrill is taking local people to places they had been nervous to visit.

"I take students - black and white - to Inanda and they love it. Through books and writers they feel at home in what was a foreign place.

"It is a reflection of our logo. A figure on a path holding an open book. Reading takes you on a metaphorical journey, and now you can get up and go on a real one."