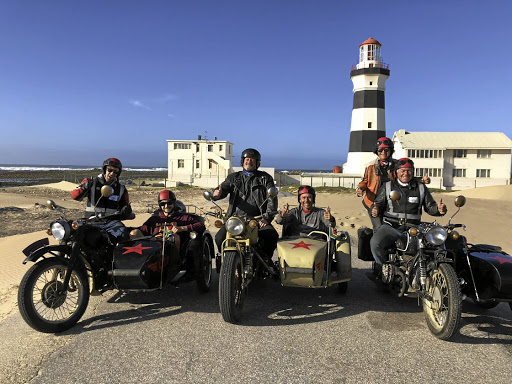 Being the owner of a much-loved 1966 Chang Jiang 750 Chinese People's Liberation Army sidecar rig, I was thrilled to be invited to participate in Cape Sidecar Adventures' exploratory overland trip, organised to promote similar tours that the company has just launched.

The mission was to start in Cape Town and roll to a stop in Port Elizabeth five days later - testing the sidecar "rigs", exploring the route and enjoying the company of as many people as possible along the way.

At noon, our posse of six participants met at the sidecar depot in Cape Town where I had been set up with the elegant 52-year-old "Kim", who was to be my three-wheel-chariot for the next week. "Maggie" and "Jacqui" completed the trio of bikes chosen for the trip.

A quick safety briefing and we were off down the road to Chapman's Peak via the Atlantic Seaboard to watch the sunset and quaff a glass of bubbly to celebrate the start of our intrepid adventure.

I wondered then whether there was a more beautiful stretch of coastline anywhere in the world. (I would discover, in the days ahead, that these jaw-dropping apparitions occur pretty regularly when touring this coastal road.)

At the "Chappies" layby, kids climbed over the bikes and dogs hurtled around. The sun slipped below the Atlantic and the elusive green flash marked the beginning of our adventure.

Onwards, then, to our overnight stop in Kommetjie, where I was told to "rest your boep on the stoep" and enjoy true South African hospitality with a braai and the finest red wine the Cape has to offer.

In Zen and the Art of Motorcycle Maintenance, Robert Pirsig writes: "In a car you watch the world go by on multiple screens. On a motorbike you are in the scene."

At sunrise we were astride our bikes and heading towards False Bay via Slangkop and the Misty Cliffs. After Scarborough, we crested the Redhill pass and looked down on False Bay and again I gasped in amazement at the vista.

We took Baden Powell Drive along the False Bay coast, a road so new it looked like it had been laid the day before. On through Gordon's Bay and then Clarence Drive, which Jeremy Clarkson once described as the most beautiful drive in the world.

I live in Shanghai, but my father grew up in Sydney and once told me he'd thought Australia had the most beautiful beaches until he'd visited SA. There's no better way to experience this beauty than on a bike.

After lunching in Hermanus, we headed to the N2, over the Breede River and past Swellendam, traversing wheat country.

As another glorious day drew to a close, a full moon rose, white and round like a thousand-year-old egg.

The Mossel Bay Backpackers is superb. It makes you wonder what itinerant kids on a budget could have to complain about.

Our first duty of the day was to collect representatives from Mossel Bay Tourism and go for a sightseeing jolly around town. On the way they told us about great white sharks, the (infamous) Buffalo Bike Rally (which the town hosts) and the vast Strandloper cave near the lighthouse.

Then we were back in the saddle for the long trek over the Robinson pass through the Outeniqua mountains in the direction of Oudtshoorn.

Travelling on such beautiful bikes brings one into contact with all sorts of admirers. Kids want to climb on them, men want to chat to you about their provenance and everyone just smiles and waves.

A puncture stop around noon forced us to pull over next to a small shop, where we were fed and watered while taking selfies in the sidecars. The kids climbed aboard for a short spin around the village, followed by their mums - in curlers.

In the late afternoon we rumbled into Oudtshoorn, whose ostriches once provided feathers for showgirls across the world. We were billeted at the Kleinplaas Holiday Resort - a heavenly sprawl of cabins under trees. That night we unwound by the fire, watching the stars and listening to the sounds of animals and the silver nomads in their caravans nearby.

Another beautiful day in Africa. First we met Corleen at the impressive tourist information centre and took some local press for a spin to the Safari Ostrich Ranch.

Ahead was a two-hour ride along Route 62 to Uniondale. We roared through the Klein Karoo and the low-torque, heavy sidecar bikes found their stride. Clad in just T-shirts and a warm wind, I had one of those magical moments you get on a motorbike when everything runs just right.

The Uniondale lunch stop introduced me to bobotie and fortified me for the serious part of the adventure - the 80 boneshaking kilometres of Prince Alfred's pass to Knysna.

Other than a very pleasant midway stop for adult beverages at Angie's G Spot [ now demolished by court order], the ride was punishing on both bikes and bikers. We arrived dusty and shattered in Knysna, thankful for a warm welcome at the Knysna River Club, where smart chalets are set among fig trees on terraces down to the Knysna Lagoon. Another beautiful place where I would have liked to idle.

The day dawned with cloudy skies and scattered showers. Oh well, everyone had told me Africa is not for the timid of heart. We met a group of enthusiastic people from the Knysna tourism office and drove up the Rheenendal Ramble, an old elephant track. We climbed and climbed and were reminded that, even on a very cool sidecar motorbike, you get wet when it rains.

We had breakfast at Totties Farm Kitchen amid piles of hardback books and walls hung with old doors. And then the sun came out. 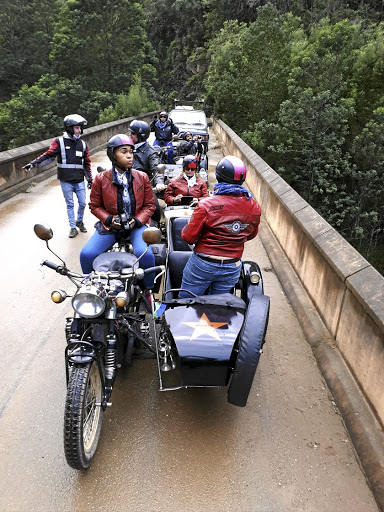 Replete and relieved, we continued on the undulating, twisting ramble, passing a glamorous lollipop lady with purple hair diverting traffic.

The day had run out on us and there was not enough time to ride the bikes to Port Elizabeth. Support vehicles were summoned, the bikes loaded on trailers and we shot off down the N2 until expressways and floodlit ports signalled our arrival in PE. "A small city with a big presence," as the locals like to say.

We started with a meet-and-greet with members of Nelson Mandela Bay Tourism, then we piled on the bikes and whizzed around the city to a running commentary from our passengers.

We headed for the Cape Recife lighthouse for photos and then back into the city centre where the bikes groaned up the steep road to the piazza in the Donkin district, where we gazed for a while at the extraordinary pyramid in which Governor Donkin may or may not have interred the embalmed heart of his wife, Elizabeth, after whom the city was named.

Finally we struck out eastwards to Leeuwenbosch Lodge on the Amakhala Game Reserve, where the owners and a huge Rhodesian ridgeback welcomed us before putting us in the care of a ranger for an enthusiastic game drive. We met herds of elephants, a tower of giraffes and an ugly of warthogs and the ranger's passion for the bush alone would have made the price of admission worthwhile.

Paul Ash shares the lessons he learnt while tackling the lonely mountain roads of the lowveld, from Joburg to Hazyview, on a Honda Africa Twin
Lifestyle
4 years ago

After the drive, lunch was served in the stately old homestead, where we lolled in the comfortable sofas on the wide shaded stoep.

This was a hard place to leave. But it was time to return to our normal lives.

We rode back to PE, where I gave "Kim" a last caress and thanked her for carrying me safely.

As I watched the bikes being loaded for the long haul back to Cape Town, I realised I was ready to mount up and do it all over again.

• Cape Sidecar Adventures has launched four new multi-day, self-drive overland adventures: go up the West Coast, into the winelands or spend 11 days rumbling up the Garden Route. The daily rate for the tailor-made guided tours is R2,500/driver.

SO, WHAT EXACTLY IS THE CJ?

Depending on who's telling it, the "CJ's" story is a good one, which starts when the Soviet Union "stole" a motorcycle factory from the Germans during World War 2. 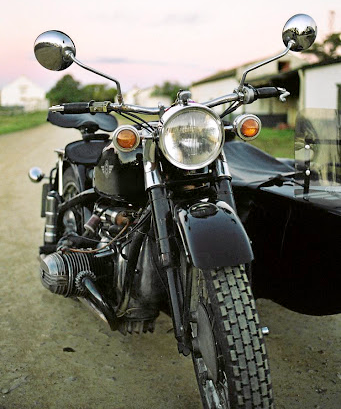 The Chang Jiang 750 is a copy of the Russian IMZ M-72 motorbike-and-sidecar combination - itself a knock-off of BMW's own R71 - which helped carry the Red Army to victory on the Eastern Front.

China acquired the tooling in the '50s and churned out thousands of these machines, which chugged away from Manchuria to the Gobi Desert. A rugged design, it was still widely used in the 21st century and many found their way out of China into private hands in the West.

Tim Clarke and his team at Cape Sidecar Adventures have restored a fleet of "CJs". It is on one of these bikes that you will tackle the quiet byways of the Winelands and Little Karoo, slow-paced territory where machines like this shine. - Paul Ash