Sick of the same old nights out in Jozi? Head underground for a secret dinner 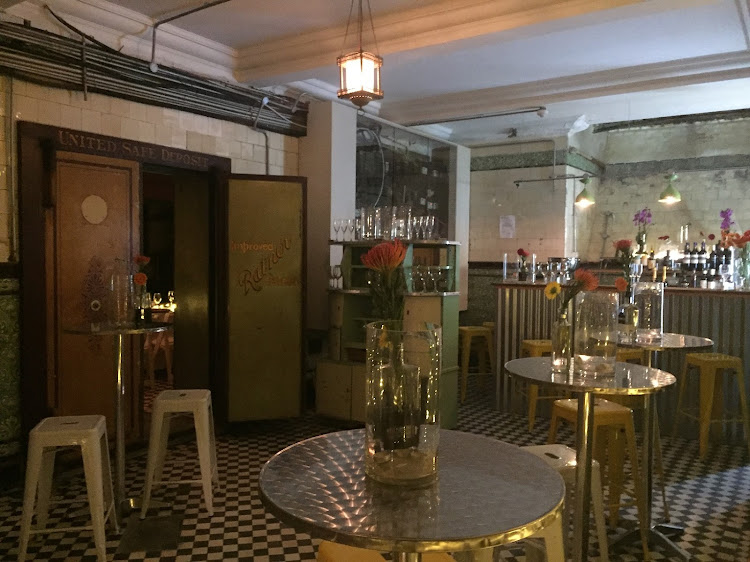 The vault inside Somerset House, which was originally built for the United Building Society (later Absa Bank), has been transformed into Zwipi Underground Bar.
Image: Supplied

When it comes to championing the beauty and wonder of Joburg’s inner city, few people are as passionate or driven as Gerald Garner.

As the founder and owner of Joburg Places, Gerald and his team have taken more than 20,000 people around the city on foot, introducing them to hidden gems and welcoming both locals and foreigners alike into what he considers to be the best city on earth.

Joburg Places recently acquired Somerset House, a historic building on Fox Street that used to be a bank building. They've reinvented it into Thunder Walker, a “traveller’s destination” that includes Zwipi Underground Bar, which is the setting of their new Safari & Secret Underground Dinners.

Unlike other exclusive dinners in Joburg, this one is about more than just great food (and the food is great!), it’s about fostering a love for the City of Gold that can grow and evolve over time – a love that Gerald himself clearly feels very deeply.

These evening tours begin at City Central on Commissioner Street, where you'll be treated to starters paired with either gin and tonic, or wine and port.

Next you head off on the “safari” section of the night: a walk from City Central to Thunder Walker. Along the way the Joburg Places team will teach you about the history and development of Joburg's inner city, stopping to share stories and point out noteworthy sights.

An undeniable highlight of the experience is when your first arrive at Thunder Walker following your walk. An unassuming, simple white door just off Ghandi Square is opened to reveal the most breathtaking of spaces, with original staircases, tiles, and panelling all revamped to their former glory.

But topping it all off are the original bank vaults and security box rooms, now home to Zwipi Underground Bar, where you'll enjoy a delicious meal surrounded by the glow of candles and fairy lights.

If you’re a lover of Joburg, are all about great food, or are just looking for an unusual way to spend a wonderful evening out, we can't recommend this more.

• The next Safari & Secret Underground Dinner is taking place on December 22. From January, the entire event will take place at Thunder Walker, but with a walking tour of the Gandhi Square precinct built into the experience. For more information, see joburgplaces.com/thunderwalker

This article is adapted from one originally published in the Sunday Times Neighbourhood: Property and Lifestyle guide. Visit Yourneighbourhood.co.za

Joburg gin bar Tonic now has a new wine-centric sister next door. Called Tanen, it's owned by the same team and is proving to be just as popular.
Lifestyle
3 years ago

Replacing The National, chef James Diack's new creation is a space where you can enjoy a drink with delicious French-inspired food as an added bonus
Lifestyle
3 years ago

The serene oasis that is Nirox Sculpture Park, near The Cradle of Humankind in Gauteng, has a new ace up its sleeve: a summer pop-up restaurant.
Lifestyle
3 years ago