180 years later: the day the lions returned to the Karoo

Samara Private Game Reserve near Graaff-Reinet recently released two lions into the reserve - the first of their kind in the area in almost two centuries. Nadine Dreyer was there for their first steps 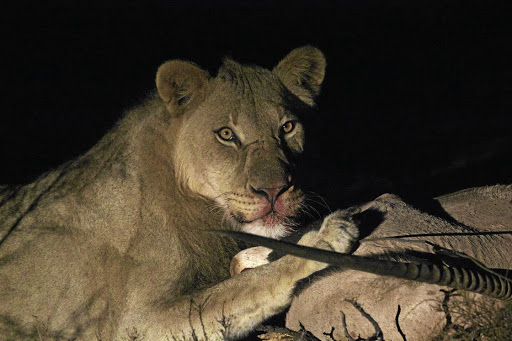 Titus gorges on a gemsbok carcass. He is one of two lions who now roam free on the plains of Camdeboo.
Image: Nadine Dreyer

The setting: Samara Private Game Reserve near Graaff- Reinet, surrounded by the Sneeuberg mountains and the plains of Camdeboo.

The occasion: The release of lions on the reserve, the first to roam free in this area for more than 180 years.

It was a clear Karoo morning and the excitement was palpable. The gates to the lion enclosure had been opened and rangers, conservationists and the media waited for them to make their grand appearance.

Except these lions weren't budging.

Although Titus, a three-year-old male, and Sikeleli, a four-year-old female, had been in their enclosure for five weeks, they were not remotely tempted by the gemsbok carcass strategically positioned outside the gates.

They remained fast asleep under the shade of a thorn bush in the blazing Karoo heat, even though they had not eaten for four days. Typical big cats, not willing to dance to any tune but their own. 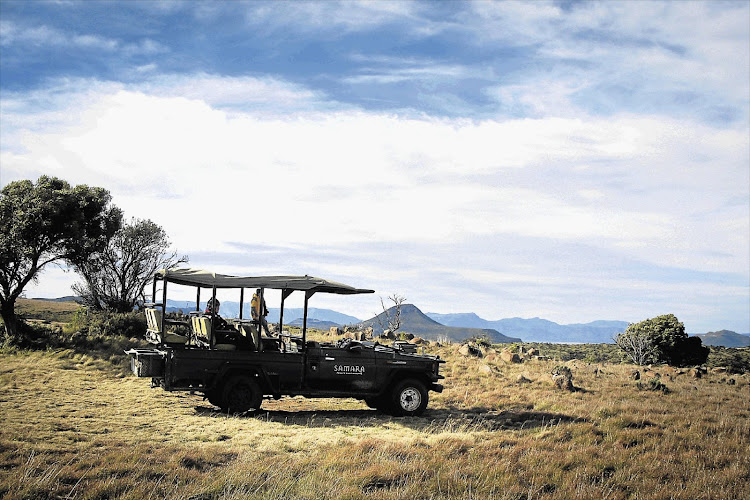 Among those watching on the game drive vehicles was Sarah Tompkins, the owner of Samara. Born in South Africa but now based in London with her husband Mark, Sarah tells the story of how when she first set eyes on the Karoo she vowed she would never buy an inch of the place.

But this is a land that slowly reveals it charms. The austere landscape glows with reds and ochres in the magic light of dusk and dawn.

The Sneeuberg Mountains are so ethereal that they virtually disappear in the midday shimmer, but are also grand and forbidding.

Thirteen giraffes have been successfully introduced into Malawi's Majete Wildlife Reserve, marking the first-ever introduction of this species into ...
Lifestyle
3 years ago

Sarah and Mark fell in love with the Karoo and bought their first property in the area, a livestock farm, with the vision to restore a vast tract of land to its former self, to a time before settlers and explorers ravaged the land. They bought 10 other farms to form an area 28,300ha in size and Samara was born in 1997.

For the first 10 years, the Tomkinses did nothing, allowing the land to rest and return to its former self. Looking from the top of a mountain onto the plains of Camdeboo, I imagine this place 200 years ago, when the Karoo was very different.

Explorers who ventured into the "Great Dryness" in the 18th and 19th centuries documented their travels here. One of the most eccentric characters was 28-year-old ornithologist Francois Le Vaillant, who travelled around South Africa extensively from 1781 to 1784 with a large contingent in three ox wagons.

Le Vaillant camped on what is now the southern section of Samara. He carried enough clothing and linen to allow him to change three times a day. Every evening he would dress up in his finest rags and enjoy a four-course dinner by candlelight with silver cutlery.

His fellow travellers included Kees the baboon, who very conveniently also served as a taster. A cockerel acted as his alarm. (Le Vaillant blotted his copybook somewhat by adding fake specimens to his collection of 2,000. These bogus birds were later found to be made up of parts of different species.)

Le Vaillant wrote that he dared not travel at night because of the ferocity of the Cape lion, a large, black-maned subspecies. Today the Cape lion is extinct. The last one recorded in the area was shot by a hunter near the settlement of Leeu-Gamka in 1842.

In those days, a million springbok would gather in a single herd 5km wide, leaving clouds of dust during their migration across the Karoo. Travellers say it would take two weeks for the dust to settle.

Slowly animals that occurred naturally in the area have been reintroduced on Samara. Springbok, red hartebeest and eland graze across the veld and the Samara Mara, a grassy plateau on the top of a mountain.

The Tomkinses share a dream with other conservationists in the area to link all the local game reserves through a series of corridors to create SA's third-largest protected area.

Samara's most famous success so far is their cheetah project and Sibella, the legendary matriarch. Born in the North West, she was savaged by hunting dogs, who tore off all the flesh on her hind legs. She was also beaten and locked in a cage. The story of her rescue and relocation to Samara has featured in many magazines and documentaries. She became the first cheetah back in the Karoo in 125 years, and her offspring contribute 2.4% to the wild cheetah population in SA. (She died of natural causes in 2015, at the ripe age of 14).

We walk into the bush to see the latest of her offspring, Chilli, and her litter of five cubs, now three-and-a-half months old. Chilli and her kids are more habituated to humans than one would normally find in the wild and we are able to get close. Chilli wears a tracking collar so her movements can be monitored at all times.

The San inhabited Samara's hills until the late 19th century. "Karoo" is an ancient San name meaning "Land of Great Thirst". Ironically a San painting on the property depicts the only known work of a cheetah.

We spot a white rhino and her juvenile on the plains and are able to get within 10m of them on foot, a heart-stopping experience. All Samara rhino have been dehorned to discourage poachers.

The reserve boasts a string of firsts. An elephant grazes at the foot of the Sneeuberg mountains, one of two bulls who were brought from Phinda in KwaZulu-Natal in November last year to join a small family herd. Samara is located on an ancient elephant migratory route and these elephants are the first to roam free on the plains of Camdeboo for 150 years.

Nadine Dreyer finds a constantly unfolding drama of creatures and the finest camps she has ever seen, at two Nasikia camps in the Serengeti, in ...
Lifestyle
3 years ago

In the meantime the lions have been thoroughly obdurate all day, refusing to budge.

That night, after a main course of venison fillet at the very swanky Manor Lodge, a lodge staff member makes a dramatic announcement. One of the rangers has radioed in to announce that the lions have left their enclosure at last.

We clamber onto a game-drive vehicle and set off into the dark. We spot Sikeleli exploring the veld but she soon returns to the carcass. Shortly, she is joined by Titus and they devour the gemsbok together. 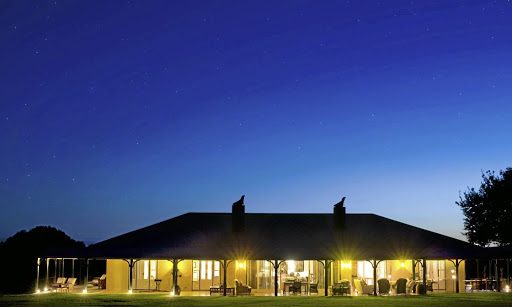 In the end, their walk to freedom is much more dramatic than the one we humans had planned: they emerge at night, when lions are at their most frightening and powerful.

Samara is a luxury game lodge three-and-a-half hours from Port Elizabeth and 50km from Graaff-Reinet. With the introduction of lions this month it is now a big-five reserve.

Karoo Lodge, above, sleeps 18 in a renovated 1800s farmstead with large verandahs and comfortable rooms surrounded by the Sneeuberg mountains.

The ultra-luxurious Manor sleeps eight and can be rented for families and small groups. The decor can best be described as "traditional African with a cutting-edge reinterpretation".

• Dreyer was a guest of Samara.

Botswana safari with a twist: you helicopter in & paddle a canoe out

The four-day Selinda Adventure Trail takes you deep into the Botswana bush, for a safari like no other, writes Vanessa Stephen
Lifestyle
3 years ago

Sensational sand dunes, supermodel seals and a game-packed national park you can see from space ... these are just some of the many reasons you must ...
Lifestyle
3 years ago

Witnessing a stampede of wildebeests is always an impressive sight, even more so when you get to see it from the sky.
Lifestyle
3 years ago