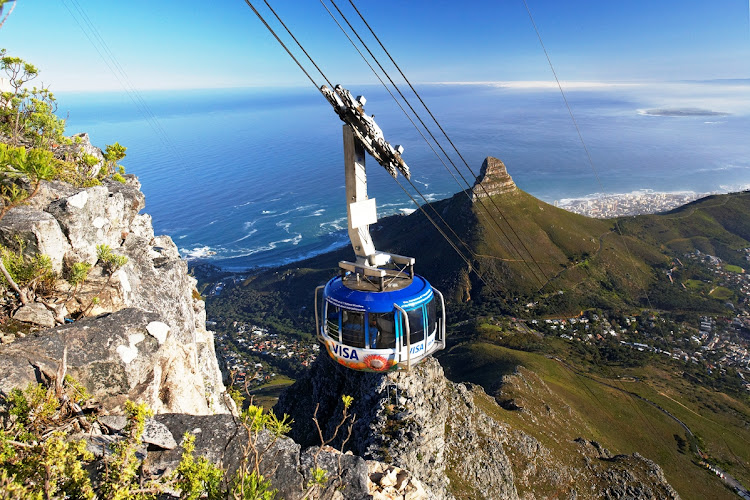 By any measure, tourism in SA is holding its own. It accounts for 726,000 direct jobs, with a total of 1.5m including indirect jobs in downstream services such as food supply, retail and security.

But that’s a fraction of what it could be. SA attracted 10.5m visitors last year, roughly three times the figure in 1994, and roughly 18% of the country's population of 57m.

While these figures are trending in the right direction, the potential is much greater. The UK generates roughly 10% of its GDP from tourism, and Egypt and Mauritius 11% each. What is encouraging is the number of repeat visitors to SA: 82% of last year ’s 10.5m tourists had been here before. This is particularly true of African visitors, of which 94% were repeaters. Some 43% of the 2.7m overseas tourists were repeat visitors. 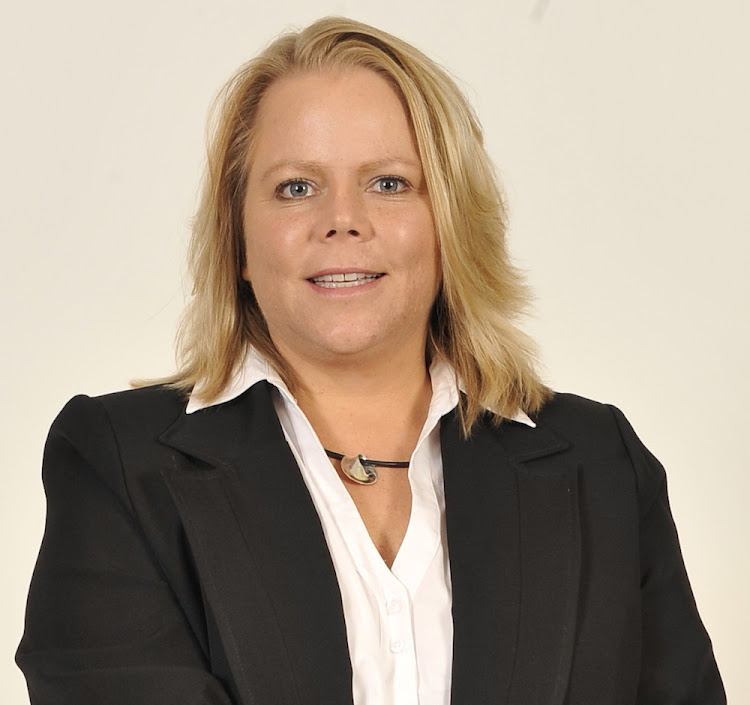 SA is firmly on the global tourism map, banking a string of accolades for some of the world’s most fetching attractions, such as Table Mountain, the wine route, Garden route and Kruger National Park. No global traveller worthy of the title can claim to have seen the world and missed these sights. What has changed over the past 25 years is a massive upgrade in tourism infrastructure and some brilliant marketing by SA Tourism and private operators.

“Cape Town in particular has done a superb job in marketing itself to the world,” says Lee-Anne Bac, director of advisory at professional services firm BDO.

“Our country’s strong conservation ethos, world-class game reserves and an array of private game lodges —many of which are international trend-setters — are attracting a growing number of visitors each year.”

Bac says SA’s tourism sector is particularly adept at reinventing itself and coming up with new concepts to attract visitors. “Contrary to what many people sometimes think, our service is top quality and we are known as a friendly and hospitable destination, which is not always the case when you visit some of the more trafficked tourism destinations elsewhere in the world.”

Another bonus for foreign visitors is the weak rand. For the price of a 3-star hotel in London, they can purchase a 4- or 5-star hotel in SA, though even here there are signs that local tariffs are edging towards international norms.

What’s also changed in the past 25 years is the number of hotel rooms. In 2009, a government national survey found there were 1,562 hotels across the country. Independent tourism adviser Gillian Saunders estimates that this figure has grown to 1,950 since then. According to StatsSA there were just over 3,000 hotels “or similar” in SA last year, a figure which includes guest houses. The Tourism Grading Council puts the number of hotels at 841, but this is certainly an under-count. 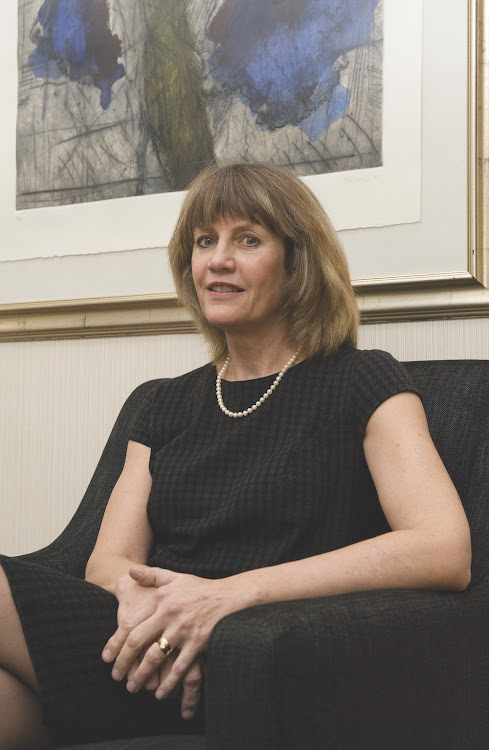 Tourism in SA is on the rise. The big spenders are those who come from overseas, for which SA is a long-haul destination. Getting to SA requires some serious planning if you live in Australia, Europe or the US.

This explains why visitors from neighbouring African countries account for the lion’s share of tourist arrivals, though there has long been debate as to how to account for these visitors, since many are visiting family and friends and by-pass most of SA’s tourism infrastructure.

As such, a large percentage of these visitors from neighbouring countries make little contribution to local tourism.

Given the size of SA and the richness of its tourism infrastructure, there is potential to double the number of visitors and create another 2m jobs by 2030. Tshifhiwa Tshivhengwa, CEO of Tourism Business Council of SA, says one of the obvious ways to expand the sector is to remove some of the self-imposed obstacles, such as the tortuous visa application process for Chinese and Indian visitors.

“Last year we attracted a little over 90,000 visitors from China and India, which is a fraction of a percent from two of the fastest growing outward bound tourism markets in the world,” he says. “We can easily increase these figures by making it easier to apply for visas.” 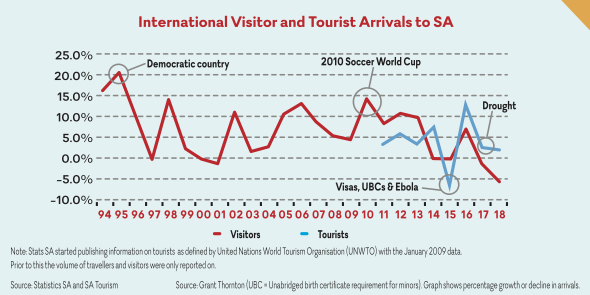 Number of international and tourist arrivals to SA
Image: Supplied/SA Tourism Board 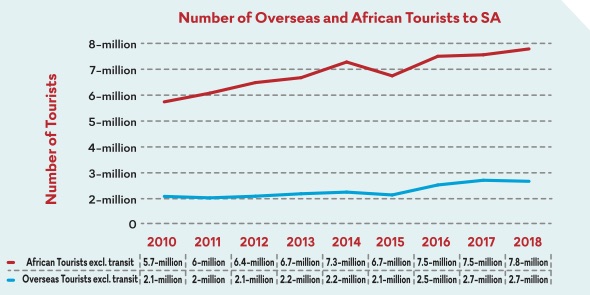 Number of overseas and African tourists to SA.
Image: Supplied/SA Tourism Board

In 2015 former home affairs minister Malusi Gigaba decided that Chinese visitors applying for SA travel visas should present themselves in person at one of two SA consulate offices in China. That own-goal wiped more than R1bn off tourism income for 2015.

Last year, home affairs expanded its visa waiver programme to Russia (but not China and India) and most southern African countries. Most of the top 10 tourism markets – including the US, UK, Germany, France, Netherlands, Brazil, Australia and Canada –were already exempted from having to obtain visas to visit SA.

Another relaxation recently announced was the lifting of requirements for two parents visiting SA to carry birth certificates for their children. It is perhaps understandable that visitors from China and India are still required to obtain visas, given the need to combat illegal immigration. But tourism experts believe there are simpler ways to police this traffic while still allowing easier access.

Australia, by way of comparison, attracted 1.4m visitors from China last year, against fewer than 100,000 for SA. This is a problem that has been solved by most other countries eager for visitors from Asia.

Even Vietnam, always hungry for visitors, has an online visa application system. SA had plans to pilot a similar system in April this year, which should go some way to smoothing out crimps in the system, but our record of innovation in this regard falls well behind those of other countries.

Chinese and Indian visitors no longer have to appear in person at consulate offices when applying for visas and can use courier services. For these markets, visas should now be issued within five days of application.

By 2030, the number of outbound tourists from China is expected to top 300m. If SA were to capture just 1% of this, or 3m, it would have a huge impact on the local tourism sector. 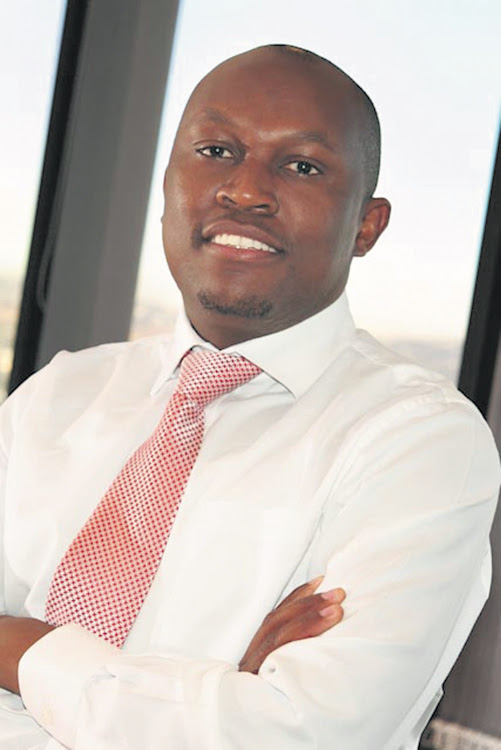 Tshivhengwa says it is encouraging that President Cyril Ramaphosa is fully on board with the plan to grow tourism and create jobs. Finance minister Tito Mboweni, a former chairperson of the Tourism Business Council of SA, made mention of the need to boost the sector in his latest budget speech.

The CEO of the SA Institute of Business Accountants, Nicolaas van Wyk, has long campaigned for a concerted push behind tourism as a way to kick-start other areas of the economy.

“If we get tourism going, which we can do with relatively little extra effort, we will then start to see the spin-off in terms of manufacturing and retailing. We get way more bang for our buck if we concentrate on tourism as a national priority,” he says.

What would help is having another major international event like the Soccer World Cup to accelerate new investment in road and tourist infrastructure. The 2010 Soccer World Cup was a milestone event for SA tourism, achieving unprecedented global attention, and a more or less steady rise in visitors since then. A similar event is what is needed, says Bac.

Saunders agrees that some of the issues inhibiting tourism growth are easily resolved – such as a simpler visa application process, which is being addressed.

Other inhibitors are more problematic. “People overseas read about expropriation of land without compensation, high crime rates, corruption and state capture. This does not present a friendly image of the country,” says Saunders.

What’s needed is lots of tourists visiting for a host of reasons – business, leisure, events, conferences, visiting friends and relatives, and travelling to all corners of our country and spending across a wide range of different experiences, says Bac. 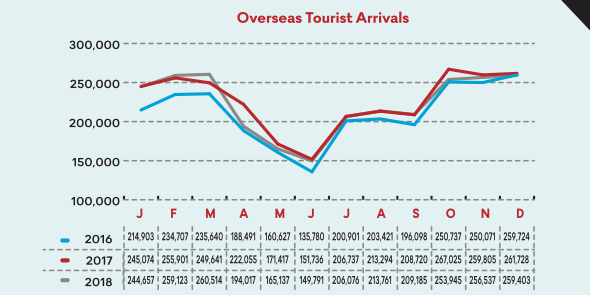 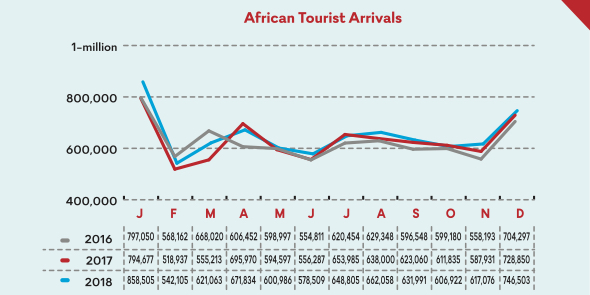 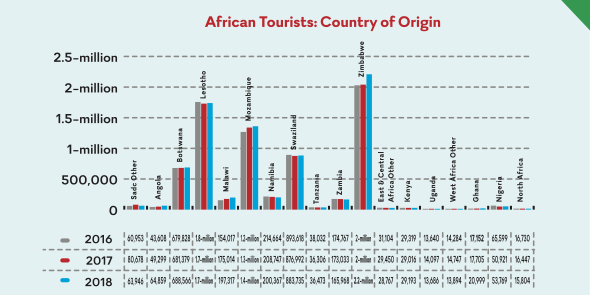 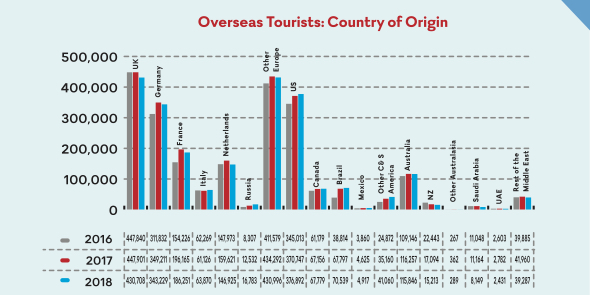 This article was paid for by the South African Tourism Board.

Changing the game in the fight against poaching