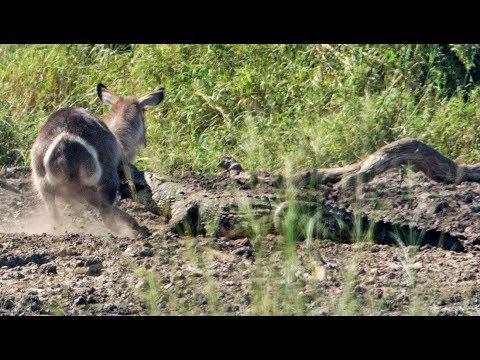 A waterbuck learnt a tough lesson about lying down next to a crocodile-infested dam.

Mike Johnson, a 73-year-old retiree, recorded an epic battle for survival when a crocodile grabbed a waterbuck's leg at a waterhole in the Kruger National Park. The footage shows the antelope repeatedly kicking the crocodile and then escaping when the reptile loosens its grip.

"There was a splash at the far end of the dam. Thinking it was hippo, we did not pay much attention to it at first, but a group of waterbuck appeared agitated, and we saw that one was struggling with something," Johnson told Latest Sightings. "... the crocodile was trying to pull the buck back into the water.

"After a short breather, the waterbuck then made a break for it when the crocodile changed its grip. The buck managed to hobble away but had a broken front leg."

It was a bittersweet moment for Johnson.

"We were excited to see the battle for survival but at the same time sad to see the waterbuck immobilised."