The Greek isle has long drawn a chic clique, but the influx of billionaires has made it a haven of absurd luxury 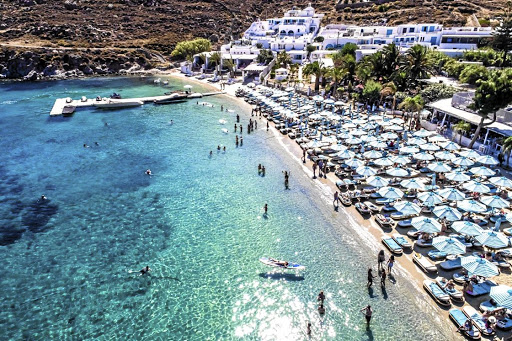 Nammos, a hip and exclusive restaurant and beach bar on the Greek island of Mykonos, is a destination of choice for some of the world's wealthiest and most famous people.
Image: greekcitytimes.com

"Ha ha, no," says Anna, a smartly dressed hostess welcoming guests to Nammos beach club, when I pop by to ask if there is anywhere to buy a lilo or other traditional seaside paraphernalia. "Our clients aren't usually those sorts of people."

Nammos is a destination of choice for some of the world's wealthiest and most famous people - from Kate Moss, Lindsay Lohan and Ariana Grande to Philip Green, Wayne Rooney and Usain Bolt.

Their spending has upended the local community, transforming it from a fishing village into "Kings Road-on-Sea".

Anna tells me that, unfortunately, I can't stop in for dinner, as bookings are required weeks in advance. It's probably for the best, as a plate of sea bass sashimi would have set me back €200 (R3,300).

An attempt to have a beer at the bar - where all the customers, young and old, are dancing on the tables to thumping R&B - is thwarted by a team of six security guards in black polo shirts and shorts.

It's like a normal restaurant until 6pm. Then the party starts, every night. People spend huge amounts - R800k to R1.6m isn't unusual

That's more than George, who is from Athens and is on Mykonos for the summer, sharing a small apartment with five others, will make in 10 seasons.

George's job is to prevent anyone who hasn't shelled out from joining the party, and to keep those enjoying themselves from unwanted attention. But attracting attention and flaunting your wealth appears to be one of the main reasons to visit Nammos, which sits on Psarou Bay, a 15-minute drive south of Mykonos town.

Tonight, George is guarding the table of Australian YouTube influencer Shani Grimmond, whose 1.4-million followers are frequently treated to shots of her in swimwear in exactly this sort of location.

Green's partying came soon after BHS, the department store he'd sold for £1, collapsed with the loss of 11,000 jobs.

Others papped at the bar or included in the 113-page Nammos magazine include racing driver Lewis Hamilton, models Bella Hadid and Heidi Klum, singer Nicole Scherzinger and actor Leonardo DiCaprio. 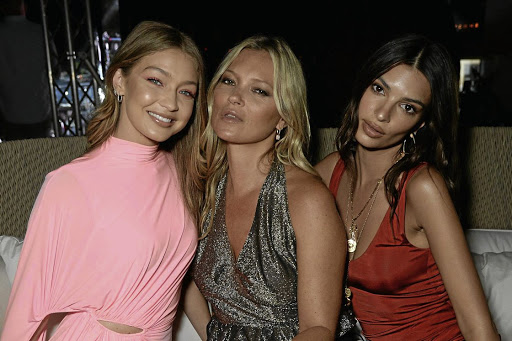 Mykonos has been attracting tourists since the 1920s, when archaeologists and antiquity hunters used it as a base to visit the ancient Greek ruins on neighbouring Delos.

It came of age in the '60s when the former US first lady Jackie Kennedy Onassis visited with her second husband, the shipping tycoon Aristotle Onassis. Following her lead came Grace Kelly, Brigitte Bardot and Sophia Loren. There are two bars and a hotel dedicated to Jackie O on the island.

As is often the case, where the celebrities go, the super-rich follow. Psarou Bay, on which Nammos sits, proved particularly popular because it is a natural deepwater harbour protected from the notorious meltemi north winds.

It is thus a perfect spot for billionaires to moor their superyachts. There are 11 of them at anchor when I visit, including the Maltese Falcon, a $300m (R4.4bn) superyacht built for the Silicon Valley venture capitalist Tom Perkins.

The six-cabin yacht is available to charter for €480,000 (R8m) a week including jet skis and water jet packs. It has reportedly been hired by Google's co-founder Larry Page and the actors Tom Hanks and Hugh Jackman.

For those without sea legs, Nammos offers a private heliport a few hundred metres inland. If you don't have your own helicopter, chartering one for the 35-minute journey to Athens will set you back €3,500 (R58,500). 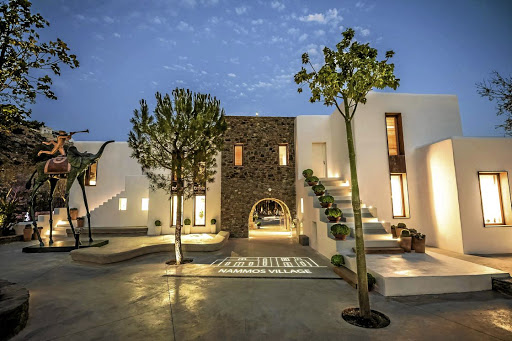 Seeing how much money visitors were dropping at the restaurant and beach bar, Nammos's owners expanded into luxury shopping.

They transformed the land behind the bar into Nammos Village, an enclave of 20 luxury boutiques. Kate Moss DJed at the opening party last year. In the Dior store, tops emblazoned with "J'Adior Mykonos" sell for €1,200 (R20,000).

As well as the Gucci, Burberry and Louis Vuitton stores, there's the Eden art gallery, where works by the graffiti artist Alec Monopoly cost more than €200,000 (R3.3m). Monopoly (not his real name; he wears a bandana at all times to conceal his identity) and his gallery clearly know their audience.

"In Nammos, pretty much every person who comes in here can buy everything," says the gallerist, Akaash Mehta. "That's what this place was engineered for."

The first work seen upon entering depicts the banker from Monopoly at the helm of a yacht with Disney's Scrooge McDuck in the background. The price is €250,000 (R4.1m). Other works include a giant black and silver American Express credit card embossed with "Your Name Here".

There are no fishermen left in Nammos; they have all sold out to property developers, according to staff at the bar and elsewhere.

In Nammos, pretty much every person who comes in here can buy everything.That's what this place was engineered for

It's not the only place on the island to have been transformed to meet the demands of the super-rich.

In 2015, German friends Thomas Heyne and Mario Hertel bought Scorpios bar on a promontory across the bay from Nammos and set about transforming it into another super-luxury party destination, also offering wellness activities including yoga and psychedelic breathing classes.

Elena, one of three Scorpios hostesses welcoming guests who arrive by road (the others are stationed on the jetty to welcome those arriving by sea) says that unfortunately I've missed the big parties, which are on Tuesdays, Thursdays and Sundays. "There can be a line out there of 2,000 to 3,000 people," she says.

Famous faces are regularly spotted at Scorpios, but Elena doesn't always recognise them.

"We had Gigi Hadid here, but I didn't know who she was. The restaurant was closing and I said: 'If you're ready and know what you want to order, then OK.' Afterwards, the other girls said: 'Elena, it's Gigi Hadid. She can have dinner whenever she wants.'"

Scorpios proved such a hit with London's arts and media set that this year the private members' club Soho House bought it in a deal that included the 40-room San Giorgio hotel next door. The sale price was not disclosed.

The Scorpios lounge, waiting for the right mix of locals, internationals, and you. #scorpiosmykonos

One of Scorpios' top DJs, Jean Claude Ades, commutes to Mykonos from his home on Ibiza on a new private-jet-sharing service launched by Canadian billionaire and Uber co-founder Garrett Camp.

Aero's Jaimee Zullo says the company created the route after clubbers complained of the difficulty of travelling between the two party islands, which normally requires a change of planes and can take hours.

Every day during the peak season in August, more than 200 planes, including a significant number of private jets, take off or land at the airport.

Alexander Zinell, the boss of the airport operator Fraport Greece, says the airport overhaul will include two new VIP lounges when it opens in 2021.

For those without their own superyacht, sleeping options include five-star hotels or ultra-luxurious villas, one of which - Villa Tamarisk - is available to rent for more than £1m (R16m) a month.

Roi Deldimou, manager of the Mykonos branch of the London luxury estate agent Beauchamp Estates, says the villa is the biggest private house on Mykonos, at 1,400m². Size is important for rich clients, as "billionaires are used to living in big houses and it can be very hard to confine them in small villas".

Some locals complain that the influx of wealthy holidaymakers has pushed up the prices of all homes on the island, making it difficult to find an affordable place to live. Nick, who works for a car-rental company, says his rent on a small house inland has risen from €400 to €600 (R6,600 to R10,000) a month, which he says is two or three times the Greek average.

"There have been tourists coming here for ever, but there are a lot more now and they are a lot richer and spend a lot of money. Local people want some of it, so they put their places on Airbnb, which means there are fewer houses for us to rent and the prices are going up."

On the other hand, he says "the pay is also much higher in Mykonos. The tourists have caused the prices to rise, but they have also created a lot of jobs that pay well."

Many of the staff working in the bars, restaurants and hotels have relocated here for the season.

Some are from mainland Greece, where the youth unemployment rate is 40%, but word of the money to be made on Mykonos has travelled far and wide.

Yazar Abbsa, 18, has come from Pakistan to sell clothes on the beach in the day and clean cars and learn English and Greek in the evenings.

"There's a lot more money to be made here than in Pakistan or in Athens," Abbsa says as he waits for a lift to Super Paradise beach from Ano Mera, the inland town where seasonal workers live, often in dormitory-like conditions.

"It's hard working here, but it's better than anywhere else I've tried." - The Guardian

Up to R89k per night: inside SA’s swankiest hotel rooms

Where do celebs, sheikhs and presidents stay when they visit SA? The presidential suite, of course. Elizabeth Sleith looks at some of the super ...
Lifestyle
4 years ago

Wealthy jet-setters own all the best vintage vehicles. And, they relish the chance to show them off at the annual Concorso d'Eleganza Villa d'Este in ...
Lifestyle
2 years ago