By paul ash AND Paul Ash 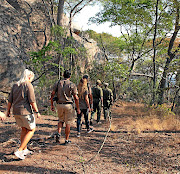 In the freezing spring of 1945, when the South African 6th Armoured Division was hunkered down on the banks of the Po River in Northern Italy, a gunner watched the cold, green waters of the river swirl by and made a promise that if he survived the war and went home to Africa, he would take a long canoe journey down a wild river.

The gunner kept his promise. In 1946, he returned to Pietermaritzburg and after a few dramatic lessons in navigating a 50kg wood-and-canvas boat down a shallow, rock-strewn waterway, he and a friend paddled it to the sea.

His name was Ian Player. That journey lit a fire in him which eventually led to work as a game-ranger in the great Umfolozi Game Reserve, where he learnt about the healing power of wilderness. Later, when he took people into the bush on walking trails, everyone would take turns keeping watch by the fire at night.

"There are rhino here, lion and elephant," he said. "You have to look after the people who are asleep. You've got to be the eyes and ears." It was more than just keeping the fire going, though. "When you look into the fire, take a look at yourself," he told me the last time we spoke.

Player was on my mind last month as I flew northwards in a glossy-black Cessna Centurion, flitting across Zimbabwe's parched earth. Up front, pilot Russell Ashley-Cooper was busy on the radios while Rusty Labuschagne, executive director of Pathfinders Africa, flew the plane.

I had met both men just an hour before at Lanseria airport. Labuschagne had lots of baggage. Disposable nappies, mostly. "For my grandson in Bulawayo," he said.

"Not because of my flying, then?" said the pilot.

We were three tall guys with a lot of gear between us. Centurions are not famous for their roominess and there would be turbulence en route. I figured the nappies might come in handy after all.

The trip was an introduction to Pathfinders Africa's work - taking stressed people such as executives, lawyers and journalists into the bush to learn about animals, plants and birds and the way the stars move through the night sky.

We've lost sight of the value of nature. It's all about numbers now. Everyone has a target

Over four days we would fly to four of the country's wild areas - the Bubiana Conservancy, Victoria Falls, and the Hwange and Chizarira national parks. Each is a different biome, which is vital experience for the budding rangers.

"It's, like, here there are lots of scorpions, or this place is where these birds are," said Labuschagne.

Going to the wilderness is a chance to find that thing we have lost, which is a connection to nature. It's not just a course for wannabe game rangers but everyone.

"We've lost sight of the value of nature," said Labuschagne. "It's all about numbers now. Everyone has a target. Meanwhile we're destroying habitat and we have to realise that that is the most important thing."

Labuschagne knows the importance of the wild and of being in a quiet place. He spent 10 years in Zimbabwe's worst prisons, stitched up for a crime that never happened. He was accused of drowning a fish poacher on a river that flows into Lake Kariba.

After a trial notable for its lack of police evidence - or a body - he was jailed in the country's worst maximum security prisons, first Khami and then the notorious Chikurubi.

For someone who had spent most of his life in the bush, being locked up was the worst thing anyone could have done to him.

At Khami he shared a cell with 77 other men. Each man had 33cm to call his own. They slept "packed like sardines with legs intertwined in the middle", he writes in his harrowing book Beating Chains. "We all faced the same direction, when you turned over, it was all together."

'Beating Chains' is Rusty Labuschagne's book about 10 years of his life that were both lost, and not lost. Most of it was written in prison on a smuggled cellphone, an action that caused a lot of trouble for him. Labuschagne is now a motivational speaker, who offers profound lessons in humility and resilience. You can find a copy at beatingchains.com.

The prisoners suffered disease, malnutrition, thirst and casual brutality from the guards. Beatings - with truncheons on the soles of the feet - were regular. Men died of starvation and cholera, or simply lost the will to live.

For three years at Chikurubi, the daily water ration - for washing and drinking - was a single cup of muddy, orange water brought in drums from a nearby dam.

Of all the things Labuschagne endured, he most missed the peace of the bush.

"In prison it's so loud and full of unruly people," he said. "The bush has a natural rawness. In prison it's the exact opposite."

When he was released in 2013, one of the first things he did was pack some fishing rods and head off to Mana Pools on the Zambezi with friends.

"Mana Pools is a wildlife haven," he said. It was more than just being back in the bush, though. "One of the things you miss in prison are friends and relationships. There's so much value that's lost in friendship these days because of how we live."

We stopped in Bulawayo to clear immigration and flew on to Gweru to fetch two more of the Pathfinders crew and spend the night. In the morning, we flew to the Bubiana Conservancy near West Nicholson, not far from Matobo National Park and its towering granite koppies.

The people who lived here thought it a sacred place. Mzilikazi, who founded the amaNdebele kingdom, is buried nearby. So is Cecil John Rhodes.

The granite outcrops cast long shadows in the morning light as we floated down to Earth.

The 50,000ha conservancy has had a hard time of it in the country's recent economic turmoil. Land invasions have reduced the number of farms, while hungry poachers have hammered the wildlife.

Still, as we drove off the airstrip, a large male cheetah gazed at us through the boundary fence before loping off through the trees.

The farm, owned by the Drummond family, is spectacular. Rolling bush and rocky hills, full of leopards.

A river runs lazily past the camp where the guides will be based for part of their course. Standing on the deck overlooking the river, at the very moment I could think of no other place that I would rather have been.

But time was short. We ate home-made chicken pies on the deck, then it was back to the plane and off to Hwange. You can cover a lot of ground in a day in a Centurion.

Image: wonderfulzimbabwe.com The landscape in much of southern Zimbabwe is defined by granite outcrops and balancing rocks such as these formations in the Matobo National Park.

Nightfall found us at the gloriously retro Hwange Safari Lodge, after a quick visit to Ganda Lodge, where elephants had gathered at the waterhole in front of the camp.

We were airborne just after dawn, heading northeast now to Chizarira National Park. Perched on the Zambezi escarpment, the park is one of Zimbabwe's great places, full of leopard, lion, buffalo, elephant and antelope.

Yet it's off the radar of most travellers. That might be because it is a tough place to get to (if you don't have a Centurion) and its ruggedness when you do. The steep escarpment is incised with deep gorges cut by rivers flowing to the Zambezi.

We toured the rebuilt camp where the trainee rangers will live, then took a quick drive to a campsite perched on the very edge of the escarpment itself.

As we sat there, feeling a warm breeze flowing up from the valley far below, an eagle soared past on a thermal, and made a few passes with barely a ripple in its feathers.

Labuschagne watched it, a broad smile on his face. Freedom comes in many forms.

Training takes place in four of Zimbabwe's most iconic wilderness areas, allowing participants to experience a variety of biomes and scenarios.

The course is an ideal introduction and qualification for anyone interested in working in the guiding, lodge management or conservation fields, particularly those who want to kick off their career with a broader experience of guiding scenarios.

Those who love the outdoors and the African bushveld but who are not looking to make a career of it can opt for the FGASA-endorsed 14-day Nature Enthusiast course, which is run from a private safari park in Victoria Falls.

The short course offers training at professional level in aspects such as ecology, animal behaviour and bush survival and is ideal for anyone looking to learn more about the natural world.

• Paul Ash was a guest of Pathfinders Africa.