WATCH | Spot the odd one out: polka-dotted baby zebra snapped in Kenya 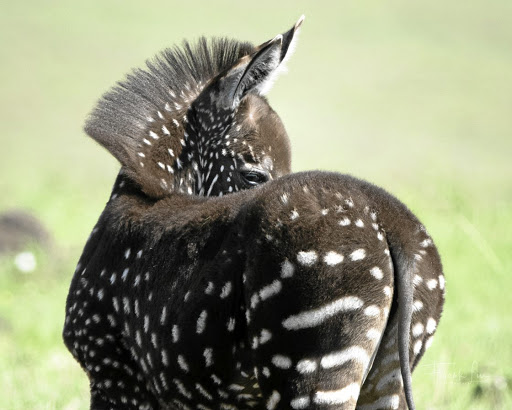 This spotty zebra foal owes its name - Tira - to the guide who spotted it in Kenya's Maasai Mara Reserve.
Image: Frank Liu/@frankliuphotography

According to National Geographic, the little guy (or girl, nobody knows) has a rare genetic mutation called pseudomelanism, which presents as an abnormal stripe pattern.

Such cases are extremely rare - while similar foals have occasionally been seen in the Okavango Delta in Botswana, this is the first time such a zebra has been seen in the Maasai Mara, a place where zebras thrive.

Tira's lack of stripes may make him/her more susceptible to biting flies and will also make him/her stand out in the herd, with a higher risk of being nabbed by predators. That's how it goes for prey animals - every day is a struggle for survival. But with a little bit of luck, Tira will make it to adulthood and one day have foals of his/her own.

Last night a Maasai guide discovered an one of a kind genetically mutated baby zebra in Maasai Mara and named it after his surname - Tira. This morning we were one of the first ones to visit Tira! Few years ago there was a similar case, however that zebra still maintained the stripes and brush-like tail. Tira, however, has patterns that appear as polka dots! ◼️⚪️ I hope the experts will look into this case and share some interesting discoveries soon! @natgeo @natgeowild @natgeoyourshot

This is the intense moment a powerful elephant charges a rhino and her baby at a waterhole in the Kruger National Park.
Lifestyle
2 years ago

WATCH | Snake eats screeching frog while it is still alive

This is the moment a snake shows a frog the meaning of being eaten alive.
Lifestyle
2 years ago

"Oh my god, it's still alive!"
Lifestyle
2 years ago