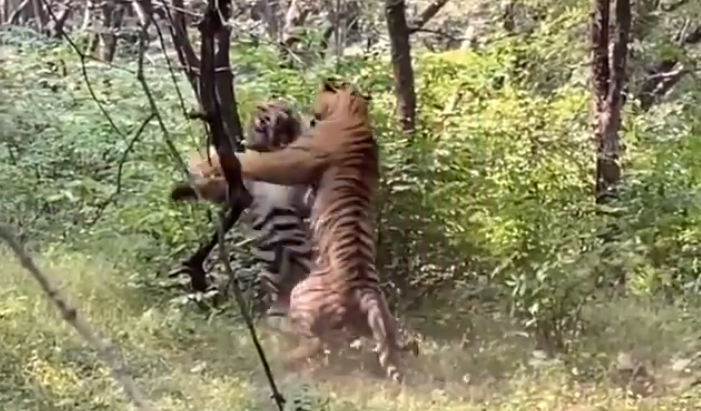 Two tiger brothers got into an intense fight over a tigress in the Ranthambore National Park in India.

The video was shared to Twitter by Indian Forest Service Officer Parveen Kaswan.

Hindustan Times reports the video shows two tigers pouncing on each other and engaging in a fight, while a third looks on.

Kaswan tweeted, “That is how a fight between #tigers looks like. Brutal and violent. They are territorial animals & protect their sphere. Here two brothers from #Ranthambore are fighting as forwarded. (T57, T58).

In a follow-up tweet he wrote, “As many are asking about the results. T57 won. Nobody is seriously injured. It was for the tigress T39. Which can be seen there in the video.”

That is how a fight between #tigers looks like. Brutal and violent. They are territorial animals & protect their sphere. Here two brothers from #Ranthambore are fighting as forwarded. (T57, T58). pic.twitter.com/wehHWgIIHC

In a video that's gone viral, a leopard can be seen stalking a sleeping dog at a home in the city of Amreli in India.
News
1 year ago

In the bush animals often try to steal food from others but this crocodile was having none of it.
Lifestyle
1 year ago

A video of a tourist getting out of his car to get closer to a pride of lions in the Kruger National Park has gone viral.
Lifestyle
1 year ago