Why the MSC Grandiosa is cruising's bright new superstar

MSC’s newest flagship is next-level in many ways — from its eco-conscious inner workings to its galaxy of attractions for guests, writes Elizabeth Sleith 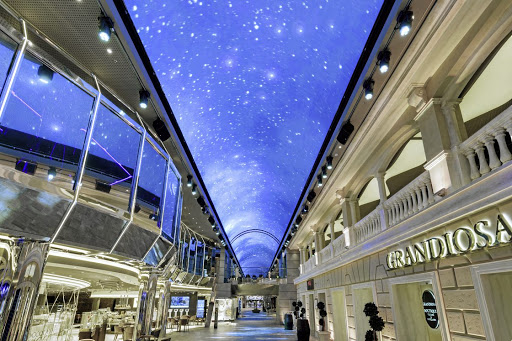 Superlatives are unavoidable when it comes to MSC. Its parent company has a history in shipping stretching back to the 1600s, and since it entered the cruise market in 1988, it has astronomically expanded its fleet. Today it is the world's largest privately owned cruise company, with 17 ships visiting 225 destinations.

In the past two-and-a-half years alone it has launched five new vessels. Its latest, the Grandiosa, christened in Hamburg, Germany, in November, is the third ship in its groundbreaking Meraviglia series - the largest cruise ships ever built for a European owner - and the first of the Meraviglia-Plus class, featuring larger tonnage and greater guest capacity than the first two Meraviglia vessels.

So you know it's big. And yet it may still take some effort when you first board to keep your jaw in the upright position. The indoor promenade onto which you'll emerge looks at first glance like a glitzy European street - with shops and restaurants running its length on two levels.

This "street" is 112m long and is especially remarkable for its ceiling. This 93m domed LED screen is the longest sky screen at sea and its images are ever-changing. Look up one moment and find a collage of passengers' Instagram snaps; later a gargantuan stained-glass ceiling; later still, a star-lit sky. Each evening it becomes a movie screen, telling short, fantastical animated stories.

From how to find the right cruise to how to skip the long lines, these tips will help you make the most of your time at sea
Lifestyle
1 year ago

Underneath that ever-changing sky, the promenade by day is a space for ambling, by night a giant dance floor.

Of course, there is shopping. The Grandiosa's 1,137 square metres  of retail space - the largest ever on a cruise ship - includes 12 boutiques and more than 400 brands. If your budget allows, you can disembark with bags stuffed with big names - from Michael Kors to Ferragamo to Breitling to Bose.

The main restaurants are included in your fare and serve excellent multi-course meals in refined settings. Dining times apply but the Marketplace buffet is open 20 hours a day and has a staggering selection.

For something extra special (and extra spending), it's back to the promenade with you, where several eateries will take you round the world, not only with their food but also with their transportive interiors. 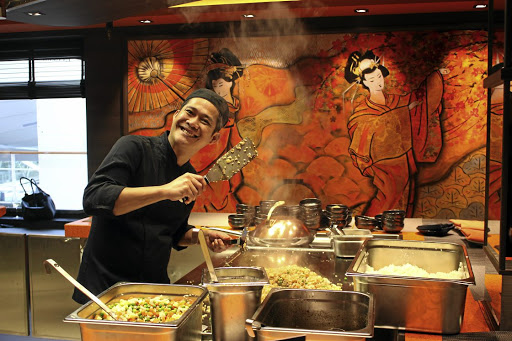 Orland Vicentillo from the Philippines at the Kaito Teppanyaki Restaurant.
Image: Elizabeth Sleith

Disappear into Dublin at the Irish-style Masters of the Sea pub, with lots of dark wood and Guinness on tap. Anyone for Tokyo? Well, it's right next door at the Kaito Teppanyaki Restaurant & Sushi Bar, where the fast-fingered chefs will impress with their knife skills. Or sip on sangria at HOLA! Tapas bar, where Spain's Michelin chef, Ramon Freixa, presents plates for the sharing on long wooden tables, with a constellation of brass pots dangling overhead.

Just up the drag is L'Atelier Bistro, a Parisian-style café offering everything from charcuterie to cheeses to steak fries. A little stage for jaunty musicians lends to the magnifique illusion, while, for art lovers, the café's interactive exhibition, with 26 original etchings by French impressionist Edgar Degas, is a true treat.

Sweet-tooths will find the Willy Wonka-esque chocolate café, run by French master confectioner Jean-Philippe Maury, impossible to resist. Here, patrons can not only watch the chocolates and macaroons and bonbons being made but can also design their very own chocolate bar to take home. 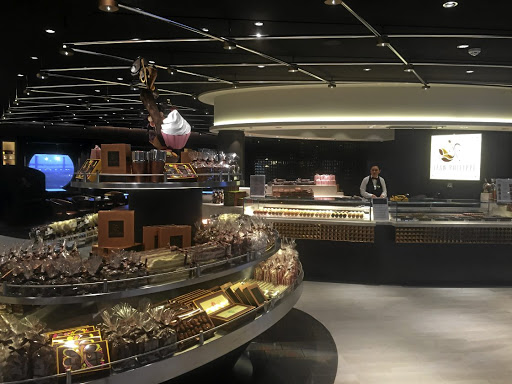 Maury, meanwhile, achieved the finest feat I've ever seen in chocolate: at dinner one night in the main restaurant, dessert was a tiny replica of the ship made entirely out of chocolate, with little swirls of blue syrup for waves. It was so pretty that eating it seemed oh so wrong - and yet somehow everyone managed, and then it was oh so right.

LET THEM ENTERTAIN YOU

Let's face it, a cruise without a nightly musical revue would be no cruise at all. The free ones happen nightly in the 975-seater Theatre La Comédie, but there is also the booking-only Carousel Lounge, built specifically to host Cirque du Soleil at Sea. MSC's partnership with the world famous company means the three Meraviglia-class ships (so far) all feature their own exclusive Cirque du Soleil shows. Grandiosa has two, and a booking gets you dinner and a spectacular show.

There is also a fantastic games area, with an arcade, a bowling alley, an F1 simulator and a Virtual Reality Maze. At the latter, put on the headset and you're immediately transported into a virtual world. I had a game which involved a sort of Indiana Jones-style labyrinth with perilous cliff edges and skeletons shooting arrows at me. You play with your own bow and arrow and shoot them back and at the end get to kill a gigantic Minotaur. You would scream too if it happened to you - but there is also a less terrifying game for children. 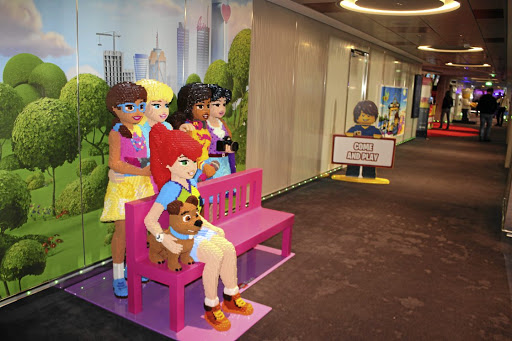 The ship has 700 square metres of space dedicated to kids of all ages.
Image: Elizabeth Sleith

Of course, the Grandiosa is extremely family friendly - as are all the MSC ships. With 700 square metres dedicated to kids of all ages, let's just say that the dreaded "I'm booooored" is a whine no parent is likely to hear. There are brilliantly kitted out playrooms for different age groups, and the Wild Forest Aquapark has water slides, a wobbly bridge and giant water pistols. For teenagers there are sports areas and a disco with an alcohol-free bar.

There are also tons of staff-led activities, including drone-racing and spy missions. A sweet touch is Kelly and Kloe on Board, a web series for kids about the on-board adventures of two young girls. I'm sure letting the kids binge on it (it's on Youtube) before the holiday would be a great way to get them "on board", and several kids' activities on the ship revolve around the show - from learning the theme song to script writing to actually getting to be in it.

Parents, meanwhile, can nip off to the Aurea Spa, which has a blissed-out-coma-inducing 160 treatments on its menu. The thermal area alone is hard to leave, with its jet baths and hot-cold rooms and sensory showers.

There is also a spa doctor. Curious about what such a person might do, I booked a consultation and had a Mauritian GP named Safeer Azima MD peer at my forehead, frown and declare, "Oh, you definitely need Botox."

As luck would have it, this is a treatment available on board, as is something called cryotherapy, a sort of non-invasive liposuction, where a hose is pressed against your fat bits, and, a few days later, the fat bits die off. I didn't do either, promise, but with all those opportunities to eat on board, it was surely tempting.

As it is with planes, harmful greenhouse-gas emissions from cruise ships at this point are unavoidable. MSC is investing heavily in finding solutions - the ultimate goal being pollution-free ships. In the meantime, the company did make history this year by becoming the first global cruise line to offset all its CO2 emissions. This has made its operations effectively carbon-neutral since January 1.

The Grandiosa, meanwhile, is the company's most environmentally advanced ship to date and features several innovations, including systems to significantly reduce harmful emissions as well as advanced waste management and waste-water treatment systems.

Last month the company also launched its Protectours programme, a range of off-shore passenger excursions with an eco-conscious angle. These offer guests the chance to make a meaningful contribution, planting trees in Reykjavik, Iceland, to learning about honeybees in Corfu, Greece.

The Grandiosa is a machine on which you can't help but be carried away. Literally, of course, you'll be moving from port to port. Inside you'll be immersed in an all-you-can-eat, shop-til-you-drop, sleep-when-you're dead extravaganza. If what you're after is a holiday that's bigger, better, more ... she's the one.

• Sleith was a guest of MSC

OFF YOU GO: SPECIAL OFFER

Experience all the glamour and grandeur of the Grandiosa this Easter with a round-trip cruise from Genoa, Italy. Stops include Naples and Messina in Italy; Valletta, Malta; Barcelona, Spain; and Marseille, France. The rate includes port charges, gratuities and R200 pp cruise insurance. Departs April 5.

BONUS: Book by February 29 2020 and you'll also get a free "Drinks on Us" package - that's unlimited consumption of all drinks priced up to €6 (excluding specialty restaurants, minibar and room service). Ts & Cs apply. E&OE

CRUISING AND THE CORONAVIRUS

With three ships by February 6 having faced quarantines due to fears of infected passengers, the coronavirus has rapidly become a huge concern for the industry.

MSC - which has had no suspected cases - has moved swiftly to protect its ships. Since January 31 no one who has been to mainland China in the past 30 days is being allowed to board any of its ships, and thermal scans are mandatory for everyone prior to embarkation. Anyone with symptoms of illness (such as feverishness, and difficulty breathing) will be denied embarkation and any guests who develop such symptoms while on board will be isolated.

MSC said it was monitoring the situation and "consulting with international and local health authorities".

Can we get married - or renew our vows - on a cruise in SA?