Elizabeth Sleith heads to this Waterberg lodge to enjoy some incredible animal action, great hospitality and all the creature comforts she could ever want

I can't help thinking that the people and animals of Tintswalo Lapalala had a motivational huddle before we arrived. It was, after all, early August; intra-provincial leisure travel was still forbidden, and the Waterberg, Limpopo, lodge had seen no guests for months. Picture safari manager Alistair Leuner, perhaps, taking the Al Pacino role from Any Given Sunday to rally the team.

"We're in hell right now! We can stay here or we can fight our way back."

Or maybe Matt Damon as Francois Pienaar in Invictus: "This is it. This is our destiny."

Whatever it was, it did feel like everyone was in on Mission Impress. And not just the staff, undeterred by the weirdness of hand-sanitiser and social distancing from laying on some old-friend-style hospitality, but the animals too.

Tintswalo, all discreet wooden platforms and camouflaged glam-tents, lies low on
the 44,500ha Lapalala Wilderness Reserve, a gigantic space for the animals to roam, and yet we still managed to catch a near constant stream of action.

Not five minutes into our first drink on the main deck, two elephants appeared at the water hole, barely 30m ahead. We oohed and they flapped their ears as if to scoop up the sounds of our adoration. They must have missed this too.

By the time our lunch - Covid-safe, individually baked boboties - was over, we'd also had a mini-parade of warthogs and a triple-rhino sighting: mom, dad and baby casually milling by the water on dainty ballerina feet.

The lions chose the late-afternoon game drive to flex their muscles: first a pair who feigned boredom by flopping down next to the vehicle. Then - plot twist! - the male mounted the female. Lions' fertility cycles vary widely, but the female will be in oestrus for only about three days, so this was a most excellent show. Let's not dwell too much on how quickly it was over.

Meanwhile, just across the Palala River, from which the reserve takes its name, another lioness picked her way across the rocks with four cubs close behind.

The humans rounded out the day's score with surprise sundowners and snacks in a circle of lanterns, which grew brighter as the sun bled a line of deep orange across the mountains.

Later, there would be dinner and deep pillows and the lions again, roaring in the dark. So you see, they can't not have plotted to impress, and even on day one, they knocked it out of the park.

HOW TO CATCH AN ELEPHANT

The main event and the real reason we were there, however, was scheduled for the next morning. An elephant bull was getting a new tracking collar and we were there to see it.

The first night's dinner, therefore, had been preceded by a gathering in the lounge, where Lapalala's biodiversity manager Hermann Müller tackled why collars have critics. If you're a tourist looking for a lucky sighting, some say they're cheating. Also, they ruin the aesthetics, and possibly hinder the animal.

Hermann's counter is that, in a perfect world, there would be no fences. Reserves are already artificial worlds, whose goal is to preserve a part of the animals' dwindling habitat. For the conservationists and scientists involved, information is king - and that's the pro that outweighs all the cons of the collar.

Lapalala only started introducing elephants in 2018, and this particular bull arrived last year from the Marakele National Park. As vet Annemieke Müller explained: "It's very important for us to see how the animals behave on the reserve, where they move to, because other management decisions we take might be affected by that."

As for the possible hindrance, this guy weighs 5.5t. The collar, at 14kg, would be like a human wearing an ear stud.

The riskiest part is getting the collar on. Because they want to avoid the elephants developing grudges against cars, the darting will be done from a helicopter. Only after the creature is unconscious will the team approach on land. But where and in what position it collapses is crucial. The opiates typically take 10 to 15 minutes to kick in, a fair window in which a drugged animal might wander into a perilous location: a steep hill, or into a river. Hence, no shots are ever fired within 5km of such places. 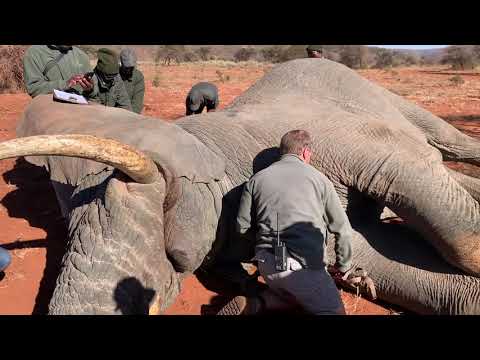 Second, it must fall in a position that keeps the airways clear. If it lands in what they call "sternal recumbency" - essentially forwards with its full weight on its chest -
it could suffocate. Finally, some unknown, pre-existing condition could cause a negative - sometimes lethal - reaction to the drugs.

In short, Hermann summarised, this is serious business and we must be prepared for things to go wrong.

The next morning, the Müllers are already up in the sky, establishing the bull's location while we breakfast at the lodge's long dining table. It could take time to drive him into a safer location if need be, but his position is perfect and so our coffee cups are barely drained when we are summoned. We head out with ranger Corne just after 9am to join the veterinary team.

The helicopter is hovering not far from the lodge. Annemieke must be taking aim as we bump along the road because soon there is a crackle on the radio. "The dart is in."

By the time we reach him, in a nice, open area just metres from the road, the elephant is clearly disoriented, a big drunk beast staggering in circles in the dust. Then he's down and we are cleared to approach on foot. It's a walk of no more than five minutes but by the time we get there a team of about 10 has already heaved him onto his side - because he did fall in the feared position, on his chest.

Image: Elizabeth Sleith A close-up of the elephant, tranquillised to get a new collar on the Lapalala Wilderness Reserve.

Now he lies with his legs crossed, the giant, cracked drums of his soles sticking outwards. His mouth is slightly open, beckoning a peek inside the pink-black cavern. His tusks are nicotine-stain yellow. His parched-mud skin is speckled with stubby hairs.

The immediate sight of this felled beast is startling, even though we know why. But someone has propped a twig into the end of his trunk to help keep the airway open and there is a deep, rhythmic rumbling erupting from it. It's the sort of noise that, in human bedrooms, could end marriages. But here it is a wanted sign: he is snoring.

Annemieke pulls the flap of his ear down over his eye - a sleep mask to help minimise sensory stimulation - and the team becomes a pit-stop crew, everyone with a job to do. If nothing goes wrong, they have about 45 minutes before he will start coming to.

The old collar is sawn off; the new one is looped on. Some hair is tweezed, some toenails clipped - DNA samples that will go into a database. There are antibiotics for the dart wound and measurements to be taken: the length of his legs, his tusks. It takes four men to lift up his trunk to measure its circumference (93cm at the base).

Annemieke regularly presses the arteries in his ears to check his blood pressure. She puts a hand in front of the trunk and gets a small draft. Six breaths a minute. All is well. We tourists watch, take photos, lay hands on his mysterious skin, and try to stay out of the way.

At last, the vet taps her watch. Time to wake him. Equipment is gathered, boxes snapped shut. The crew retreats and we leave with them, while Annemieke stays behind, brandishing the final injection. This will reverse the opiates within two minutes.

By the time we climb back on the vehicle and look back, the bull is already on his feet and tripping away. It's 10.20am. The new collar shoots off a spark of sunlight. Corne chuckles. "That guy's got a new necklace and a moerse hangover," he says.

The Lapalala reserve started with the purchase of a 5,000ha farm in 1981. Around then, much of the Waterberg - so named for the myriad streams and rivers that cross it - was a sparse scattering of cattle farms, the wildlife long chased off by hunting and habitat loss. In the years since, more farms have been acquired, and as animals have been reintroduced, slowly and steadily, the vegetation has recovered too. 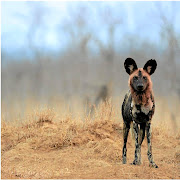 These past few months, much of the focus has been on some wild dogs. One of the last free-roaming packs in the area has raised the wrath of local farmers by stealing their livestock. Around humans, they also face daily dangers such as snares and cars.

To protect these actual underdogs - there are only about 440 left in SA - Lapalala captured 10 in the early days of lockdown and place them in a fenced area on the reserve. Amazingly, their numbers multiplied when a litter was born in the boma.

At the time of our visit they were still there, giving us a front-row on the frenzy at feeding time when an impala, shot for the purpose, was dragged inside the boma.

It's a cushy life for the dogs to have their dinner delivered and their natural predators, such as lions, locked out. But the long-term goal is to release them, hopefully once they've figured out that they can live off this land, free from human dangers, at least.

The Müllers' next mission, over the Heritage Day weekend, is to collar some of the dogs. This one, too, will include spectators - whose entrance fees will boost the conservation coffers. Twelve guests, the maximum, have already snapped up the spots.

These collars could turn out to be true life-savers as wild dogs are famously wily. Even with their best efforts, Hermann says, when they are released (a date yet to be decided), there's a strong chance they'll escape the reserve. If they have any sense at all, of course, they'll never leave. Given half the chance, I wouldn't have either.

The Lodge: Tintswalo Lapalala, 300km from Joburg, is one of just two commercial lodges on the 44,500ha Lapalala Wilderness Reserve. It has seven luxury tented suites, which overlook the bush from raised wooden decks and have private plunge pools and in-room fireplaces. In all, there's space for up to 16 adults and four children. The reserve is entirely off-grid, operating on solar power and back-up generators, yet still with all the mod-cons you might think you can't live without, such as air-conditioning and WiFi.

Activities: Daily game drives and guided walks in the bush, as well as to Iron Age and rock-art sites. Riverside picnicking, fishing and swimming in rock pools. There are also spa treatments, sundowner cruises, stargazing, and romantic sleepouts in the reserve.

Children welcome: Full marks for their family-friendly vibes. Their kiddies' welcome gift - a little set of binoculars and a special kids' guide to the reserve's animals - deserves special mention and there is a children's activity programme.

• Sleith was a guest of Tintswalo Lapalala.