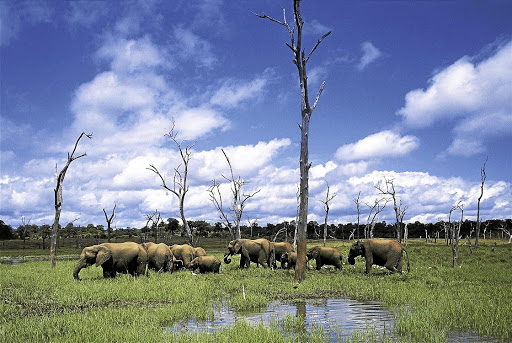 Toxins in water produced by cyanobacteria killed more than 300 elephants in Botswana this year, officials said on Monday as they announced the result of an investigation into the deaths which had baffled and alarmed conservationists.

Cyanobacteria are microscopic organisms common in water and sometimes found in soil. Not all produce toxins but scientists say toxic ones are occurring more frequently as climate change drives up global temperatures.

Cyril Taolo, deputy director of the department of wildlife and national parks in Botswana, told a news conference the number of elephant carcasses found since deaths were first reported about early May had risen to 330, from 281 in July.

“What we just know at this point is that it's a toxin caused by cyanobacteria,” said Taolo, adding the specific type of neurotoxin had yet to be established.

Authorities will monitor the situation during the next rainy season, and Taolo said for now there was no evidence to suggest that Botswana's wildlife was still under threat as officials were no longer seeing deaths.

KwaZulu-Natal's Hluhluwe-iMfolozi Park (HiP) will receive crucial technology to aid in the fight against poaching.
News
1 year ago

The department's principal veterinary officer, Mmadi Reuben, told the same news conference that questions remained as to why only elephants had been affected.

Other animals in the Okavango Panhandle region appeared unharmed.

Some cyanobacterial blooms can harm people and animals, and scientists are concerned about their potential affect as climate change leads to warmer water temperatures, which many cyanobacteria prefer.

Southern Africa's temperatures are rising at twice the global average, according to the Intergovernmental Panel on Climate Change.

“It amounts to having the right conditions, in the right time, in the right place and these species will proliferate,” said Patricia Glibert, a professor at the University of Maryland Centre for Environmental Science, who has studied cyanobacteria.

“These conditions are coming together more often, in more places, so we are seeing more of these toxic blooms about the world.”

In neighbouring Zimbabwe, about 25 elephant carcasses were found near the country's biggest game park and authorities suspect they succumbed to a bacterial infection.

The animals were found with tusks intact, ruling out poaching and deliberate poisoning. Parks authorities believe the elephants could have ingested the bacteria while searching for food. The carcasses were found near water sources.

“We considered the possibility of cyanobacteria but we have no evidence that this is the case here in Zimbabwe,” said Chris Foggin, a veterinarian at the Victoria Falls Wildlife Trust, which tested samples from dead elephants from Zimbabwe and Botswana.

Zimbabwe has sent samples to Britain and is waiting for permits to send samples to two other countries, Foggin said.

Africa's overall elephant population is declining because of poaching but Botswana, home to almost a third of the continent's elephants, has seen numbers grow to about 130,000.

Cyanobacteria are micro-organisms that are common in water and also occur in soil. Some can produce toxins that damage the liver or nervous system of animals and humans.

Sometimes called blue-green algae, they have algae-like characteristics such as using sunlight to make food.

HOW DO THEY SPREAD?

Cyanobacteria proliferate in warm, nutrient-rich conditions. When they multiply they can create blooms that spread across the surface of a water body and discolour it. Fertilisers used by farmers can encourage cyanobacterial blooms to form through nutrient loading.

HOW IS CLIMATE CHANGE INVOLVED?

WHAT CAN BE DONE?

Once cyanobacterial blooms form, there is no simple solution to get rid of them, according to Luyanda Ndlela, a researcher at SA's national science council. Scientists like Ndlela are trying to identify substances that can break down cyanotoxins or control the cyanobacteria themselves without disrupting the ecosystem.

Experts are also trying to develop models to predict when cyanobacterial blooms might occur.

IS THIS HAPPENING ONLY IN AFRICA?

No. Cyanobacteria and the toxins they produce can occur around the world.

Scientists have linked cyanotoxins to more than 100 people falling ill near Lake Erie in the US in 2014, and to a 1996 episode in Brazil's Pernambuco state where patients at a dialysis centre died from liver failure.

Zimbabwe's wildlife agency said on Wednesday it had discovered more elephant carcasses near a major game park, bringing the number of dead animals ...
News
1 year ago