Musician David Scott (aka The Kiffness) has had some kiff holidays. He reveals the origins of his signature floral suit, and shares his oddest travel experience 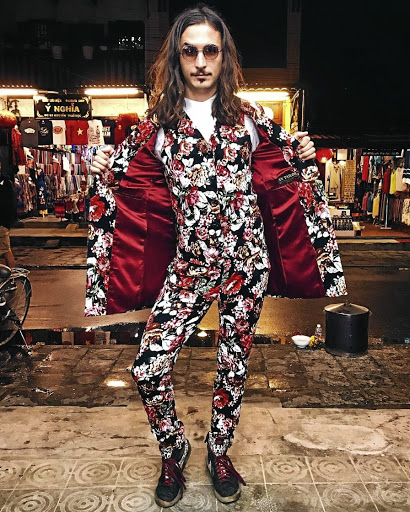 David Scott aka The Kiffness in his custom-suit made in Hoi An, Vietnam.
Image: Supplied

The first childhood holiday I remember was going to the Royal Swazi Sun with my family when I was about four. I remember playing arcade games with my brother in the entertainment room. According to my parents, I pulled down my pants and weed in the public pool in front of everyone. I don't remember that.

My first trip abroad was to the US. My dad's sister lives in the States, so when I was seven we did an epic family trip to America. I have very fond memories of Disney World. I was just tall enough to go on all the rides, and just young enough to believe that the guys walking around in Mickey Mouse and Goofy costumes were actually real.

The oddest thing I've experienced while travelling was in Hoi An, Vietnam, where I decided to get a custom suit made. Materials are so cheap there I thought: “Let me get a ridiculous suit.” So we chose a material that resembled grandmother's curtains and the suit got made within 24 hours. I now use it for my onstage performances.

The most remote destination I've ever been to was Chitabe in the Okavango Delta. My schoolmate's dad worked for a safari company in Botswana, and somehow I cracked an invite. The only way to get there was by a chartered plane. In this tiny plane we had to dodge massive thunder clouds to avoid getting struck or shaken around in crazy thermals. That was a wild trip.

I like Cape Town for its beauty; Joburg for its people. My theory is that the uglier a city is, the nicer its people are, which is why Capetonians are the worst.

My theory is that the uglier a city is, the nicer its people are, which is why Capetonians are the worst

My favourite international city is Florence. My wife and I were there for the International Gelato Festival in 2018, which took place in Michelangelo Square. We ate so much gelato that I needed to take a nap in the neighbouring rose garden. When I woke up from my coma we saw the most beautiful sunset over the cathedral. That whole experience was enough to give Florence the #1 spot on my favourite city list.

If I'm choosing between roughing it and luxury, both have their perks. I've grown fond of camping. I was never really that keen on camping, but my Afrikaner wife has made me grow to love it. Maybe because we've invested in some decent camping equipment, and it's gone from more of a camping to a glamping experience. I've found the trick is to sleep on a stretcher with a blow-up mattress on top of that. Then you're sorted.

My best travel advice is to leave things as unplanned as possible. From my experience, the best parts of trips are often the ones where you allow for a bit of spontaneity.

Most people lose their heart in Venice, but I lost my iPhone. It was meant to be a romantic ride in a gondola with my wife, but it went south very quickly when I thought it would be a good idea to set up my phone on a tripod to get the perfect shot of us with the gondolier behind us. In my excitement I forgot that gondolas aren't exactly stable. I set up the phone on a timer, and on my way back to my seat the gondola wobbled and my phone took a tumble into the depths of the canal.

I then had to spend the rest of the trip around the canals pretending to enjoy the experience, meanwhile I was crying inside because I'd not only lost my phone but also three months' worth of photos that I'd taken during the trip. As a way of dealing with the trauma, I felt compelled to pay tribute to my phone by attempting to recreate what would've been his last ever photo, so I Photoshopped myself into this photo, which I took from his less adventurous counterpart, my wife's phone. 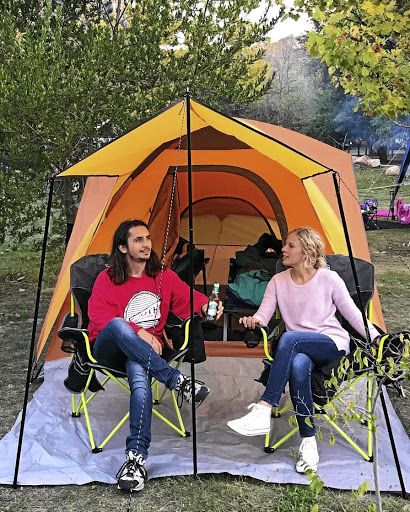 David Scott has grown to love camping because of his wife.
Image: Supplied 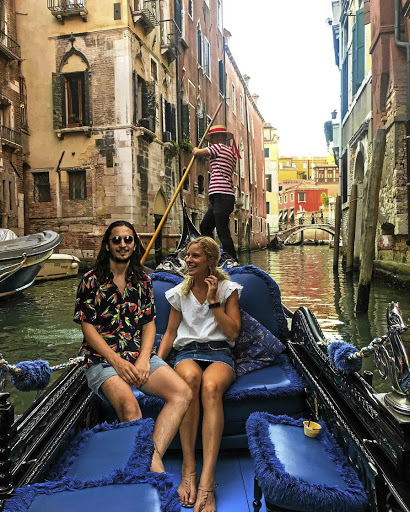 David Scott photoshopped this image in an attempt to recreate a romantic gondola ride, in Venice, with his wife.
Image: Supplied

I really enjoy trying new and adventurous food when I travel. I'd say the weirdest thing I ate was moth larvae and deep-fried crickets in Vietnam. The moth larvae tasted like peanut butter and the crickets tasted like crunchy popcorn.

The number one place on my bucket list is Greece. Friends keep telling me how fresh the tomatoes are and how they taste so different to tomatoes anywhere else in the world. My wife is a chef, so I think she's pretty keen to see what all the tomato fuss is about. If we do go, those tomatoes had better be worth the trip.

Lockdown has taught me that I quite enjoy being at home, exploring my own creativity. It's definitely been one of the most productive chapters of my life. But I do feel a yearning for a change of scenery. There's nothing quite like being plunged into a new country and experiencing different foods and cultures to reinvigorate the spirit.

I travel to places where I want to eat, says celeb chef Zola Nene