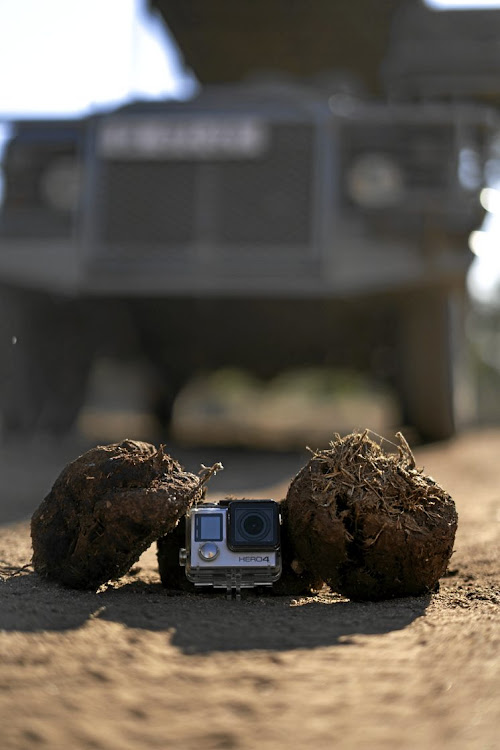 Filming a ‘hidden safari’ with a GoPro tucked into a ball of elephant dung — a relatively safe place for the device because elephants don’t stand on poo.
Image: Ross Couper

From a US woman who celebrated her 50th birthday with a series of safaris for her friends, to cameras hidden in animal droppings.

This is how virtual safaris for overseas guests have kept SA’s wildlife alive in the minds of tourists while they are unable to travel to the country.

For one lodge operator the virtual safaris have even brought in some much-needed cash as foreign guests stay home.

Before lockdown, tourists would pay anything from R15,000 to R32,000 a night at some of these lodges.

Now, at $250 (about R3,800) for a 90-minute game drive, the virtual tourist can buy access to an exclusive link with a dedicated ranger at luxury lodge operator andBeyond, whose portfolio includes Phinda Private Game Reserve as well as lodges in the Masai Mara and the Serengeti.

Drawing on an existing arrangement with live wildlife content provider Wild Earth, a handful of andBeyond rangers were given a crash course in virtual wildlife safaris.

“We felt that this was something we could do,” said chief marketing officer Nicole Robinson.

The company had use of footage shot at Ngala as well as from two more Wild Earth feeds from nearby Djuma Private Game Reserve.

The safaris, which were free to view, were an instant hit, with the rangers answering viewers’ questions as the footage rolled.

The most common question was whether the animals’ behaviour had changed during lockdown. There were unusual ones too.

“Has an animal ever climbed onto the vehicle with the guests,” one viewer asked Phinda ranger Dino Coundourakis.

On a safari with a family, a boy of seven asked ranger Jarryd du Preez: “What part of a cheetah does its baby come from?”

Another virtual guest asked Damen Pheiffer why the sand at Phinda was so red: “Is there blood in it?”

There were so many questions the rangers were unable to answer them all.

“We started getting requests for private virtual safaris,” said Robinson. “It was all about access to the guide.”

The result was a range of 90-minute safaris that also used pre-recorded Wild Earth footage curated by a ranger.

“It started slowly,” said Robinson. “Then we were featured in the Wall Street Journal and it went berserk.”

Since May last year, these “private” safaris have earned andBeyond an estimated R1m.

The revenue is used to fund ongoing conservation and maintenance work and local NGOs and charities that the company works with, including the Africa Foundation, its development arm, which gets 10%.

Some of the money is also used to tip guides.

For Singita content creators Ross and Lindsay Couper, the shutdown turned into one of the busiest times of their lives as they headed out into the bush to get footage and sound recordings of animals and birdlife.

“As we went into lockdown we sent them to get as much content as possible,” said Singita communications manager Lisa Carey.

The idea was to keep people in love with the bush by doing free “virtual safaris” during which viewers across the globe could go on a game drive while rangers described what was happening and answered viewers’ questions.

The Big Five of virtual safaris: take a relaxing bush break during lockdown

Sanet Oberholzer tunes in for one of virtual tourism pioneer WildEarth's live-streamed game drives, plus rounds up other online animal encounters to ...
Lifestyle
1 year ago

It was not all plain sailing, however. Patchy cellphone signal made live-streaming impossible. Time zone differences also came into play – when the sun rises over the bush in SA, it is the middle of the night in the US.

On one of the first live safaris, Couper was answering people’s questions and responding to their comments as they came. At one point, as he was filming a tortoise, a viewer commented, “That’s boring — move on.”

“I was quite thrown by that,” said Couper.

Instead of live safaris, the Coupers tried other methods, including posting footage from drone flights and time-lapse photography.

Their biggest hit, however, came from leaving a GoPro camera in elephant droppings.

“Elephants tend not to stand in their own droppings. We tried hiding it in rocks and woods and they would just knock it over.”

Dubbed the “hidden safari”, the droppings camera turned up novel footage showing little-seen behaviour of animals such as mongooses and warthogs.

Virtual safaris will never replace the real thing, but they have helped people connect with nature, said Singita’s Carey.

“They have made people fall in love with nature and Africa.”