Three kids and a kayak: a budget-friendly adventure on the Wild Coast 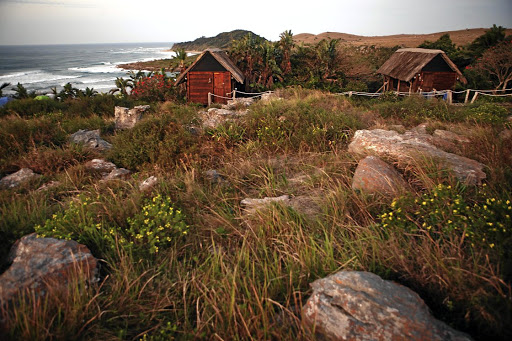 As we headed off to the heart of the Transkei, driving south from Durban with a lime green Nessy on our roof rack, we knew that this carefully planned trip had turned an unexpected corner.

The kayak, fondly named after the great Loch Ness Monster, had unexpectedly jumped aboard at the last minute, through the power of impulse.

As we set off with three children in the car, the green monster peeked over the roof, just visible through the windscreen, a temptation waiting to be explored. We were determined to find the perfect launch points for Nessy to enter the water.

The 50km, three-day Blue Mountain Trail in the Overberg is  a perfect blend of exercise, education and well-earned downtime at the end of each day
Lifestyle
1 year ago

Our first stop was at the Red Desert Nature Reserve, what has become known as "the world's smallest desert".

This reserve, 170km from Durban, is something of a secret. From the parking, a three-minute walk down a grassy path, we found dunes that are a dark reddish sand/clay colour. If you kneel down, you might forget where you are and be transported to the Arizona desert. Although small in size — it is only 200m in diameter and 11ha in its entirety — this was a unique place to visit.

As we continued, we added a sprinkle of spontaneity with a stop at the Beaver Creek Coffee Estate. I had no idea they were growing coffee in this area and was intrigued to see the plantation on this small, family-run estate. Sitting outside, relaxing and enjoying the brew while looking over the plantation, I once again felt I'd discovered a fantastic little secret just a short distance from the city.

Loaded with a few bags of coffee for the road, we were soon back on our way and heading over the Mtamvuna River bridge and officially crossing from KwaZulu-Natal into the Eastern Cape.

Here, the landscape changes drastically. Our eyes were met with fairy-tale green hills with a handful of colourful circular traditional Xhosa homes with thatched roofs.

Our destination for the night was Mtentu Lodge and we can personally attest to their statement that "getting here is half the experience". The journey is not smooth, and a 4x4 or high-clearance vehicle is recommended. Alternatively, given that it is only 24km from the Wild Coast Sun (as the crow flies), hiking or cycling there are also options. In our case, with the children, we opted for the drive.

Foreign travel remains tricky thanks to Covid. Luckily our country boasts a wealth of locales that can stand in for some of the world's greatest ...
Lifestyle
1 year ago

As we departed the tar road, our tyres left a cloud of dust trailing behind us. We drove for hours as the children snoozed. Our trailer followed, packed to the brim with necessities. We followed the directions provided by the lodge, feeling like we were on The Amazing Race. With no road signs, we found ourselves navigating using pictorial and environmental clues such as "there is a drainage ditch just before the split" and "a telephone pole on the hill". We passed a school "with a green roof" and, finally, with the odometer on 47km, we saw our destination and our hearts swelled with excitement.

Stretching the stiffness away after the bumpy drive, we felt we'd arrived at the end of the Earth and discovered a secret paradise.

Mtentu Lodge is situated on a hill overlooking the ocean and forms part of the Mkambati Nature Reserve. The wooden houses look out onto the ocean and are connected by a wooden walkway. There are also some tent options. 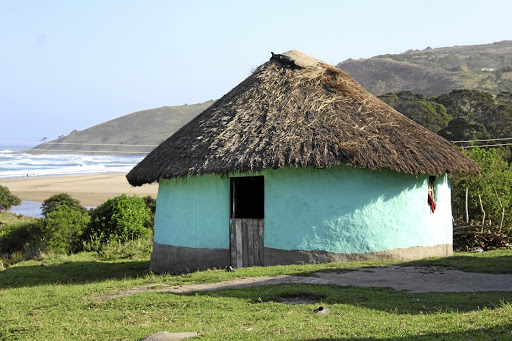 We opted for the houses with bunk beds, a winning ticket with the children. There is a balcony for the parents to sip a cocktail as they watch the world in its most natural rhythm. Frequent guests include monkeys and lizards popping by to say hello.

After a hearty breakfast the next morning, we surveyed the landscape and realised Nessy would not be entering the ocean here. But there were other adventures.

Following the advice of the locals, we decided to do the 12km round-trip hike to the Horseshoe Falls. It begins with a river crossing, assisted by a local with his rowing boat. Luckily, we'd timed it well and managed to cross at low tide. The same cannot be said for the return trip as the children decided to nap in the cave by the waterfall — how could we wake them in such tranquil surrounds?

Once across the river, the children ran from one pool to the next, splashing one another as they went along and oblivious to the fact that they'd covered a distance of about 4km.

Once we left the beach and started to walk over the hilltops, the kids tired and regular stops to refuel became necessary. A shipwreck distracted them and took us some distance further. Finally, we crossed a river mouth and discovered a cave where we could get some shade, eat lunch and swim under the waterfall.

Itching to get out of the city and explore the environment around you? These nature reserves are once again welcoming day visitors.
Lifestyle
1 year ago

Sun-kissed and high on adrenaline, we started the return journey. As we walked, the weather changed. Smacked by the wind and burnt by the sand storming at us, the children braved the conditions and we appreciated the beauty of this wild coastline. The river crossing in high tide left us bruised and battered, but we arrived for dinner back at Mtentu with many stories to share.

NESSY GETS HER DAY

The next day was all about Nessy. After a stop at the shops in the busy town of Lusikisiki, we headed towards Mbotyi River Lodge. Past the beautiful Magwa tea plantations and through the forest, we met our new home, where the ocean below us swelled with life.

We were thrilled to spot several whales breaching and the famous Wild Coast dolphins surfing the waves under the setting sun. I've no doubt now that this section of the South African coast, more commonly known as the Transkei, offers some of the most beautiful and untouched landscapes in the country. We headed to the river mouth, enjoying the view of Sugarloaf Hill in the distance. 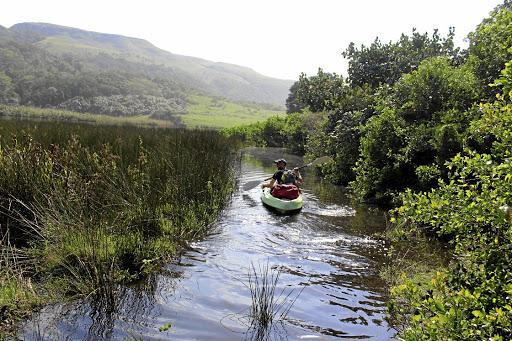 At last Nessy got to taste the waters. The kayak took us along the river, enveloped in nature with monkeys swinging overhead.

After visiting Magwa Falls, with a magnificent 142m drop, we headed back to the river mouth and rowed Nessy towards the beach — a soft and sandy spot, untouched and utterly deserted.

The water was warm, and a few fishermen were visible in the distance. A herd of cows passed by as the children were climbing into the kayak. They screamed with excitement while riding down the river mouth. Nessy gently kissed the ocean and, like us, she recognised that this wild coast is truly a wonder to behold.

Red Desert Nature Reserve: In Port Edward, about a two-and-a-half hour drive from Durban, this curious landscape — a tiny red desert surrounded by lush lands — has been the source of many myths and legends, including that it was the site of an alien landing. Visitors can hike or bike the trail to a magnificent view over the Mtamvuna estuary. Entrance is R30 per adult (kids under 12 free).

Mtentu Lodge: Part of the Mkambati Nature Reserve, the all-inclusive lodge has cabins, safari tents and camping available. The cabins are priced from R850 per person per day (for two adults — price lowers if there are more adults). Different kids' rates apply, depending on their ages. Rates include three meals per day. No self-catering available.

Mbotyi River Lodge: A variety of rooms available, plus self-catering huts and camping. Their superior rooms, with air-con and fridges, are priced from R1,376 per person sharing until late March (low season), then R1,595 until April 10 (high season). Rates include dinner, bed and breakfast during the off season and full board during the high season.

Transkei, officially the Republic of Transkei, was a nominally independent state from 1976 to 1994, when it was reintegrated into SA. Today, the term, translating roughly as "the area beyond the Kei", generally refers to the stretch of coast between the Great Kei River (north of East London) and the Mtamvuna River, which marks the border between KwaZulu-Natal and the Eastern Cape.

As travel-starved South Africans look for brief breaks, tourism authorities on KwaZulu-Natal's north coast have their fingers crossed for a bumper ...
News
1 year ago

The start of a global rollout of vaccines is good news for the travel world, but there are caveats and complications — particularly for Mzansi
Lifestyle
1 year ago