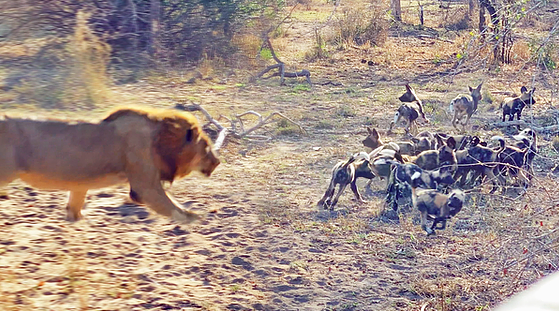 An interaction between wild dog pups was disrupted by an aggressive male lion in the Kruger National Park.
Image: Latest Sightings

An unfortunate turn of events took place in the Kruger National Park in Mpumalanga when an interaction between wild dog pups was disrupted by a male lion.

In a video shared by Latest Sightings, wild dog pups can be seen playing before a lion on a killing spree took out the pups.

The video was capture by 22-year-old junior actuarial analyst, Jared Wolf, who said his day ended “with heartache and plenty of tears” after seeing the encounter.

Watch the video below (WARNING - not for sensitive viewers):

Wolf said he first saw two different sightings of lions and 24 wild dogs interacting within 100m of each other.

“We had told our ranger at the start of our stay that we were desperate to see a pack of wild dogs as they are my favourite animal,” he said.

He said the pups were left alone for a few minutes by the mother before all hell broke loose.

“Out of nowhere, an aggressive male lion barged into the scene and unfortunately got hold of two wild dog pups,” he said.

“The aggressive lion was then joined by three other male lions. The same lion that caught the pups set off shortly after in the same direction as the pack of wild dog pups and adults that had escaped, and we started to fear the worst.

“Fortunately, our ranger then saw another pride of lions up ahead with one young male lion and a few females that were eating the remains of an impala carcass the wild dogs had taken down an hour earlier.”

A 37-year-old man is expected to appear in the Krugersdorp magistrate’s court on Monday for illegal possession of lion bones.
News
1 year ago

WATCH | Buffalo protects her calf from a leopard ... only to run into a lion

In a video, the mother buffalo can be seen smelling to see if something is in the bushes before finding the leopard.
Lifestyle
1 year ago

Pumba bids farewell to Temba, king of the jungle

Temba, the founding father of the white lion pride at Pumba Private Game Reserve near Makhanda, Eastern Cape, has died.
News
1 year ago