Bushbuck trying to fight back against wild dogs gets eaten alive 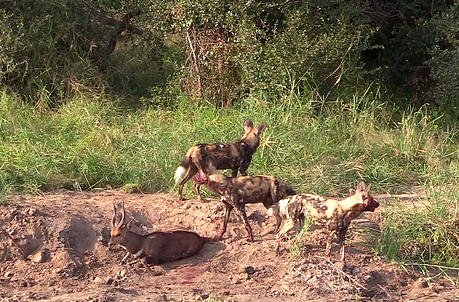 Three wild dogs fed on the bushbuck was it was alive.
Image: Latest Sightings

A bushbuck was unlucky when it was consumed by three wild dogs while still alive at MalaMala Game Reserve in Mpumalanga.

In a video not for the faint-hearted, the bushbuck can be seen making a run for its life before it was caught by the wild dogs.

The bushbuck put up quite a fight before it was consumed by the wild dogs while alive.

The heart-wrenching video was captured by photographer Jacques Proust and shared on the Latest Sightings.

Watch full video below (WARNING: Video not for sensitive viewers).

Describing the moment before the attack, Proust said a peaceful sighting turned into a fierce battle when the wild dogs spotted the bushbuck.

“I noticed an animal standing not more than 40m away in a small tributary that feeds into the Sand River. To my absolute amazement, it was a wild dog,” said Proust.

“I couldn’t believe our luck. We put down our cameras and I started the car and approached the animal.

“As I slowly approached, I noticed it was quite inquisitive. We looked in the thickets and saw a male bushbuck standing there. I knew this would be a tough antelope to bring down for one wild dog.”

Proust said although the sighting was extremely gruesome, the tactics displayed by the wild dogs were amazing to witness, as was the fight in the bushbuck.

“A sighting like this is extremely hard to watch, but I’m glad I was there to witness it.”

WATCH | Wildebeest tries to save calf from leopard and warthogs

In a video shared by Latest Sightings, the leopard can be seen trying to steal the newborn wildebeest before warthogs come along and try to snatch it ...
Lifestyle
1 year ago

A group of hyenas in the Kruger National Park, Mpumalanga, had the last laugh when they stole an impala kill from a pack of wild dogs and leopard ...
Lifestyle
1 year ago