A wondrous hike with local guides reveals this gorgeous, untouched stretch of the Wild Coast has much more to offer than the titanium in the ground, writes Jaco Prinsloo 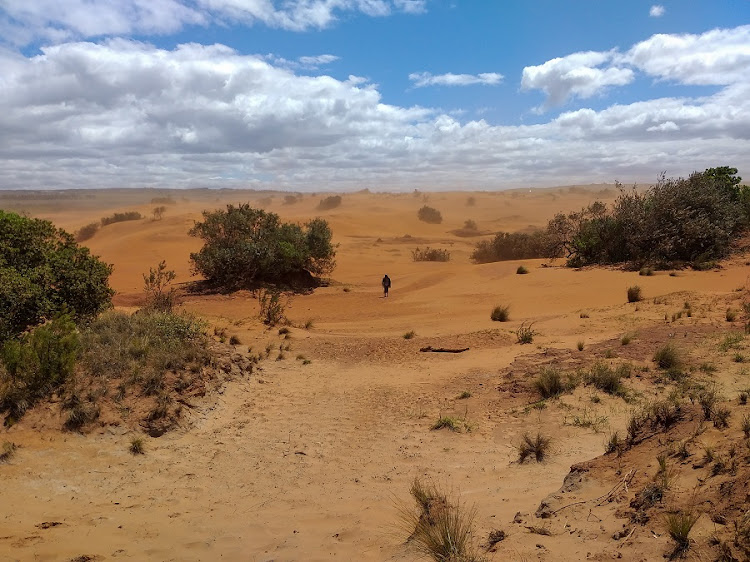 There’s a rutted, stony track that begins at Mtentu Lodge and winds through the hills of Nyaveni in Mpondoland. As we edge along it by car, Siyabonga Ndovela points out of the window to where a row of homesteads in pastel greens and pinks perches on a grassy hill.

“You see the one in the middle, the one with the bright-red roof? That is mine, and these are my fields,” he says, his chest puffed proudly. “This is my home.”

We gingerly round the next bend, and a deep-blue horizon comes into view, the white-topped breakers of the Indian Ocean pummelling the shoreline along the upper Wild Coast. Several bumps and bounces later, the track junctions with the gravel road coming up from the shore.

Three kids and a kayak: a budget-friendly adventure on the Wild Coast

“Cross the road, then take the fork to the right of the spaza shop,’’ directs Ndovela, a local home-stay operator and one of my guides for the day. “Are you sure?” I ask doubtfully, no longer even seeing the track, never mind a fork. He chuckles reassuringly, so my wheels crunch across the gravel, then follow the direction of two faint lines in the recently burnt veld.

Of course he knows where we’re going, and soon we’re parked on the edge of a bluff overlooking the Sikhombe River estuary. Water bottles are filled, my backpack strapped securely, then we’re off down the steep embankment towards the beach, on a trail that few ever walk, the trail towards the red sands of Xolobeni.

Leading our party of four is Sinegugu Zukulu, a guide and community leader who was born in Baleni, a few kilometres west. “Xolobeni is not really a place,” Zukulu explains. “It’s just the name of a school, and there’s also a shop. The villages around here are Nyaveni, Mpindweni, Sigidi and so on, and we’re all standing together against the mining of our coast.”

The beach is a yellowish white, with streaks of gunmetal and black that shimmer in the mid-morning sun. “That’s the titanium, that’s what they want,” points out Ndovela with a rueful shake of the head.

As a young boy, Ndovela followed in his father’s footsteps, working first as a porter and later as a guide for Amadiba Adventures, an award-winning community-owned tourism operation.

By 2007, the community’s objection to a plan to mine this coast (see section below on the background to the mine battle) had slowed tourist visits to a trickle, and Amadiba Adventures was shuttered. But Ndovela’s family had seen the potential and, in that same year, they began offering home-stay experiences in their own homestead. 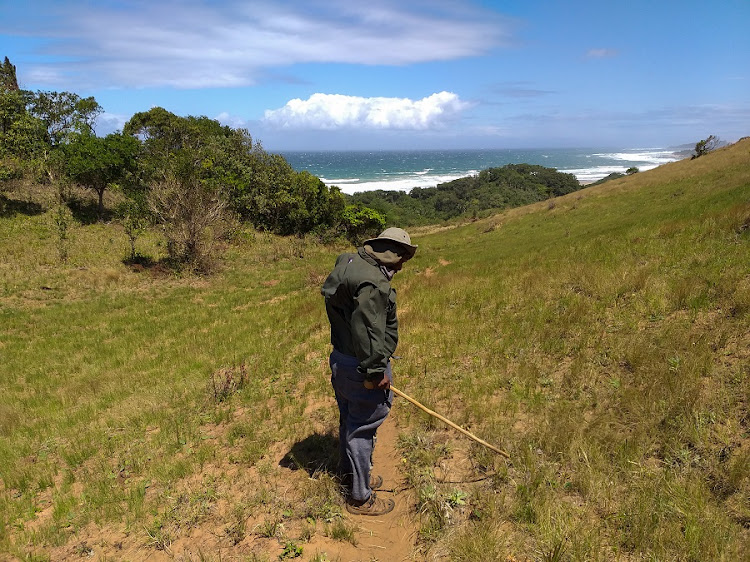 After a kilometre or so, we clamber inland over a low dune, the path enclosed by lala palms. I ask Zukulu, “Why don’t you want mines here?” “The mines will not belong to us,” he says, “but only a few people. When the mine is empty, they will leave, and our home will be destroyed. But when people come to visit, the whole community benefits, and as long as the place remains like this, people will come.”

It’s a simple, forthright argument that he and others have made for nearly 20 years, and he delivers it matter-of-factly, sandwiched between comments on exotic trees and jokes about the weather, which has begun to pick up.

Just behind the dune, the former teacher finds the sparse shade of a lone casuarina tree and delivers a masterful lecture on the geological processes that gave these dunes their striking colour, and why pre-humans settled in the region about 300,000 years ago.

He explains how, at the end of the previous Ice Age, similar places around the world were flooded by rising sea levels, while Mpondoland’s palaeontological sites remained preserved due to the uniquely steep edge of the continental shelf along the east coast of SA. He details the important role of the region’s wealth of endemic biodiversity.

What you see here, you cannot see anywhere else in the world

Zukulu pauses, looks around, then draws a deep breath, and concludes with an arching sweep of his arm: “What you see here, you cannot see anywhere else in the world.”

We continue along, through waving grass, down, over and around hills and gullies, always tracing the patches of red sand that seem to connect everything.

Every now and then, Zukulu stops to inspect an indigenous ruikbossie shrub, known locally as the ibhulu, or perhaps an umguza cycad, explaining its growth patterns and medicinal uses, and which of the bulbs and fruits are edible.

He describes how the local tribal leadership regulates the harvesting of waterberry trees for firewood, and why a life lived sensitive to their environment is how it’s always been done. The land is part of their heritage, and the amaPondo are its custodians.

TOOLS OF THE ANCESTORS

We cross the Kwanyana River at its mouth. The wind gusting at our backs helps us up the steepest slope so far. Barely over the top and the tropical vegetation instantly gives way to a swathe of scorched red desert, windswept and incongruously arid against the backdrop of farmland and green.

Flecks of quartzite and shards of granite are scattered everywhere. With the tip of his weathered knobkierie, Zukulu upends a rock the size of a large avocado, exposing the deliberately shaped, sharpened bottom end. “This one was used as a hand axe, you can see by the shape and size.”

Barely an arm’s length away what looks to the untrained eye like a lump of stone is revealed as a meticulously crafted flake knife. In this astounding, seemingly inhospitable place, the everyday lives of our Stone Age ancestors are evidenced in the rocks at your feet that seem as if they were used and discarded yesterday. 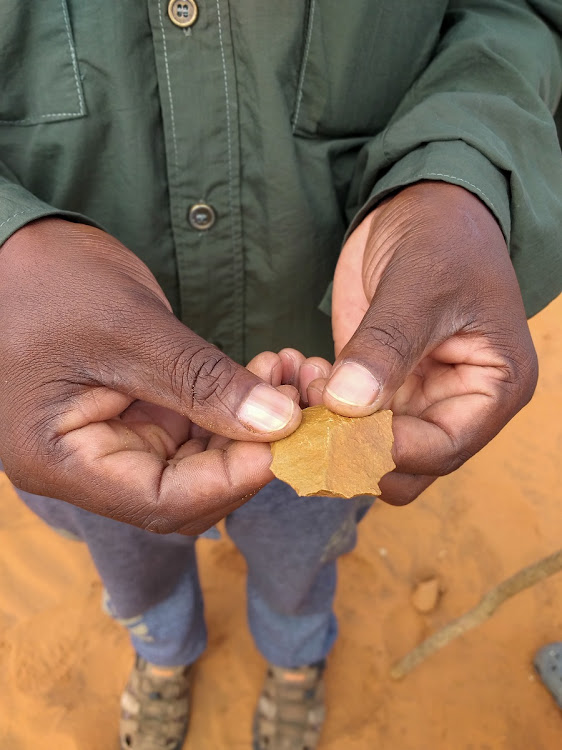 A stone fashioned into a knife in ancient times.
Image: Jaco Prinsloo

Howling gusts whip waves of sand over the shifting crests of the dunes, but it is too soon to leave. For another half hour we scavenge for arrowheads and axes, finding pottery shards and even traces of an ancient fireplace, until we concede and sprint for cover. The hike back to Sikhombe is straight into the now raging southwester, which howls deafeningly around the whipping brim of my hat.

Shoulders hunched forward, unable to converse through the noise and sheer exertion, our party falls into a silent march.

When we’re finally able to take shelter behind the first line of dunes, I’m grateful for the return of easy chatter and a slightly more relaxed hike. When the Wild Coast bares its teeth, it’s an unforgiving and relentless place well deserving of the name.

And then the storm breaks, and the wind calms. Your back straightens and your head comes up, and once more you can see the green of where you’re going. All that remains is a deep-blue horizon and the wispy bank of cloud shading the glaring sun. Suddenly it’s impossible to imagine being anywhere else, or Mpondoland being anything else.

ACCOMMODATION: There are various accommodation options from which the red dune sites can be accessed. These include the community-owned Mtentu Lodge, with safari tents and en-suite cabins on the bluff overlooking the gorgeous Mtentu River mouth, or the Mtentu Campsite, which offers self-catering camping in safari-style tents on raised wooden platforms.

Unearthing a lost city of gold beneath Mapungubwe's bone-dry plains

Straddling the borders of SA, Zimbabwe and Botswana, the starkly beautiful national park is a window into a civilisation that thrived 1,000 years ago
Lifestyle
1 year ago

Alternatively, contact guide Siyabonga Ndovela (071-008-4989 or book via Mtentu Lodge) for a true Mpondoland home-stay experience. You could also stay in Port Edward, which is about 130km away.

GETTING THERE: If you stay in Port Edward, your accommodation provider will supply directions from the Wild Coast Sun. Find out about the prevailing road conditions before you head out. The gravel roads in the area can be challenging, especially during the rainy season, and vehicles must have good ground clearance.

GUIDES: It is vital for the preservation of these sites, and the enjoyment of the visitor, that the red dunes are only visited in the company of experienced guides such as Ndovela or Sinegugu Zukulu.

Zukulu (072-428-5109, zukulusinegugu@gmail.com) offers guided day hikes to the red dunes, as well as multi-day hikes along the Wild Coast for groups of up to 10 people.

BACKGROUND TO THE XOLOBENI MINE BATTLE

In 2002, Australian mining company Mineral Commodities Ltd (MRC), along with local subsidiary Transworld Energy and Resources, announced a proposal to mine titanium from a 22km coastal stretch of Mpondoland.

Some within Mpondoland were in favour, and the department of mineral resources supported MRC’s application for mining rights in 2007. Strident promises were made regarding the potential benefits of the mine, but large sections of the local community were fiercely opposed, forming the Amadiba Crisis Committee to protect their environment, livelihoods and traditions.

A protracted battle ensued, which proved divisive, destructive and at times even violent. The department eventually announced a moratorium on mining in Mpondoland in September 2016, granting the community a temporary reprieve.

In November 2018, the North Gauteng High Court ruled that the rights of customary communities had to be respected, and the government would need to obtain consent from such communities before granting mining licences. Subsequent court victories, such as the one in September 2020 that granted affected communities the right to see applications for mineral licences, have further bolstered the protection of ancestral lands.

Last month, the Western Cape High Court ruled that a defendant in a defamation case may use the so-called “Slapp“ defence, effectively preventing large corporations from weaponising the legal system against civil society organisations and individuals acting in the public interest by bombarding them with frivolous defamation actions. (MRC and its local subsidiary had brought a series of defamation lawsuits totalling R14.25m against three environmental lawyers, two activists and a social worker).

In late February, however, Eastern Cape premier Oscar Mabuyane reaffirmed the province’s commitment to the controversial N2 Wild Coast Toll Road project, which will divert the current N2 highway through the heart of Mpondoland. Local communities fear the highway will simply give miners easier access to the shoreline, thus removing a major obstacle to their plans.

Seven holiday spots where social-distancing isn't a rule, it's a given

For those now accustomed to going without crowds, Sarah Baxter shares some gorgeous but little-known destinations from her book, 'Hidden Places'
Lifestyle
5 months ago

Foreign travel remains tricky thanks to Covid. Luckily our country boasts a wealth of locales that can stand in for some of the world's greatest ...
Lifestyle
2 months ago
Next Article