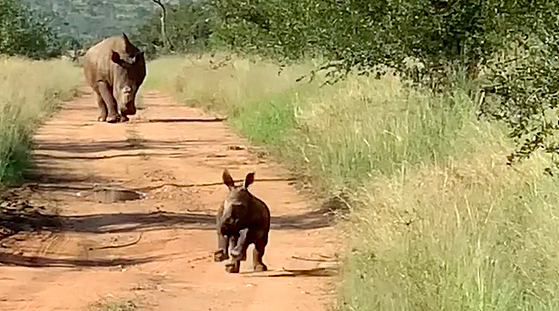 A rhino mother keeps an eye on her excited baby.
Image: Latest Sightings

This video of the “most excited” baby rhino will melt your heart.

Latest Sightings recently shared the video of a rare moment when a baby rhino was excited to see humans.

In it, the baby rhino can be seen running back and forth and walking through mud puddles.

The moments were captured by 37-year-old Darren Sheer while on safari with his family.

“While on a game drive, the ranger saw a mom and baby rhino in the distance. The ranger stopped the safari vehicle on the gravel road, quite a distance from the two rhinos, and waited for them to come closer,” said Sheer.

“The mom and baby were slowly walking down the gravel road when the baby rhino got super excited and started running up and down, coming quite close to the safari vehicle and then running back to its mom.”

Sheer said the moment was almost like “watching a new puppy find its feet”.

According to the environmental affairs department, 394 rhinos were poached in SA last year.

This is 33% fewer than the 594 killed in 2019 and marks the sixth year in which rhino poaching has continued to decrease in the country.

Environment, forestry, and fisheries minister Barbara Creecy said the decrease can be attributed to the Covid-19 pandemic.

“While the extraordinary circumstances surrounding the battle to beat the Covid-19 pandemic contributed in part to the decrease in rhino poaching in 2020, the role of rangers and security personnel who remained at their posts, and the additional steps taken by the government to effectively deal with these and related offences, also played a significant role,” said Creecy.

She said during the hard lockdown period, the department saw a significant reduction in poacher incursions, especially in the Kruger National Park in Mpumalanga.

However, things changed later in the year as the lockdown levels eased. A significant increase in poaching was experienced towards the end of last year, especially during December.

The big five roam among the fynbos on the Garden Route

SA has seen a marked decline in rhino poaching during 2020, with the killing of rhino declining by 33%, environment, forestry and fisheries minister ...
News
1 year ago