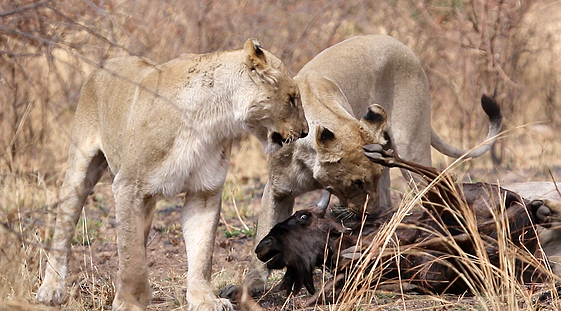 An unlucky wildebeest was a feast for lions after escaping a leopard.
Image: Latest Sightings

An unlucky wildebeest was a feast for lions after escaping a leopard at the Pilanesberg Game Reserve in the North West.

In a video shared by Latest Sightings, the wildebeest can be seen putting up a good fight before losing its battle.

The video was captured by 43-year-old safari guide for Nombekana Safaris, Rodney Nombekana, while on safari with clients.

“I had clients with me from Hong Kong and they were excited to see a leopard. We tried to find one but we had no luck,” said Nombekana.

“On our way back I decided to go to Sable pan and relax and see what animals might come for a drink. While we were watching wildebeests and zebras quench their thirst, I picked up a leopard sighting on the dam wall.

“The leopard stalked and eventually chased the wildebeests at the pan towards our direction. We were parked at the viewpoint and I knew the wildebeests would cross on Sefara Drive so I quickly drove out of the viewpoint. All of a sudden we spotted lions coming from the direction to which the game was running.”

Nombekana said the run-in was the “perfect opportunity” for the lions to stage an ambush as the wildebeests were only aware of the leopard.

WARNING: Video not for sensitive viewers.
Lifestyle
2 months ago

WATCH | Buffalo protects her calf from a leopard ... only to run into a lion

In a video, the mother buffalo can be seen smelling to see if something is in the bushes before finding the leopard.
Lifestyle
2 months ago

A 37-year-old man is expected to appear in the Krugersdorp magistrate’s court on Monday for illegal possession of lion bones.
News
2 months ago
Next Article