A small but growing number of Zimbabweans are going home to help rebuild their country. Among them is Mati Nyazema — the woman who wouldn't take no for an answer, writes Caiphus Kgosana 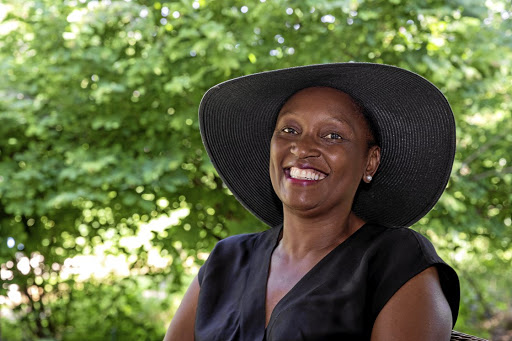 Mati Nyazema packed her dream into a suitcase and boarded a plane to Zimbabwe. It was 2016, and after living and working in SA for 20 years she was convinced that her destiny was to open a high-end boutique hotel in the resort town of Victoria Falls.

Everyone thought she was mad. But being a woman of utmost conviction who refuses to take no for answer, that dream is now a reality.

It's a warm afternoon late in April when she welcomes me to Mbano Manor Hotel with a friendly smile and a touch of elbows. Except for her vehicle and another one belonging to the hotel manager, the parking lot is unusually empty for this time of year in Victoria Falls, a town built on the back of the spectacular falls that are the centrepiece of the majestic Zambezi River.

The elegant mother of four does her best to conceal the stress she's been under over the past year as she ushers me into the foyer, where enthusiastic staff members welcome me with cool refreshments.

Zimbabwe’s entire tourist town of Victoria Falls will be vaccinated against Covid-19 as a way to reduce the spread of the virus in one of its ...
News
5 months ago

Nyazema's dream started off as a mere conversation with her husband in 2016 about their post-retirement plans. What followed was a spirited search for the perfect site and, when that was secured, financial investment.

It saw her knocking on over 100 doors and being turned down over and over again. But her persistence finally paid off and after two years of building, the hotel opened its doors in January 2020.

Trees are the stars of this show.

"As you can see from the design, it was really about leaving the forest alone. With the construction, we only took down two trees," says Nyazema, pointing to the magnificent bushveld that wraps itself around the hotel's modern, whitewashed buildings. Literally every tree on the site has been mapped.

The idea was to build a small, exclusive lodge that would match anything Kruger or the Serengeti had to offer. 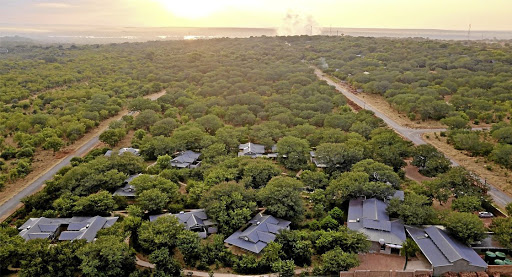 The bushveld wraps itself around the hotel buildings. 'With the construction, we only took down two trees,' says Nyazema.
Image: Mbano Manor Hotel

Nyazema is one of a small but growing number of Zimbabwean expatriates who are going back home to reinvest their energy and expertise in helping to rebuild a country whose economy has been devastated by two decades of reckless policy choices and poor governance.

The choice of Victoria Falls was made easy by the fact that the Zimbabwean government values this tourism mecca - things work in Victoria Falls. It has a constant supply of water from the Zambezi River, the lights stay on and businesses operate largely unhindered. It is a tourism island that gets on with the job of tourism no matter what. It was also here that the government kick-started Zimbabwe's vaccination programme, the first town to achieve herd immunity.

The local municipality has been zoning the west end of the town specifically for tourism accommodation. Mbano Manor Hotel lies at the extreme end of the zone, along with nine other sites earmarked for similar ventures.

It is situated 200m from the national park, and on the other side of its walls is the unspoilt bushveld. It is not unusual to hear lions roaring in the distance or elephants walking along the streets at night. This is a town where humans, wildlife and nature intersect.

Historians are still debating whether the explorer and missionary David Livingstone, on his treks into the southern African interior, was the first European to see Mosi-oa-Tunya, "the smoke that thunders". What we know is he named the falls after the reigning English monarch, Queen Victoria, in 1855.

His statue still gazes over them today, when the population of the surrounding town has grown to 50,000 people. Tourism is its bedrock and provides employment - either directly or indirectly - to most of the locals.

Six weeks after Mbano Manor opened its doors, bad luck struck. The Covid-19 pandemic, which was fast making its way from China through Europe, finally landed in Africa and put the brakes on the hospitality industry. The hotel was fairly busy for those first weeks of its existence, but was forced to close its doors when Zimbabwe went into lockdown at the end of March last year. Now the country is slowly getting back to business and Victoria Falls is welcoming back foreign tourists.

Nyazema knows she is punching above her weight. Mbano Manor is competing with established hotels and resorts that have been catering to tourists for decades. Iconic brands such as The Kingdom, Elephant Hills and A'Zambezi River Lodge have the market cornered and between them receive thousands of guests each year.

But "self doubt" is not part of her vocabulary. She is the first black woman to build from the ground up and own an establishment of this magnitude in Zimbabwe, if not southern Africa, and is ready to fight for its place at the table. 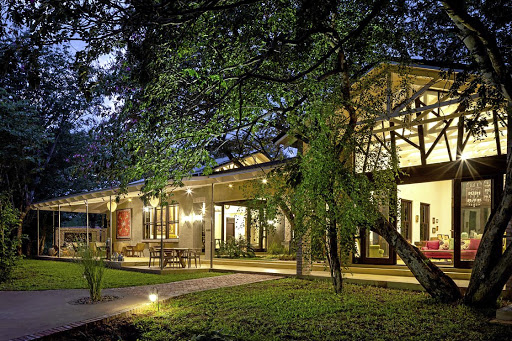 Building Mbano Manor Hotel in Victoria Falls, Zimbabwe, above, seemed like an impossible venture, but the vision and spirited persistence of owner Mati Nyazema made it a dream come true.
Image: Mbano Manor Hotel

After studying the area in 2016, she spotted the perfect site and was introduced to the owner, who was willing to sell. Her next headache was where to find the money to build the kind of establishment she had in mind.

Nyazema has been a tourism professional all her life and the contacts she made during a career spanning more than 30 years helped make it possible.

She started her career with the Zimbabwe Tourism Authority in the 1980s, where she moved from a public relations role to a marketing one.

After five years in the job she got a scholarship to the UK to study towards a master's degree in international hotel management. On her return home she joined Zimbabwe Sun Hotels, which was the country's biggest hotel group at the time, as reservations manager. In 1992 she joined British Airways as sales manager.

"I was the first black graduate to be employed by British Airways Africa. Until that time, the key positions were always held by expatriates."

A promotion to area marketing manager for British Airways sub-Saharan Africa saw her move to Johannesburg in 1996. The city would become her home for the next 20 years.

The seven years she spent with British Airways remain the highlight of her career, she says.

"I was part of a global marketing team; we would rotate meetings around the world. All of that gave the foundation for what you see today. I have so much experience from so many countries and I've actually stayed in some of the best hotels in the world."

In 2000 she joined Tsogo Sun, first as marketing services director and later as operations director, before being appointed executive director of the Sandton Convention Centre, a position she held from 2006 to 2016.

Having spent a good portion of her career as part of a team that launched some of the most iconic hotels on the continent, Nyazema felt the time was right for her to open her own.

"I had actually had 15 years of training on how to open a hotel," she chuckles.

Having worked with professionals who designed hotels from scratch, she called Norman Wallace, who had worked with Tsogo Sun but left to do his own projects. After three months of convincing him to make the trip, Wallace finally arrived, bringing an interior designer, Ryan Illgner, along.

"They got here and they went 'wow'. You could just see the potential … they literally went crazy."

The magic of this place is you have hoteliers who sat round the table and designed a hotel, and spent several weeks designing this place before even involving an architect. Between the three of us we knew the five-star standards; we knew what works and doesn't work

Wallace and Illgner worked on rough sketches, mapping out the secluded sleeping units, each with its own verandah, the foyer, visitors' lounge and the walkways, and how to fully incorporate the forest into the architecture.

"The magic of this place is you have hoteliers who sat round the table and designed a hotel, and spent several weeks designing this place before even involving an architect. Between the three of us we knew the five-star standards; we knew what works and doesn't work."

The building part wasn't easy. Everything had to be imported either from SA, transported from Harare 1,000km away, or from Bulawayo 450km away.

The inspiration behind Mbano Manor Hotel's architecture was a trip to the island of Bali, Indonesia, where Nyazema stayed in a secluded hotel situated in a tropical forest.

"It was exclusive and secluded ... it was absolutely amazing," she says.

She was told that for her dream hotel to work it had to be near the Zambezi River or the falls. She went against that advice and opted for a secluded spot in the forest.

Zim has a big elephant problem, but is culling the answer?

It’s got Africa’s second-largest elephant population and says it can no longer afford their cost. Conservation groups disagree
News
4 months ago

The price tag for her project came to around $7m about (about R98m). Although she and her husband, Norman Nyazema - a renowned professor of pharmacology and businessman - had done well professionally, it would require external funders.

Nyazema started the search for money in SA after putting together a comprehensive 44-page prospectus with all the financial projections. But no-one was biting. The Industrial Development Corporation even flew investment professionals to Victoria Falls to inspect the site but decided against investing.

Eventually, private pension funds in Zimbabwe opted to invest through a measure of debt and equity. Pension funds investing on behalf of sugar producer Tongaat Hulett and banking giant Standard Chartered came on board with construction funds.

The hotel employs 18 people, most from the local townships. It had to reduce staff from an initial 26 due to the lockdown.

Why risk that much in Zimbabwe, a destination that is still volatile politically, socially and economically?

"Because I was born and bred in Zimbabwe, that's my country. My husband and I are fortunate; we are the generation that had it good. Our kids went to good schools, we had good jobs and we genuinely believe we are part of the solution to build in Zimbabwe.

"I've had young people come here and they want to spend five minutes with me and ask 'How did you do it?' I say to them 'You roll up your sleeves, dear, and you work'.

"There is nothing for free."