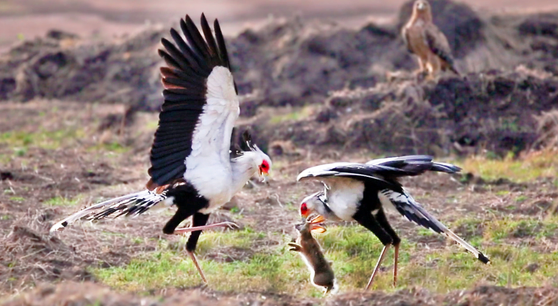 Two secretary birds on a hunting mission had no mercy for a hare.

In a video shared by Latest Sightings, the birds, which generally prey on small rodents, amphibians and reptiles, can be seen hunting and killing the hare.

The hare can be seen trying to duck the two fierce birds but they eventually catch and kill it.

The video was captured by 38-year-old Grant Telfer while doing guide training in Kichwa Tembo Camp in Masai Mara in Kenya.

He described the sighting as “unique”, saying he had not seen nor heard of similar footage since he started guiding in 2004.

“We have seen them catch locusts and small snakes in the past but never a mammal of such a size.

“It is documented in books as a possibility but I am not aware of anyone filming them hunting like this,” he said.

WARNING: Video not for sensitive viewers.
Lifestyle
3 weeks ago

A territorial elephant was not in the mood to share its chilling time in a river with more than 25 hippos and crocodiles in Shingwedzi in the Kruger ...
Lifestyle
1 month ago

When a tourist recently visited the Kruger National Park, the last thing they expected to see on a game drive was a wild food fight between a lion ...
Lifestyle
1 month ago