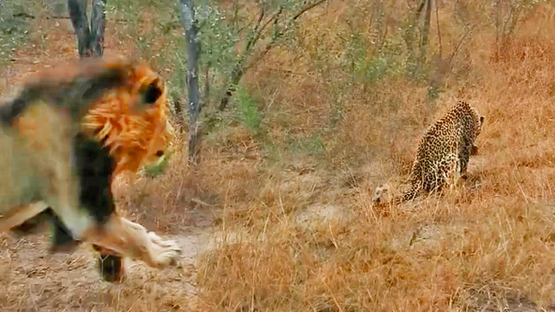 A male lion gave a leopard the fright of its life at Greater Kruger National Park.
Image: Latest Sightings

Two of SA's Big 5 gave guests of Safari Lodge, Greater Kruger National Park, an adrenalin-filled sighting after a lion tried to pounce on a leopard, giving it the fright of its life.

In a video shared by Latest Sightings, a lion can be seen stalking a leopard while the leopard has its sights set on an impala.

In a split second, the lion makes a move for the leopard — only to scare it away.

The video was taken by 36-year-old Ahmed Laher who was on a game drive with his safari guests.

Laher described the sighting as “nail-biting”.

“We found a leopardess relaxing under a tree. We sat and watched her for about 20 minutes. She eventually got up and was in stalking mode and very focused on what was ahead of her,” he said.

“She kept looking out while stalking impala and unknowingly was being stalked herself. After about 15 minutes of watching her, we got a visual of a huge male lion behind us, slowly closing in on her. At that moment, we knew it was time to be quiet and watch two of the big 5 in one sighting and see what was about to unfold.”

“She ran into terrain that she knew would be to her advantage and up a tree to the highest point, where she knew a lion would have no chance of getting to her. She stayed up in the tree, and the male lion took a nap under the tree waiting for her. He eventually got tired of waiting and wandered off.”

WARNING: Video not for sensitive viewers
Lifestyle
1 year ago

The video shows the pack of wild dogs chasing the impala into a dam where it ducks and dives to save its life.
Lifestyle
1 year ago