WATCH | One feisty crab bosses a pride of lions 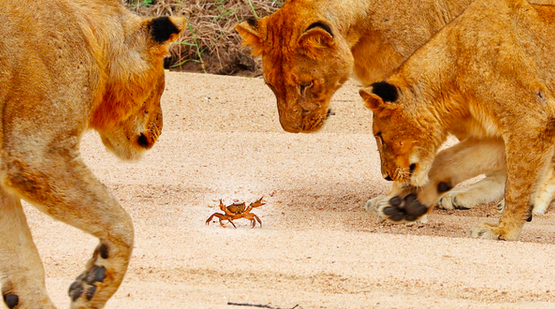 The crab managed to keep its claws up at the lions as it backed up until it made the bank and disappeared into a burrow.
Image: Latest Sightings

One feisty crab showed a pride of lions at the MalaMala Game Reserve bordering the Kruger National Park who was boss, despite its size.

In a video shared by Latest Sightings, the pride can be seen going claw-to-claw with the wild four-inch crab.

The crab raised itself to its biggest height and put on a show with its claws in the air to “fight off” the lions before they lost interest.

The crab managed to keep its claws up at the lions as it backed up until it made the bank and disappeared into a burrow to safety.

Watch the encounter below

The clawsome encounter was captured by rangers Ruggiero Barreto, 30, and Robyn Sewell, 27.

The rangers said they didn’t expect a lone crab to stand up to a pride of lions.

“We noticed one of the sub-adults get up and start staring at something and at first we thought it was a scorpion, but it was a crab,” said the rangers.

They said crabs in the area normally only come out after dark, but this feisty fella was crossing the river in daylight and aroused the curiosity of the lions.

“The lions were surprised by the appearance of perhaps something they had not seen before and the first lion went over to investigate. The crab went up on its back legs and had its claws at the ready,” they said.

“The poor little fella was trying to make it to the riverbank, where its burrow was, when more lions came over to check it out until there were five of them.

“Not many betting people would have given the crab good odds, but this little fella was up for it.”

The lion thought it was being smart by walking slowly behind the leopard.
Lifestyle
1 year ago

Kwandwe the lion captured, will be safely returned to reserve near Pretoria

A nine-year old Asiatic lion has died from the coronavirus in a state-run zoo on the outskirts of the south Indian city of Chennai, the zoo said on ...
News
1 year ago