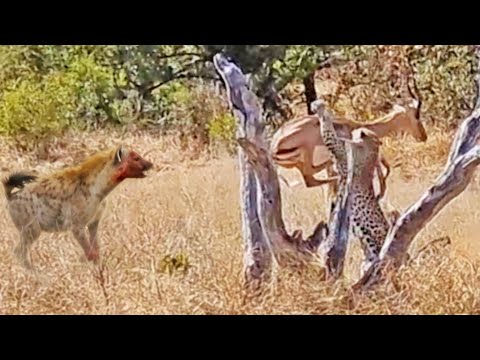 A female leopard in the Kruger National Park thought she had done well when she grabbed an impala for lunch, only to have to face a hyena determined to steal the buck off her.

The animal, who has been dubbed the De Laporte Leopard for her annual visits to the De Laporte waterhole in the area near Skukuza, is known to lie in wait for unattentive prey that come to the hole to drink.

According to Latest Sightings, she recently pounced on two impalas that had walked straight into her ambush.

It was a glorious sight as she caught one of the impalas in midair.

But she was soon challenged by a nearby hyena.

What followed was a hectic showdown that had onlookers watching in amazement.

Footage of the showdown was captured by Gerrie Smit, 63, a field guide for Kruger Gateway Safaris, while on a game drive with his wife.

“I know people say it often but it truly was a once-in-a-lifetime sighting. We were at the right place at the right time,” he told Latest Sightings.